Storm clouds gathered in Laois today and unleashed a hefty summer shower on Portlaoise as the abnormal summer continues.

In its forecast Met Éireann predicted scattered showers on Friday with some limited bright or sunny spells, the best of these in the northern and western areas.

It said the showers will become more widespread this afternoon, some heavy with the chance of the isolated thundery burst this evening. Top temperatures 11 to 15 Celsius. Met Éireann said winds would be light to moderate and variable in direction but fresh southeasterly along eastern coasts later today.

In her forecast after the RTÉ news on Thursday, meteorologist Siobhan Ryan said Ireland had experienced double the average June rainfall and temperatures were below normal for the month. More below picture 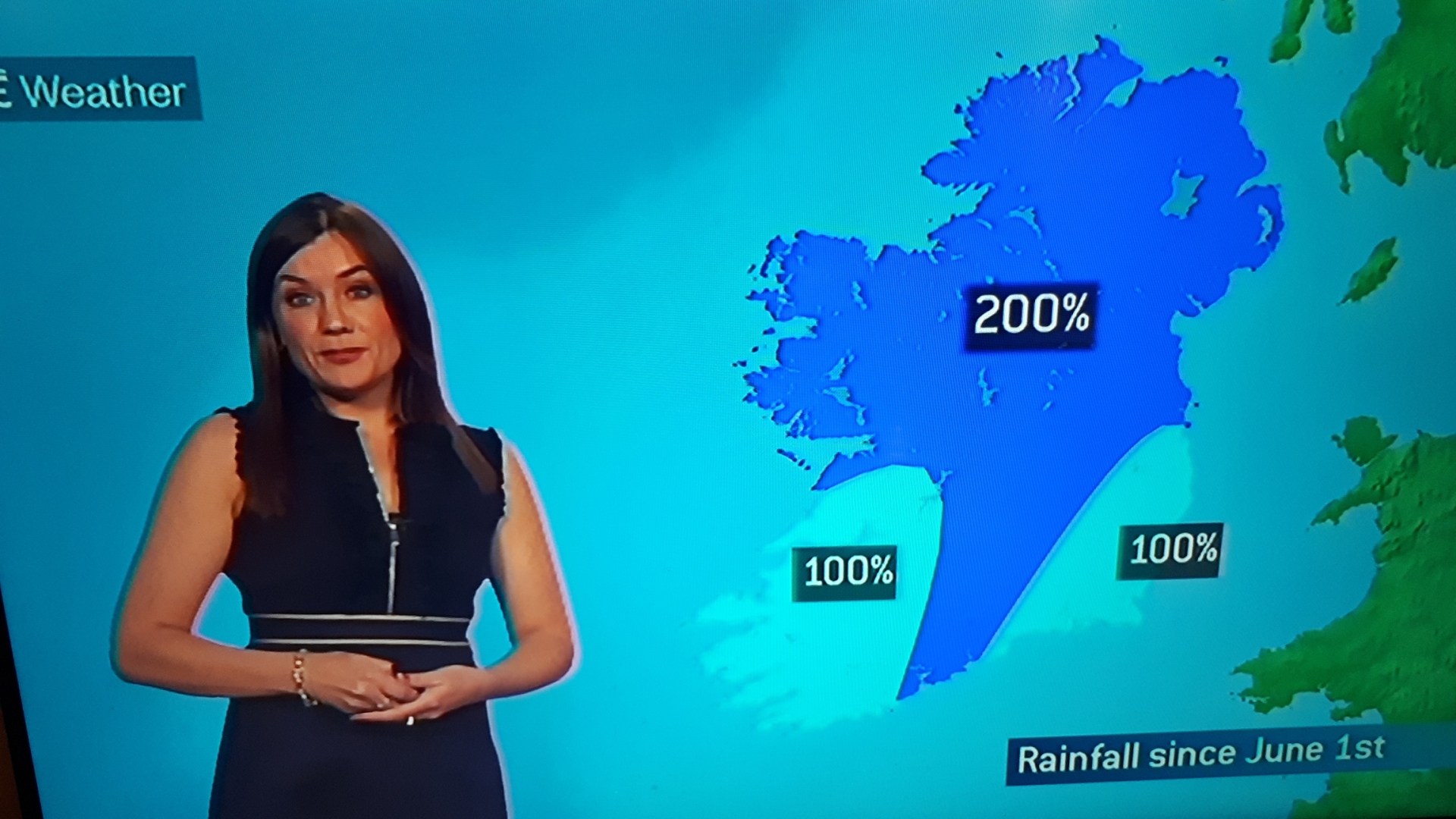 TONIGHT - FRIDAY 14TH JUNE
Further showers early tonight. However a spell of rain will affect much of Leinster and Ulster tonight and overnight, the rain heavy at times with the risk of isolated thunder, elsewhere showers will become more scattered with clear spells developing. Lowest temperatures 3 to 8 Celsius in light to moderate variable breezes. Misty in places with a few fog patches developing.

TOMORROW - SATURDAY 15TH JUNE
Any rain lingering over Ulster and parts of north Leinster soon clearing. Then a bright, fresh day countrywide with sunny spells, but some scattered showers about also with a few heavy in the afternoon. Top temperatures 13 to 16 Celsius, in a light to moderate southwest or variable breeze.

NATIONAL OUTLOOK
General: Cool and showery at first, with some heavy showers at times. Occasional sunny spells too, but temperatures below normal for mid-June in the short term. More seasonal temperatures expected from around Sunday onwards. Staying largely unsettled though, with low pressure remaining close-by.

Sunday: Widespread showers for Sunday. A few bright or short sunny spells, but the showers will be fairly widespread by lunchtime. Many will be heavy in the afternoon and early evening, with possibly a few thundery downpours in places. Top temperatures 14 to 17 C in light to moderate south to southwest winds, which will be occasionally fresh and gusty near south and southeast coasts. Further showers overnight. Lows of 8 to 10 C.

Monday: Further showers expected on Monday, heaviest and most frequent in the west and northwest with longer drier and sunnier intervals elsewhere. Top temperatures 14 to 18 C in moderate southwesterly winds. Mostly dry and clear overnight. Lows of 6 to 9 C.

Tuesday: A few showers, but mostly dry and bright, with cloudy and sunny periods. Top temperatures 17 to 19 maybe 20 C, in light to moderate variable breezes. A spell of rain looks likely to move up over the country on Tuesday night.

Wednesday: Mostly cloudy with occasional rain, but brightening up from the west later in the day. Top temperatures 14 to 18 C in light variable breezes.