A small Laois school has beaten off lots of competitors to win two prizes in the annual FÍS Film Awards for two lovely short festive films that you can watch right here.

Gaelscoil Shlí Dála in Ballaghmore which has 42 pupils has just scooped the Outstanding Acting award for their 5 minute film Carúl na Nollaig (based on Dicken's A Christmas Carol).

They have also won the Outstanding Animation award for a second film called Simon agus an Sneachta. Watch that below.

The short films were created by pupils from 4th, 5th and 6th class.

Their success is a silver lining to the Covid-19 restrictions that were imposed on schools last year and forced them to think of other ways to perform their usual annual dramas.

"We were lucky because we filmed them during first term last year. Carúl na Sneachta was our Christmas drama but instead of in person for parents they could watch it at home. It was much longer but we cut it back to five minutes for the FÍS entry.

"We normally perform for the Féile Scoil Dramaíocht every year. Because of Covid we couldn't enter that but we did it on film instead," she said.

"The staff and parents are very proud of the pupils. It is a great achievement. We're a small school and like others we struggled through Covid. It wasn't easy. The children gave it their all and embraced the new challenges. This was well deserved by them, we are all so proud," she said.

The FÍS awards ceremony, normally a big event in The Helix in Dublin, was held live online during schooltime on Wednesday, November 24.

"The whole school was watching, obviously in their own separate bubbles," the principal said.

Below: the children celebrating with their trophy. 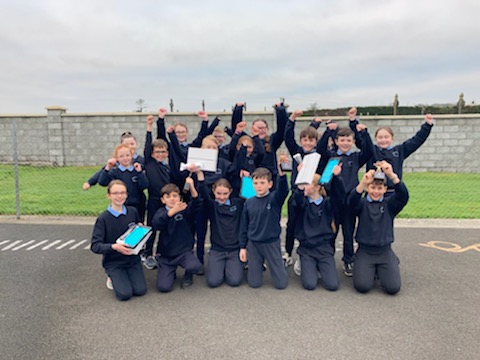 The FÍS Film Project is a collaborative partnership between the Institute of Art, Design & Technology (IADT) and the Professional Development Service for Teachers (PDST). The initiative encourages children to explore the medium of film in the primary classroom by holding a competition every year for 5 minutes films.

WATCH: Absolute joy for Laois schoolkids getting their new pitch

WATCH: Absolute joy for Laois schoolkids getting their new pitch