A major new road through Portlaoise has been officially opened to traffic this morning Friday November 1.

The Portlaoise Southern Circular Route Extension cost almost €8 million to build. The half kilometre stretch of road is the last link in a loop south of the town centre, opening up land for development, pulling heavy passing traffic from the town and giving a new link to schools and shops.

Minister for Justice Charlie Flanagan cut the ribbon, having already blown out the candles that morning for his 63rd birthday.

"This is a major infrastructural project in our town, a long time in the coming. It will give improved access to schools and open this area for private development, the continuance of commercial growth and a new courthouse," he said.

It was an extra special day too for Cathaoirleach Cllr Willie Aird. He has lived on a farm beside the new road all his life.

He thanked council and designer officials for talking to residents affected, and recalled many a story of walking cows across the road. One story he told was from the height of the troubles when his crossing cows forced the armed escort for the then Minister for Justice Dessie O'Malley to stop on the road, and his goat charged at a detective.

He expressed hope that the wide bicycle paths on the new road will be well used, and wished all a safe passage on the road.

The CEO John Mulholland acknowledged the patience of residents and businesses affected during the 15 months of construction.

He said the new road will give the council scope to alter James Fintan Lalor in favour of pedestrians, cyclists and retail and cultural life.

The speed limit on the new road is 50km/hr. An art piece will follow this winter at the Abbeyleix road end.

The road and all who built it and will use it, was blessed by Portlaoise PP Monsignor John Byrne and Reverend Peter Tarleton.

It was built by THM Ltd, paid by Transport Infrastructure Ireland. The 12 month contract was due to complete last July 29 but overran three months. Director of Services for Roads Simon Walton said that this was due to the complication of building roundabouts either end whilst keeping traffic open, with 15,000 vehicles a day on the Abbeyleix road, and 10,000 a day on the Timahoe road.

Some residents also attended the opening.

Kathleen and Paul Mulligan live on the Abbeyleix road and are now further back from it with the new road plan.

"We are very happy with it. It is an awful busy road, we find it quieter now we can't hear the traffic as much," Kathleen said.

"We will definitely be using it. We have to get walking and it will be lovely for us. We are still all happy neighbours on the Abbeyleix road," she said.

Below: David and Pauline Sweeney and Kathleen and Paul Mulligan from the Abbeyleix road in Portlaoise at the official opening. 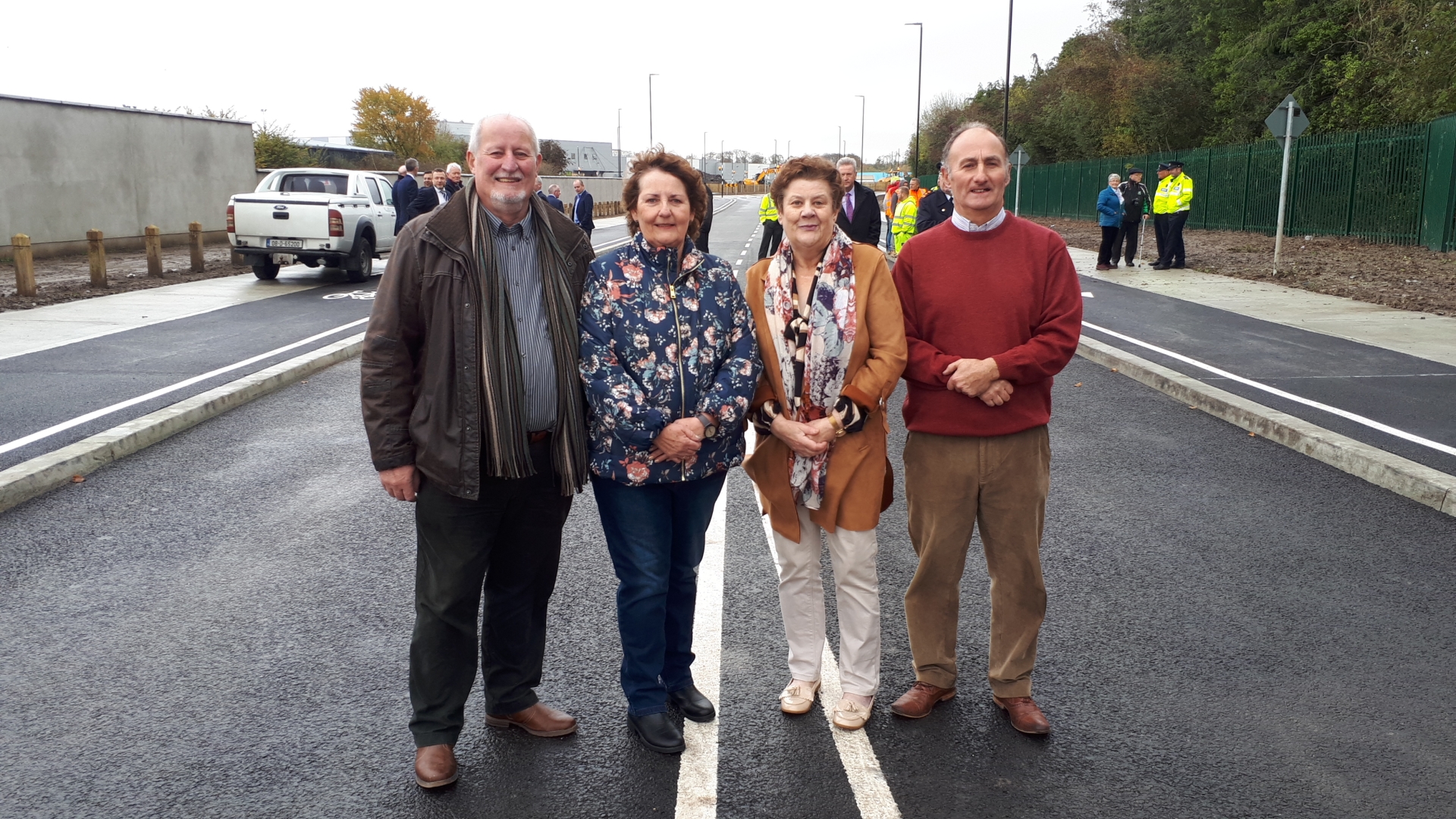