Headphones that help people with autism are the sound business invention of a Laois teenager, who has today won first prize in the Laois Student Enterprise awards.

Alice Carew, 16, from Mountrath Community School, will represent Laois at the national final in Croke Park in May.

A delighted Alice spoke to the Leinster Express at the county final, in the Midlands Park Hotel today Wednesday March 7.

"I'm delighted, I think this will really help to get the product out there, that people will take it seriously. Coming into this competition, I wasn't expecting to win, I was just looking forward to getting more people aware of Lulls. Getting to the final is really exciting," she said.

Earlier during the exhibition of 27 projects from seven Laois schools, Alice explained her project to the Leinster Express.

"I went to Timahoe National School where there is an early intervention autism unit. I noticed that if the room was noise, children got distressed and put their hands over their ears. I did some research and I found out how common sound sensitivity is. There was nothing on the market, other than isolators, which are like earmuffs that cut out sound, but literally isolate the child," she said.

First Alice programmed an arduino board, which she described as software with a circuit board that can be programmed. She attached it to headphones, and trialled it at Timahoe NS.

"The feedback was to make it wireless, and in one piece. So I contacted a manufacturer in China and we were in touch for a while but I didn't have enough capital to buy a minimum order. I went to TSI Flowmeters, a business in Portlaoise, and they gave me a loan of €10,000. For every sale I make, I give back 30% to them off the loan," Alice explained.

She thanked her parents Martina and Tim Carew for their advice on her project, and her teachers Rita Moore and Evelyn O'Driscoll.

The snug red headphones, with the brandname Lulls, are not yet officially launched but she has already sold 12 sets.

"The feedback is good, it really touched my heart to see the difference they made. It's one thing in theory, but to see it make people happy is wonderful," said Alice.

"I am going to start a trial to study the difference they make. Twenty children with autism will keep a two week diary, and then another two week diary using the headphones. After that I hope to launch Lulls at a conference of Laois Offaly Families for Autism," Alice said.

Lulls come with an SD card that is is customisable, you can put on any music or sound file you want, and they are cordless.

"If a child is unhappy, their parents are too, and that is not good for families. I hope Lulls can make a positive impact, and make people happier. I hope to sell them all around Ireland, and that a lot of schools will have some, even mainstream schools, for anyone with anxiety, adhd or just having a hard time," she said.

Lulls headphones retail at €69.99, including an SD card and carry case, contact Alice at info@lulls.ie to find out more or see www.lulls.ie 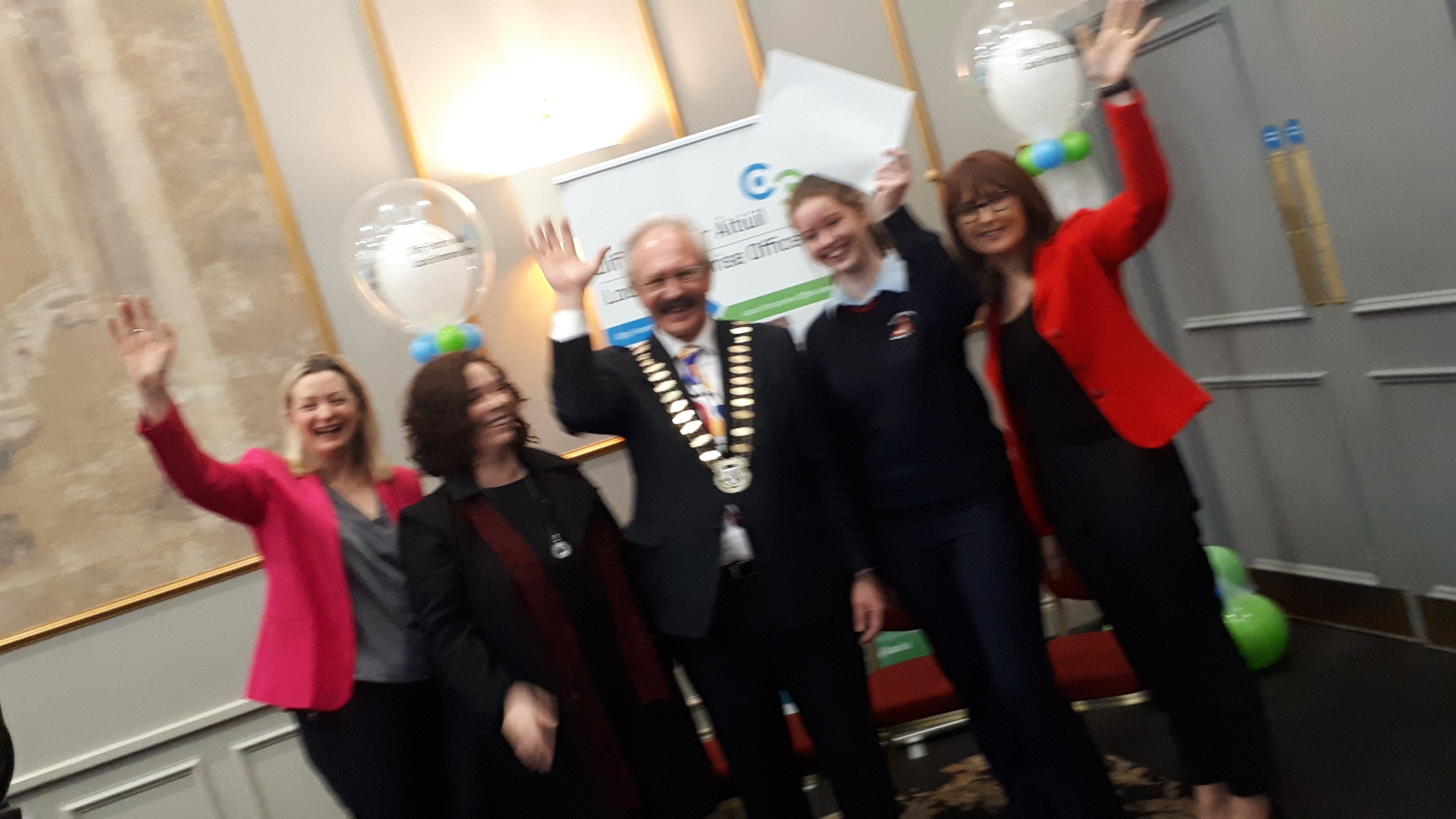 Other prizewinners at the LEO Student Enterprise Programme 2017/18 County Final. 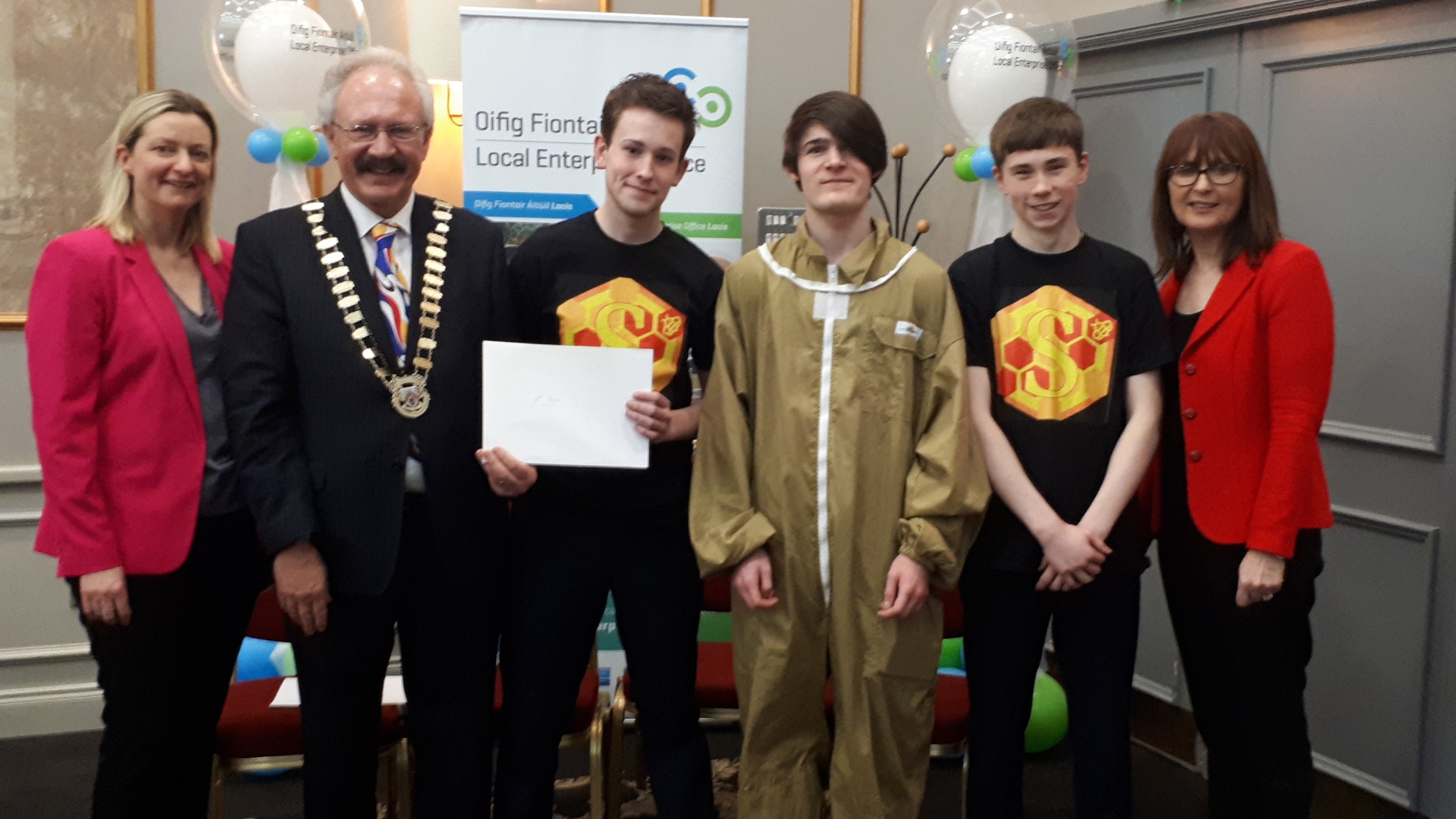 The Business Innovation Award went to Kris Kindling from Coláiste Iosagáin Portarlington. Team Ben Slevin, Sean McCloskey, Adam Maher and Billy Whelan sourced free offcuts of wood from a local furniture company and cut and package it to sell in local shops as kindling for €2.50. Already they have made a profit of €920 and intend to make more this summer to sell again next winter.

Evelyn Reddin is the CEO of Laois Local Enterprise Office.

"The standard was very high, every year it is improving over the past 15 years. It is a great initiative for students to take part in because they gain life skills as well as business skills. Lulls is out on its own, it's a good project to bring to the national final. If Alice wants to pursue it, we at LEO will be happy to support her going forward," Ms Reddin said.

The judges were PJ Ralph, head of county at Bank of Ireland, Patricia Frayne, Co-ordinator at Portlaoise Enterprise Centre and Clair Dunleavy, Kildare Local Enterprise Board.

The programme was co-ordinated by Sean Ryan.

Full report and photographs in next Tuesday's Leinster Express.