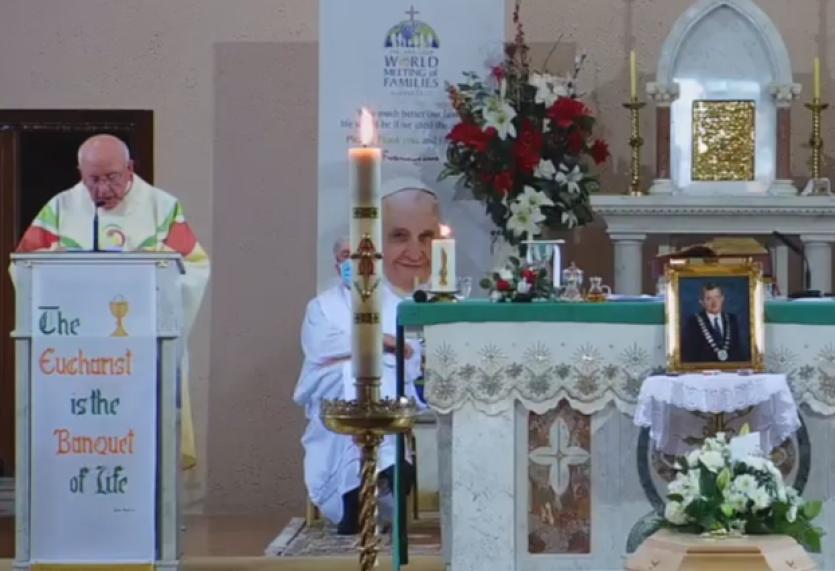 Ballinakill's Parish Priest Rev Fr Sean Conlon was welcomed to Laois in 1990 by the then Laois County Councillor Marty Rohan, and they subsequently became great friends.

It was perhaps fitting and an honour for Fr Conlon that he was he the celebrated Marty's funeral Mass on Thursday, July 22 in St Brigid's Parish Church.

Listen to the audio of the homily above or read text below.

"Here in Ballinakill we have we have lost a dear loyal friend in Marty Rohan. We too are upset, disappointed and lonely. Particularly the neighbours and friends, we feel a lot of pain.

I understand that because I too in my own family once or twice suffered the same way. So I understand how people feel. And it's not a bit to be embarrassed if one feels like a tear, a little cry. A little something that shows you loved who you're talking about in a special way.

Marty and I spoke about this a few times in the last couple weeks and months. Now, he said: "No speeches, people giving rubbish or bull or a word something like that".

And I said: "No Marty. I feel the same way. I hope that will be the same when my day".

Marty was county council Chairman, three or four times.  That was a great honour for himself, his family but for the community here at large.

Marty took his job very seriously. He was a very popular Chairman, especially among the staff in Áras an Chondae in Portlaoise.

Any time I was in there, the staff would ask about Marty because he was a proper gentleman.

We insisted many times when we had a meeting here (and he was chairman), that "now you're Chairman Marty" we would say to him, "you should get this done". But he would say: "I am Chairman of Co Laois and Ballinakill is part of that". He said: "I am and will do my best".
Did he do his best? He sure did. Look at all the things he achieved. And as he says himself, many more could have been achieved and should have been that weren't.

But houses were bulit, electricity was updated. The roads were improved. And lots of little things the we don't know he was doing helping people, helping organisations, helping committees.

There were also little things that we don't know, he was doing - helping people, organizations, committees. The number of times that he helped people that no one in the world would ever know, yes there are plenty and we said thank you Marty.

Local people certainly benefited, those we don't know that he never wanted it to be known.

Marty himself was involved in everything. I could list out a heap of committees.

Marty was either Chairman, Secretary on the committee started, worked through it and handed it over to others.

He was chairman of he Midlands Health Board. And is ironic that he led the protests with others to keep Abbeyleix Hospital open, and that's where he died. A happy man in the building.

The staff were so, so good and helpful to him. But is is only right because after all, it would have been closed only for him, I feel in my heart.

All the other things that he was involved. I was sorry, he didn't live to see in full action the swimming pool at present. Because that was something he started.

For all the committees that have been there down the way, Marty was there pushing for them. I'm sorry, he didn't live to see the finished article today. Because it's lovely. And the children and the community and the surrounding areas are getting the benefit of it.

He started on the new school with with Father Kelly. Then when I came (to Ballinakill), he came with me a couple of times to get the school up and running, and was a great help. He knew what to do, where to go and what to say.

Marty was one of the first to welcome me and my family to Ballinakill on the fourth of August 1990. The week after, he welcomed me to his home to see Paddy, Lily and his mother.

The second day I was up I come in the back door. Mrs. Rohan didn't expect me or anyone and she was smoking. That time the PP was not allowed to see somebody, I think because she closed her hand when I walked into the kitchen and said Howya mam.

After a few minutes, I said, Mrs Rohan take that cigarette or it will burn the hand off ya. And she nearly died.

She said to Marty after, I was so embarrassed the PP saw me smoking. Thanks be to God times have changed. But I'll never forget that. I became very friendly with Marty, Paddy and Lily ever since, a friendship I'll never forget.

May the Lord look upon your two brothers Lily; look upon Marty now Paddy, mam and dad and above all may he look after you.

You had two great brothers and they had a wonderful sister and now it's up to them to help you as you helped them and I believe they will. May the Lord look after you and give you health in mind and body.

To Mary Costello, you're such a dear friend for looking after the Marty in the last month or two or more. And, I can understand your feeling that they've made upset. It is understandable.

And there's other people, neighbours and dear friends. You'd like to be mentioned the same time. You don't want to be.
May God bless you. And I said thank you on behalf of Marty for that.

Marty was a famous proud Ballinakill man - a real gentleman. It is unknown the help he gave to people young and old not alone here in the parish but in the surrounding parishes in the county.

Marty was on the phone night noon and morning to different places in the parish and in the county.

May God bless you. May God reward. You fought a great fight. You kept a wonderful faith.

May the Lord reward and to you say to you when he meets you at that Gate.

Welcome, good and faithful servant. You're faithful on earth now enjoy your reward. May You Rest in Peace an on behalf of everybody. Thank you.