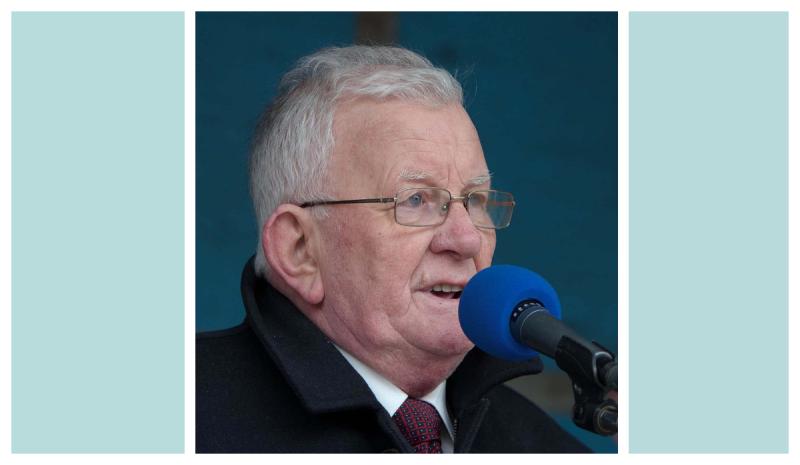 Late Marty Rohan speaking at one of the two big protests he helped to organise to save Abbeyleix District Hospital in 2011 Picture: Alf Harvey.

Tributes have flooded in following the death of one of the longest serving public representatives in Laois.

Marty Rohan of Raggetstown, Ballinakill passed away on Tuesday, July 30.

Aged in his late 80s, he is deeply regretted by his loving sister Lily, relatives, neighbours and friends.

The Fianna Fáil representative served as a councillor on Laois County Council for the Borris-in-Ossory local area from June, 1974 through to 2004. His term in politics was split. He was not returned in 1991 but was co-opted back in 1997 and was successful at the 1999 election.

He defeated another local man and recently deceased Aidan Kennedy by small margin to take the seat on the council.

He became chairman of Laois County Council on a famous day for Irish sport. He was elected as first citizen of his native county on June 25 1990 the day on which Ireland defeated Romania in a penalty shoot-out in the Italia 1990 World Cup.

He celebrated in Dunphy's pub in Ballinakill that day with others in attendance on the day was Cllr Tom Keenan.

He also served as Chairman of the Midland Health Board for nearly a decade in the 1990s as part of of a long stint starting on 1981 on the since dissolved body that oversaw the running of health services in Laois and other midland counties.

Mr Rohan was involve in multiple local organisations in Ballinakill ranging from the Tidy Towns, the vintage rally to the local swimming pool along side the community bingo. He served as Chairman, Secretary and Selector with Ballinakill GAA for whom he also played hurling and football. He was also heavily involved in Ballinakill's mart development.

He was also heavily involved in the village renewal scheme in Ballinakill an plaque for which was erected beside the National School in the village at the time.

While he worked with many people during his time in the communty, one of his closest allies on projects was the late Christy O'Shea who also died in 2021.

After leaving politics Mr Rohan stayed active in his community and was to the fore in a big campaign to halt the closure of Abbeyleix and Shaen community hospitals.

While not married, the former councillor was a dedicated carer for his brother Paddy who predeceased him.

"He was a man of huge commitment and dedication to every organisation he got involved with. I got to know him through Fianna Fáil, he and my father were councillors together. He helped me an all my general elections and got to know him as a low key but committed to the ideas of Fianna Fáil but always worked for all the community regardless of their politics," he said.

"I was saddened to hear of the passing of former Cathaoirleach of Laois County Council, Cllr Marty Rohan. Marty represented his community in Ballinakill with diligence and pride for many years. Deepest sympathies and sincere condolences to his family on their sad loss," said the Fine Gael representative.

"I first crossed paths with the late Marty Rohan in the mid-1990s and I have had the pleasure of meeting him in recent years during which time he was enjoying life as a retired public representative.

"Marty was a decent and generous man who always thought of community first. If ever there was a definition of salt of the earth it was Marty. No frills no fuss, just a commitment to helping others and to getting things done in a nice quiet fashion.

"What a lovely gentleman and what a sad loss to his family and local community. I am so saddened to hear of his passing," he said.

Apart from his dedication to local politics as a county councillor, Mr Moloney said his former colleague made the health services his priority. He said he campaigned through out his career for all the local hospitals especially the community hospital in Abbeyleix which was threatened with closure in 2011.

"Many would believe he was the mainstay in keeping Abbeyleix open," he said.

He chaired the Friends of Abbeyleix Hospital for many years and helped raised funds for services delivered there.

The former Minister paid tribute to the deceased's humanity as evidenced in the care he provided to his brother Paddy often described as Marty's secretary.

"Marty was absolutely devoted and dedicated to his brother Paddy and they were great friends. Paddy would have been referred to as Paddy's secretary," he said.

A lifelong member of the Pioneers, the deceased worked for a time in PJ Bennett's Bar and grocery in Portlaoise.

He was also the first Chairperson of the Laois Drama Society and was a noted actor in his time.

Numerous tributes have also been paid in RIP.ie in the condolences section.

Due to current Government guidelines, a private family funeral will take place. The Funeral Mass will be celebrated on Thursday at noon in St. Brigid's Church, Ballinakill (max 50 people) and can be viewed on the link HERE.

Mr Rohan's remains will be laid to rest afterwards in St Brigid's Cemetery.