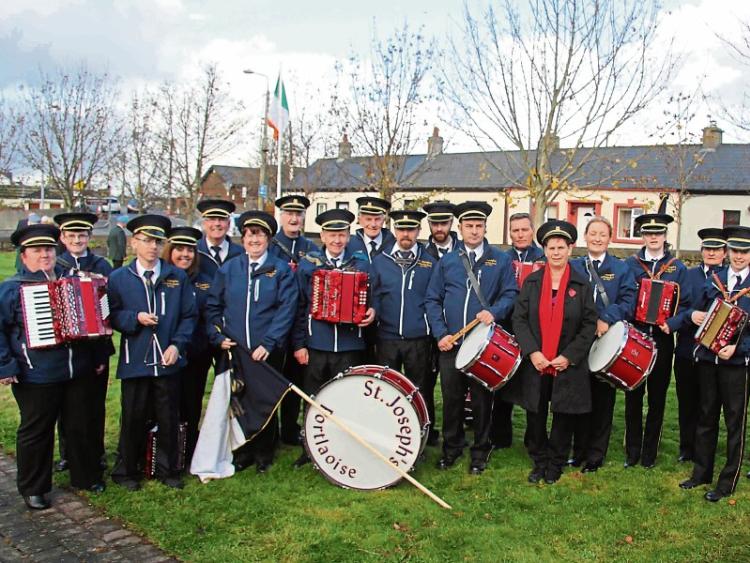 The renowned St Joseph’s Accordion Band in Portlaoise is “crying out” for new drummers and accordion players, and is willing to train them up for free.

The band celebrates 60 years in existence this year, and its members are still as loyal as ever, with some members lasting for the whole of that time.

There are now reasons, both joyous and sad, that have prompted Bandmaster Peter Smith to put the call out across Laois for new players.

“We are down about five members. Three have sadly passed away in the last two years, and two of our side drummers have announced pregnancies just in the last couple of weeks,” he told the Leinster Express.

“ Naturally they can’t carry the heavy drums when expecting, so they have to take a break but we do hope they will return, and we are delighted with their good news,” he said.

“We travel all over Ireland to perform, as well as in St Patrick’s Day parades, and at Christmas and New Year in Portlaoise,” Peter said.

Training is given free of charge, as are the bandmembers’ smart navy uniforms.

“We train weekly at our base in Grattan Street in Portlaoise, every Monday night at 7.30pm. We need both button and piano accordion players as well as drummers,” he said.

“We welcome new members aged 12 upwards, from all over the county, come and bring a friend,” Peter said.

The band plans to publish a book celebrating their 60th anniversary in the coming year, with photos of their many performances in Ireland and Europe in that time.

“There is a terrific family atmosphere in the group, we are all friends. I’m in it 58 years but we have several members who are in it from the very start, with a whole range of ages,” he said.

Their current oldest member is the active Tommy Glennon, 82.

“He was busking in Fatima only two months ago, after buying himself a new button accordion in Alo Donegans. He plays in the church every morning, he makes you want to live and never worry,” said Peter, who has recently welcomed Pat Reddin to support him as joint bandmaster.

The band will next play at the two county finals in Portlaoise in October.