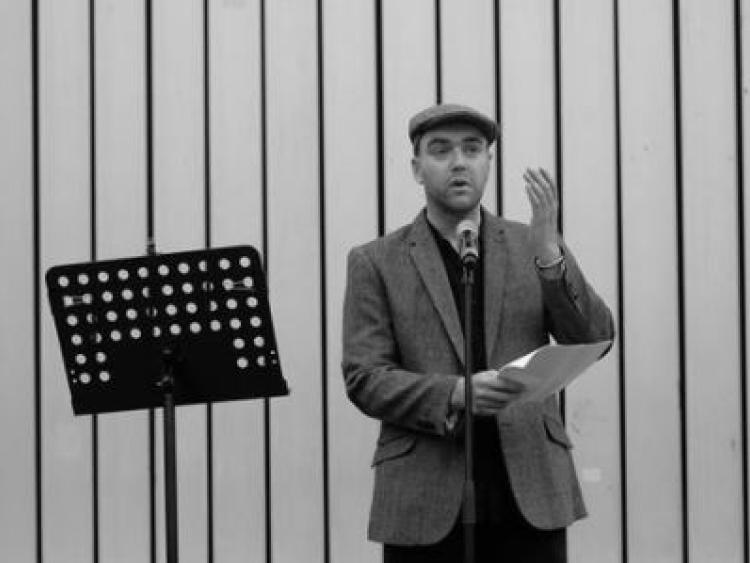 A new Spoken Word resident has been appointed for county Laois as part of an exciting and creative new project.

Dunamaise Arts Centre and Laois Arts Office, with the support of the Arts Council and Creative Ireland are introducing Stephen James Smith from Tallaght, Co. Dublin as the new Spoken Word Resident for Laois.

Stephen is one of the most well-known modern day poets in Ireland and he has big plans for Laois.

His work encompases the spoken word through poetry and the new digital era of communication.

Inspired by the theatre from a young age, James has written a play which toured Ireland, parts of the UK and France.

He is well known across the open mic performance nights around Dublin for his poetry, creativity and bringing people together through these kind of events.

One of James' biggest ambitions for his 21 week residency is to leave a sustainable poetry group which performs at Electric Picnic every year.

“I am a poet, playwright and I curate events and I do a lot of work with kids which is tied in with this residency. I sort of fell into poetry I did mechanical engineering when I first left school, I dropped out of that as I was sick, I started writing songs around 16 years old, I was playing a bit of guitar and when I was 20, I started writing poems but I didn't think I would end up doing this full-time.

“It is a surprise for me as well but I kept on writing away, I heard about an open mic night and went on to that and it just opened my eyes up to poetry and this scene that I hadn't really been part of before, I got to make friends there and was encouraged, that helped me to develop a bit more and I got more gigs and got to travel with it then,” he said.

Stephen is most famous for two poems in particular. One is called “Dublin You Are” which he wrote for the city’s Capital of Culture bid and another called “My Ireland” which he was commissioned to write for the St. Patrick’s festival.

Stephen's work has over 700,000 YouTube views and he has over 1 million hits online in general. Stephen has become a sensation in the world of 21st century poetry.

What is “Spoken Word”?

Despite believing that “poetry is a hard sell”, Stephen is passionate about the art, getting to know Laois and encouraging an appreciation for the spoken word in people of all ages in the county and beyond.

“Ultimately spoken word it is sort of a hard sell but I find in general people actually engage with it. They might not seek it out but if it happens they engage and like it,” he said.
Stephen hopes to perform gigs in local pubs in the lead up to hopefully hosting a huge showcase at the Dunamaise Arts Centre of the best of Irish spoken word encompassing poetry and music.

“It demystifies it a little bit and takes away the stereotypes. The audience might not be there for me but I feel quite comfortable in that environment and if I could get them on board they might come along to the end event,” he said.

Spoken Word, a specialty that is developing as an art form and mode of communication, is a very popular outlet for self-expression.

Stephen will stimulate greater awareness of the art of the spoken word in Laois as well as encourage more opportunities for young people to engage with the work of established spoken word artists by working with young people throughout second level schools, Youthreach and youth theatre groups in Laois.

What does it mean for Laois people?

He hopes to get involved with local Men’s Sheds, walking groups, knitting groups and any other groups that would be interested in expression through poetry.

The IATD graduate has also requested to run workshops in Portlaoise prison.

It is his goal to leave behind a self-sustaining poetry group in Laois run by local members.

He has a great ambition for this group when it is formed to perform at Electric Picnic.

He is confident that these goals are achievable

A chance encounter with musician Glen Hansard in a hotel in Portlaoise launched Stephen’s career to new heights two years ago.

Since then he has travelled around the UK, Europe, Asia and this year went to L.A with Glen performing poetry live as a support act.

“It was just up the road here I was going to see Mick Flannery and Gary Dunne was supporting him, he is a friend of mine so I was coming to see Gary and Mick about two years ago, I think it was December. I went into the hotel next door to get a bite to eat and Glen Hansard was sitting there and he had retweeted the poem. I was passing by and said thanks to him but I wanted to leave him to his meal. I sat down for a bite to eat before the gig, he came over to me before he was heading off and he asked me what I do. He said would you come and do the poem with me in Vicar Street in a week or two so I said yeah and gave him my card. I didn’t hear anything from him, I thought that’s life but I woke up the next morning and I had an email at 5 or 6 in the morning he had found my card in his jacket pocket and he asked me to come along that night so I did. Thankfully it went well,” he explained.

What does this mean to him?

Stephen is enthusiatic, ambitious, passionate and driven when it comes to poetry and this residency has offered him stability.

“I have been a sole trader since January 2016 doing this, it is a tough old graft I guess but I like that I get to have conversations and two weeks ago I was sitting in Clondalkin with the women's knitting group and I was asked to write a poem for them.

“I get to see interesting things and I am not stuck in an office which I have done before and I can't cope with that but it is a handy getting this residency because it essentially means I can afford to feed myself next year,” he laughed.

Read more: New café announced for Portlaoise as another closes its doors.