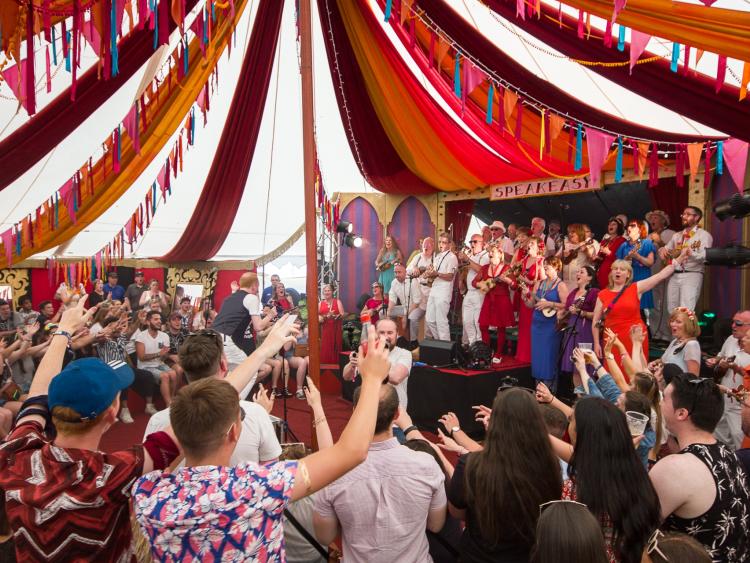 A Dublin based ukulele group that has played at Electric Picnic for the last three years in a row will take to another festival stage in Laois this month.

The Dublin Ukulele Collective is a unique band that has just been confirmed for the Old Fort Quarter Festival in Portlaoise.

Having played the Trailer Park stage at Electric Picnic for three years, the 25 strong group is no stranger to a Laois crowd.

Eoin Killeen is a member of the ukulele troop.

"The Old Fort Quarter Festival is the perfect stage for us, it is the right audience, family friendly and the festival is professionally run but not too serious.

"Festivals like this get us in shape for summer and when we have played in Laois and Offaly before, it is always a great crowd with great feedback and our social media is hopping after the gig.

"We are a fun group and we play all sorts of music from Leonard Cohen to rap music. We take our fun seriously, we play a lot of charity gigs and in the summer we like to say that we are getting festival ready," he said.

The diverse group was formed three years ago by Irene Hassett. Members vary in age from 18 to 90 with all different abilities and strengths. The group was formed from the big ukelele scene in Dublin all doing different charity gigs. Eileen Hassett decided to form a large group and it took shape from there," Eoin said.

The Dublin Ukulele Collective has raised money for the Jack and Jill Foundation, Alzheimer's, Barnardos and many more charities.

"We have played at Electric Picnic on the Trailer Park Stage for three years in a row now. We hope to be playing at the festival again this year, it is a real family area of the festival, it is the first thing people meet when they walk in and see the Trailer Park which is great.

"This will be our second year to play at Castlepalooza, we have played for Michael D Higgins and we are again this year, we played at Longitude last year," Eoin added.

The group hope to get confirmation to play at Electric Picnic this year but for now you can catch them at the Old Fort Quarter Festival in Portlaoise on Saturday, June 23 at 5pm on the Main Stage.