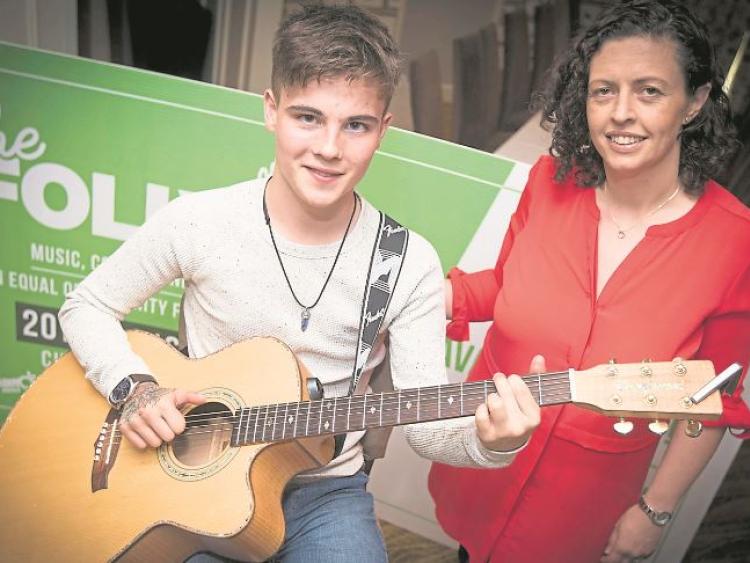 Singer Curtis Walsh with Marian Mahony, secretary of Cullohill Community Council at The Manor Hotel, Abbeyleix for the launch of The Folly. Picture: Alf Harvey.

Laois is already an established festival destination with Electric Picnic and the Scarecrow Festival being national favourites, and now an impressive new event aims to join them.

The Folly is a two day festival of music, comedy, culture and porridge in Cullahill village, featuring celebrities Marty Morrissey and Rachel Allen.

It boasts several firsts, with the first ever Irish Porridge Making Championships, and being the first gender balanced Irish festival, with equal numbers of male and female musicians and comedians.

The brand new event – The Folly, will take place over two nights in the shadows of the majestic old ruins of Cullahill Castle. Dating back to the 1420s, the regal tower will provide a stunning backdrop to the main stage, nestled at the foot of the historic relic.

Taking place over two nights July 20 and 21 this weekend, the line-up will feature an equal gender balance of female and male musicians, performers and comedians, featuring some of the best up and coming talent in the country.

On Friday night, Folly fans will be treated to music from the Nomadic harmony folk duo The Lost Brothers and the young fresh talent of singer songwriter Curtis Walsh representing the male talent. And on the ladies side will be Holly Macve renowned for her heavenly voice on her spellbinding country and western ballads and singer songwriter Molly Sterling with her emotive alt pop sound.

If it’s a belly laugh you want, The Folly is where you need to be on this magical weekend on Saturday night, as some of Ireland’s finest comedy prodigies and up and coming comedy gems take to the stage over the 2 day festival, including the hilarious Kevin McGahern, Ashlee Bentley, Mark McConnell, Niamh Marron, Eddie Mullarkey, Grace Mulvey, Ronan Grace and Sharon Mannion.

The next best thing about eating food is talking about it! There will be a veritable smorgasbord of food stalls on offer, alongside beverages of alcoholic and non-alcoholic tipples.

Before night time falls on Saturday and the Folly entertainment kicks off, there will be plenty of day time activity with the Cullahill Annual Fair for all ages, a walk up the Cullahill mountain, a farmer’s market, village parade, games for the kids, storytelling, a tour of the hidden history of Cullahill Castle and the first ever PaddyO’s Irish Porridge Making Championship, with Rachel Allen on hand to judge.

Before it even happens The Folly is already a triumph of a small community working together, with plans in place for it to be an annual festival, all to fund village regeneration.

Organised by Cullahill Community Council, it has the support of Electric Picnic, and funding from Laois Partnership Company and Laois County Council.

Cullahill Community Council chairman James Walsh hopes it can raise €30,000, to use as matching funding to get grants for community groups, clubs and projects.

They also hope it will pay to renovate the village hall, to make it cosy for winter meetings. The CCC is also forming a five year development plan for Cullahill.

PaddyO’s owner Paddy O’Connell is delighted that his cousin, chef Rachel Allen is involved. She will be one of three judges in the inaugural Irish Porridge Championships, organised by him as part of the Cullahill Fair. Two category winners will be flown by PaddyO’s to Scotland to compete in the World Championships.

“I represented Ireland last year in Scotland and I approached the organisers about holding an Irish championships. Cullahill Community Council supported my idea immediately, and Rachel wanted to be involved too. We have 17 competitors but we want more from Laois and the midlands. Our prize is the Emerald Sporkle, made by Laois furniture maker Alan Meredith. I’m delighted to have such local support, it’s great that everything goes to Cullahill as I’m a proud local,” he said.