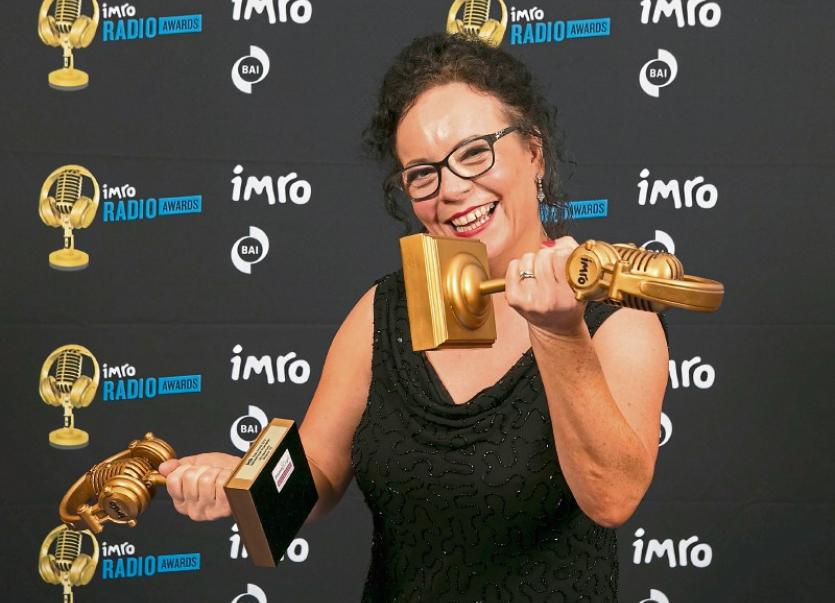 Around twenty years ago Ann Marie Kelly was at home in Abbeyleix reading the Leinster Express.

Something seemed to jump off the page. Midlands 103 Radio was inviting applications for a job.

Roll the clock forward to October 2018 and the same talented and hardworking Laois woman is winning national awards for her radio shows.

Ann Marie scooped two Golds at the national IMRORadio Awards for her work on Midlands. Her Monday night programme, The Open Door, was selected as the Best Magazine Show in Ireland beating off the likes of Ray D'Arcy of RTÉ and Sean Moncrieff of Newstalk in the process.

“You trojan away for 20 odd years and you sit and you watch other people getting lots of researchers and money. You probably do the same work as them and, all of a sudden, you are on the same stage. I am not one to blow my own trumpet but it is lovely to have it blown for me,” she told the Leinster Express.

Ann Marie worked for a decade in national radio at Today FM but decided to return home to her roots.

“I would have moved back to Laois for family reasons. It just goes to show you can work in a small station and still think big. I always tell my children to think big,” she says.

Returning to Midlands was not just a homecoming but also a journey back to her professional roots.

“I wanted to be a filmmaker or a keyboard player. My late, inspirational, mother Mary said, you are going to have to get yourself a job. There was a jobs ad in the Leinster Express saying Midlands 103 was looking for a researcher. I reluctantly went over in the car with my dad Tom to Tullamore. I was dreading it,” she said.

But as things happened she got the job and soon began to like the work.

“Then I got a chance to go on air because somebody got sick, and got the passion for it,” she said.

She'd found her career niche but got itchy feet and the kingdom called.

“Radio Kerry was looking for a regular presenter so I thought it was time to get out of the midlands for a while. I was in the kingdom for four years and loved living in Tralee. I adored Radio Kerry. I kind of learned my trade there,” she says.

But then, Dublin came knocking. She was recruited by Today FM where she spent ten years presenting the morning show. She began working on documentaries and found it was something she wanted to do more of.

They say every successful career comes with a price and involves a lot of hard work.

Ann Marie began her family in Dubin with husband and Portlaoise man, Stewart Quinn. They made the big move back home in a bid to achieve more of a work-life balance. It hasn't worked out quite as well as Ann Marie would have hoped. She presents a Monday to Friday morning show which requires she gets up at 4.30am to commute from Portlaoise to the Midlands studios in Tullamore. It is one of three shows she presents.

“I hoped to have more time with my children. Maybe the awards will show that is why I cannot bring them to school each morning.

“I make sure my weekends are completely free of work. Friday evening, Saturday and Sunday are kept completely free for my girls Grace (aged 10) and Molly (aged 4),” she says.

Many listeners probably think radio work is easy - sit behind a microphone, do a bit of talking and play a bit of music. The reality of getting up at 4.30am is far different. It is not glamorous or easy. Ann Marie says she is up with the bin men to get to work.

Ann Marie believes the job and sacrifice are worth it.

“It is hard and there are sacrifices. That is why I am so happy to win these awards. It takes me an hour to prepare and get my head together to push the mic up. At the same time I have a lot of listeners who are up early,” she said.

The award for her 'The Open Door' series was won for a programme made in Mountmellick along the River Owenass with the help of Ricky Whelan. In it, he recalls the past and ponders the future. She credits Ricky for having a big part in the win. In many ways, the programme reflects Ann Marie's view of the role of a local radio presenter.

“You connect with people more because you are on the ground with them. You hear more stories and people trust you more because they know you are not going back up to Dublin and will never see them again. That is what made me realise the importance of staying connected and not be aloof,” she said.

“Local radio is a friend to people. I can get phone calls from people at 6 am from somebody who is very alone and upset saying 'Ann Marie you have made my day'. I get those calls every day from men and women. That makes me feel it was worth my while getting up at 4.30am in the morning,” she says.

She believes this is the very personal aspect of local radio connecting with communities. She believes it is important to get out of the studio to gather stories from communities.

“I could be in Ballickmoyler tomorrow and could be in Ballacolla the next day. I was in Ballylinan last week for a youth cafe. That is what I love, going to places and getting stories,” she said.

Music is a big part of Ann Marie's professional and personal life. Through her morning show and especially her Friday night series, she aims to promote local talent.

She mentions a great gig by the Big Spoon in Portlaoise recently. She believes more publicity for such bands would mean bigger crowds at venues.

“To be honest I am always in a battle to get the smaller bands on air, especially Irish bands. That is why I created the Roadhouse Cafe programme where I can put those bands on the air.”

The show goes out on Friday night and involves bands and musicians doing sessions. While she champions singer-songwriters, she points to Chasing Abbey from Tullamore as a group who can make it big coming from a smaller market.

She finishes by crediting Midlands for providing the vehicle for her shows.