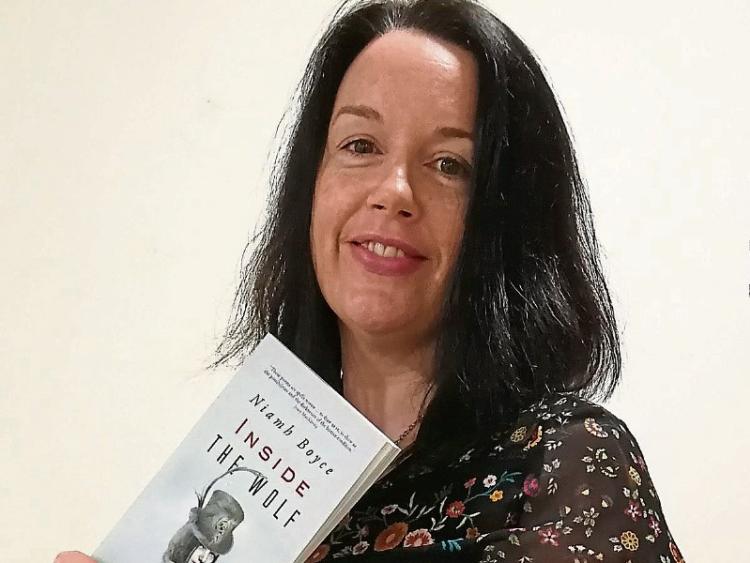 The compilation of poems dissects well known fairytales and myths reassembling them as dark and subversive fairytales with colour, menace and wit.

The poetry focuses on the transformation of strange creatures and the dangers of meeting these dark beings and entities which folklore describes and forewarns may await you when you enter into the scary dark woods.

Originally from Athy the writer who has lived in Ballylinan for over 12 years won the New Irish Writer of the Year Hennessy Award in 2012 for her debut novel titled The Herbalist.

Ms Boyce took a year-long career break from the library to focus on her next novel titled Her Kind which is due for release next spring.

The novelist is also focusing on teaching writing skills to beginners in creative writing workshops.

Qualified to teach yoga she intends to incorporate meditation into her writing workshops which she says creates relaxation and focus allowing people’s creativity to flow naturally eliminating the fear of beginning.

Speaking about self-publishing Ms Boyce said, “You have to give yourself deadlines and believe that you can finish what you’ve started whether its poetry, short stories or a novel.

“Many people think of publishing before finishing their work.

“I feel that it’s important to write the first draft to yourself for you in the early days. You can think about the reader later on as you progress.

“The novels that you see on the shelves in the bookshops are never first drafts. Some novels are the result of up to 30 drafts before they are completed and ready to be published.

“I have cut 14 characters that I wrote from Her Kind which is the result of intensive writing and draft after draft for almost four years. You have to cut, cut and then cut some more until you know you’re done.

“Self publishing gives you full creative control and much more choices as you are doing everything yourself.”

Her new novel Her Kind is a true story but fictionalised based on wealthy Kilkenny woman Alice Kyteler who was born into a noble family and became the first woman in Ireland to be accused of witchcraft in1324.

Alice’s stepchildren made the accusations of witchcraft to the bishop of Ossory Richard Ledrede who declared that his diocese was a hotbed for devil worshipers and ordered her to be burned at the stake.

Alice fled the country but her servant Petronilla de Meath was flogged and burned to death at the stake instead making her the first woman in Europe ever to be burned for witchcraft.

The story is told from the view point of the servant Ms de Meath.

Niamh Boyce’s Inside the Wolf and The Herbalist are available on Amazon and she is contactable through her blog https://niamhboyce.blogspot.com.