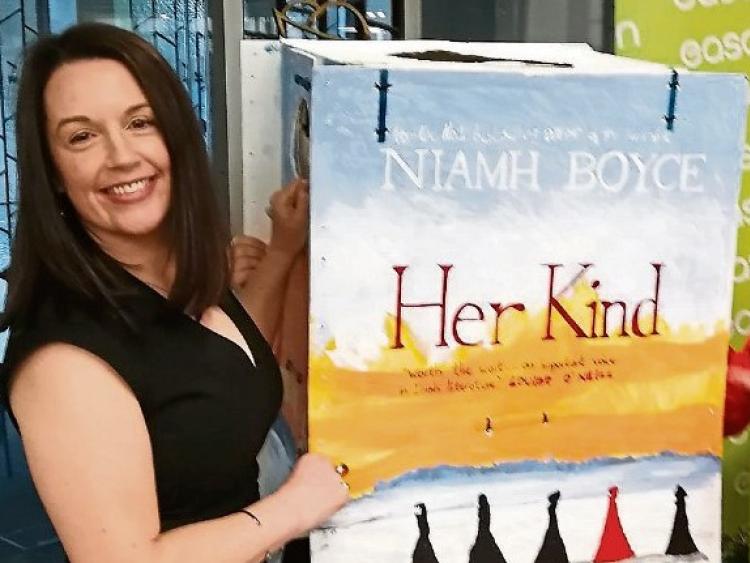 Just one day after the release of Laois-based author Niamh Boyce’s new and highly compelling book' Her Kind' came news that it has been shortlisted for the 2019 European Union prize for Literature which recognises the best emerging authors in Europe.

The launch of the red-hot novel took place on the author’s home ground of Athy in the town’s library where close to 300 people attended.

The writer has lived in Ballylinan for over 12 years and she won the New Irish Writer of the Year Hennessy XO Award in 2012 for her electrifying debut novel titled The Herbalist. She also self-published her debut poetry book Into the Wolf last year.

Her latest page-turner is based on the true story of extremely wealthy Kilkenny money-lender Alice Kytler who was born into a noble family and became the first woman in Ireland to ever be accused of witchcraft back in1324, almost 700 years ago.

Alice’s stepchildren made accusations of witchcraft and sorcery to the bishop of Ossary Richard Ledrede. Ledrede tried to instigate such revelations in others because of his blind jealousy towards Alice and her wealth.

Ms Boyce was introduced to the packed audience by her publisher and editor from Penguin Books Ireland, Patricia Deevey.

“The Alice Kytler story is a great and strong story and it contains several voices from the distant past. My father is from Kilkenny and I have had several submissions sent to me on this story over the years. I knew that nobody could delve into the Alice Kytler story and bring it to a brilliant life like Niamh could. Thank you Niamh for letting us publish you again.” she said.

“When I started looking into the case of Alice being accused of witchcraft I realised how her wealth caused so much strife. Even though a book like this takes a lot of research I had the first draft done in February 2014 and I thought I was working on a project that would take 12 more months but it took six years. My parents, Anne and Francis Boyce, minded my children every Friday night so that I could write more. This is why I dedicated Her Kind to them,” she said.

“We read that witch-trials began in the sixteenth century. It’s amazing to realise that the first woman to be accused of witchcraft in Europe was in Kilkenny almost 300 years before the sixteenth century. Back in medieval times accusations were enough. You didn’t need proof if you were ‘respectful’ your word would just be taken as truth against someone of lesser standing.”

She continued: “I was delighted to make a connection between the book and Athy. Bishop Ledrede wrote to the head of justice of Ireland officially accusing Alice Kytler and her so-called ‘sect’ of sorcery. I saw the letter as part of my research. It is dated 02/30/1324 and was written here in Athy.

Little did Bishop Ledrede know at the time that the head of justice in Ireland whom he penned his accusations to was related to Alice Kytler.

Whilst doing a reading from her book you could have heard a pin drop. After reading Niamh signed many copies of Her Kind for people as they queued for quite a while to chat with and congratulate the author.

Niamh wishes to thank everyone who attended her launch and hopes that people enjoy reading her book.

Her Kind is rapidly climbing in popularity looking likely to hit the bestseller list.

Also in attendance were novelists John MacKenna and Nuala O’Connor who both endorsed the book who Nimah says are “Hugely supportive of other writers.”

A night of celebrations followed the launch in Clancy’s Bar in Athy where entertainment was provided by the ukulele sensation 4 Strings and the Truth.

'Her Kind' is available in all good book stores and on Book Depository for those in America and on Amazon for those in the United Kingdom.