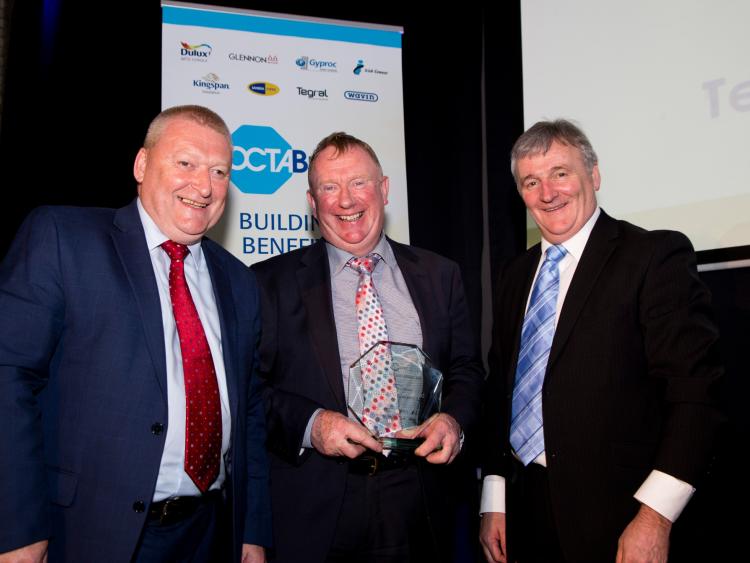 It was a double celebration for Telfords Portlaoise last week as it won the Leinster Large Business award in the Octabuild Builders Merchant Awards 2017, and its founder William Telford received a Lifetime Achievement Award at the same ceremony.

The awards were presented on Thursday May 11th in the Guinness Storehouse, Dublin and the event was attended by over 260 representatives of the building merchant trade in Ireland

The awards were based on numbers employed, large business over 25 and small business up to 25.

Telfords began in business 27 years ago and now employs 67 full and part-time staff.
Its philosophy is that the customer is the reason for its work, not an intrusion of it.

"Putting the customer first is an important way of putting our philosophy into practice. Product knowledge is of the utmost importance; we therefore focus on both training on a regular basis in-house and off-site with the help of our suppliers," said Manager Liam McEvoy.

"Telfords has an active marketing programme but believe our biggest asset is our staff.  A number of our staff have been withTelfords since we opened our store in Portlaoise in 1990."

William Telford, who is a well known businessman in the county, received his Lifetime Achievement Award for the contribution he has made to promoting quality service in the merchant trade and his support for Irish manufacturing.

This was the 20th Octabuild Builders Merchant Awards. The companies who organise the awards as Octabuild are; Gyproc, Glennon Brothers, Dulux Paints, Irish Cement, Kingspan Insulation, Sanbra Fyffe, Tegral and Wavin.
Between them the Octabuild companies have over 650 years’ manufacturing experience in Ireland, directly employ over 1,200 people here and have over 20,000 quality products available every day for Irish builders merchants.

The awards were judged by independent retail consultant James Burke and Michael Anglim, an experienced construction executive, who visited  almost 100 builders merchant throughout the country between late January and early April this year.