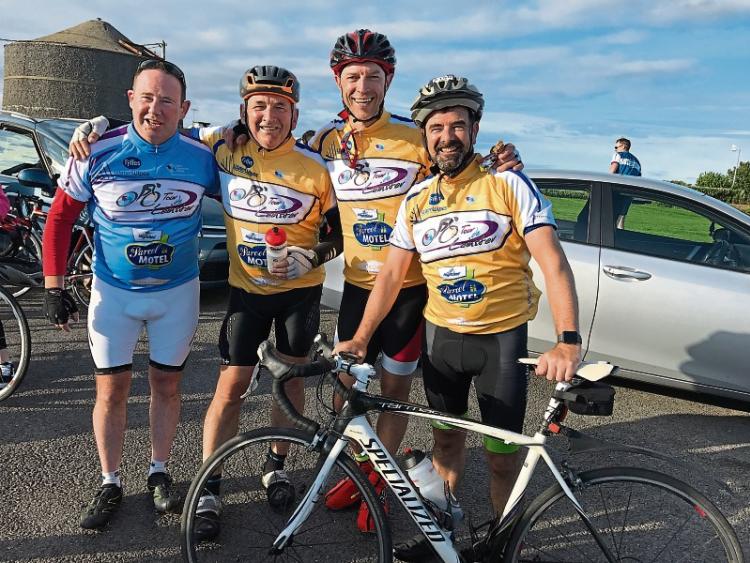 Local auctioneer, Clement Herron of Clement Herron Real Estate, based on Main Street in Portlaoise has taken part in a fundraising cycle for Down Syndrome Ireland.

The Tour de Leinster is 600km of cycling to challenge the best with breath-taking scenery, ascents, descents and the open road.

Cyclists were given the chance to share the road with one of Ireland’s most iconic cyclists, Tour de France and Giro D’italia winner, Stephen Roche.

Funds generated from the Tour de Leinster support not only high level national projects but also essential services delivered on the ground at local Leinster branch level. Children and adults with Down syndrome throughout Leinster benefit directly from this annual cycle.

The opening day of Tour de Leinster 2017 saw the participants depart Dublin City before a short stop in Blessington. From there the route crosses into County Wicklow through Valleymount before crossing the Wicklow Gap into Laragh.

Rolling countryside then afforded the cyclists some rest as they passed through the ‘Garden County’ of Ireland and then onward to Wexford for the first overnight.

The second day is where the real ‘fun’ began as the participants departed Wexford before taking on the legend that is Mount Leinster.

This famous ascent has featured in many epic races over the years so the team were truly following in the tyre tracks of history.

After a relatively easy opening stage to Portlaoise, the event turned northwards into the beautiful Slieve Bloom Mountains where the climbers got to stretch their legs once more, before descending to Tullamore.

Heading northwards once again, the route brought the pelotons on to Mullingar for the last overnight stop.

The opening part of day four allowed the participants an opportunity to shake off the lactic acid that had been built up over the previous three days before they take on the Hill of Tara.

The area is steeped in mythology and historical significance having once been the seat of the High Kings of Ireland.

Retracing the steps of Queen Maeve and her army, the route went on to Drogheda before turning south along the coastline overlooking the Irish Sea.

Stunningly scenic, the coastal stretch afforded everyone the chance to regain their strength (and hopefully top up their tans) before arriving in Dublin where the last hill awaited in Howth. Not the longest climb in the world but one that was a tough test after four days in the saddle and of course participants went the toughest way up it!

Clement aims to raise €3,000 and hopes to meet his target very soon.

This year’s Tour de Leinster saw over 40 participants cycle over 600km over 4 days. Along the route, our cyclists were greeted by our members with Down syndrome and their families.

Most were out at our food stops and it gave our cyclists a fantastic opportunity to chat to everyone.

The money raised from Tour de Leinster will help Down Syndrome Ireland National Office and the participating branches to continue with our core work.