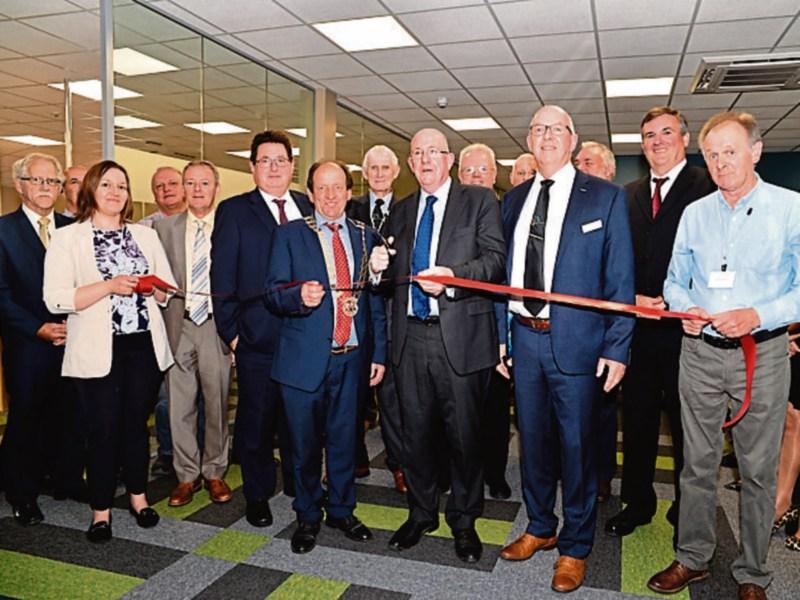 Some of Laois' 12,000 commuters can now take up desks to rent at a new business hub in Mountmellick.

Webmill has space for 45 workers and is aimed at filling a growing need for an alternative to the long daily commute to Dublin, in the form of shared offices with reliable fast internet.

Desks can be rented for one or more days at a time, so workers can take a break from commuting.

It is already proving popular too for self employed people who previously worked from home, with two such tenants already having moved in to Webmill.

Read more: Laois businesses move from the kitchen table to a hub

The centre has three stylish glass walled offices of varying sizes which can be cordoned off to make smaller spaces.

In a way the 5,500 sq foot facility was built out of thin air in the MDA building, a restored mill.

Webmill is on a first floor which literally did not exist until the MDA's commercial kitchens were built in recent years, which required a fireproof ceiling.

Spotting the new space's potential, MDA manager Paddy Buggy got approval from the board to begin work on creating Webmill.

The project got the backing of a Town & Village Renewal grant of €100,000 via Laois County Council.

The MDA also borrowed from the local bank and engaged local contractors Garoon Construction to do the job, with board member and retired council engineer Pat Fitzpatrick volunteering his design skills to save money.

Minister Flanagan grew up across the road from the Irishtown mill and recalled cycling to it on his tricycle. He said unemployment has dropped from 15.2% in 2011 to 5%, “effectively full employment”.

"It's moving now from job creation to quality of life. I welcome the representatives of the IDA and Enterprise Ireland here, we hope to see more of you. This expansion will ensure a better quality of life for Laois commuters and I assure you of support from the state for projects such as this," he said.

He made a surprise presentation to Pat Fitzpatrick, a Rosenallis man who has volunteered his time and expertise for 35 years (below). 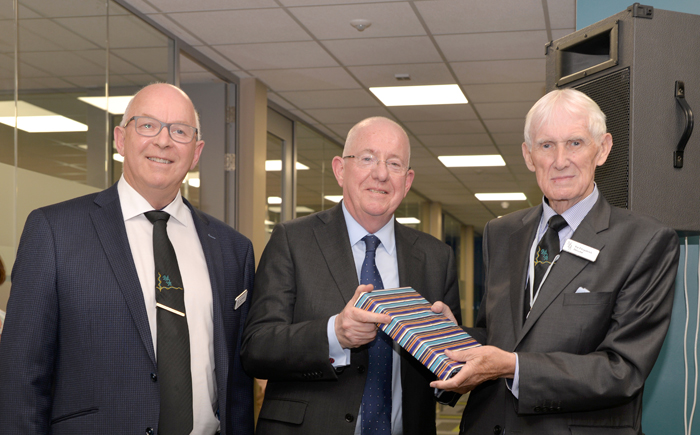 Paul Dempsey is the chairman of the MDA board.

“We believe we are providing a very unique people centred service here. I thank everyone involved with the development of this campus, and ultimately the town, long may it last,” he said.

“The Webmill has space for 45 staff which will bring direct employment on the campus to 160. We had those numbers in the 1990s and we hope to bring them back up, providing a better work life balance,” Mr Dempsey said.

Below: Mountmellick Development Association board members. 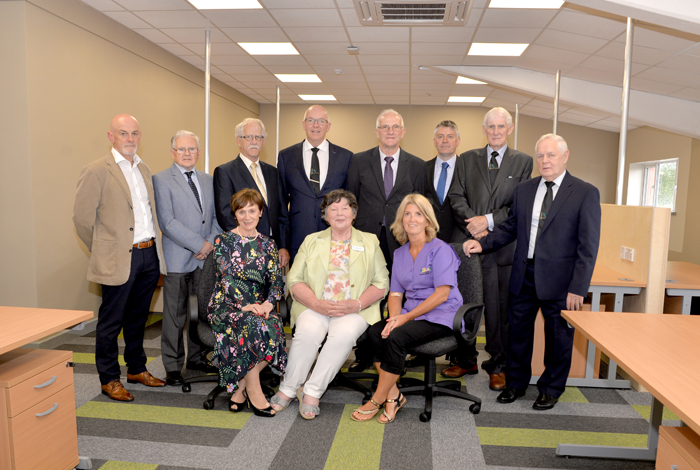 CEO of Laois County Council John Mulholland praised the unit at the launch.

“I visited this two years ago and it was covered in dust. Mountmellick was the Manchester of its time, and now we see a renaissance,” he said.

He noted that there are now co-working centres in Portlaoise, Portarlington and Mountrath.

“We have a network in Laois that compares equally if not better to other counties. Up to 130 individual spaces in communities like this. All are really required by commuters, and all are retrofitted into existing buildings. You have delivered this in a value for money way. I hope that quality will make it an easy selling point,” Mr Mulholland said.

“This is a very special day for Mountmellick. This whole building was driven by a group who put their time and heads on the line. President Robinson opened it in 1992 and look where you are now, all on a voluntary basis. I believe that hubs are the way forward. You're encouraging people to come home, you should be proud,” he said.

The launch was also attended by Laois Enterprise Office and Laois Chamber of Commerce. Webmill was blessed by Reverend Tim Irvine and Fr Micheál Murphy PP. 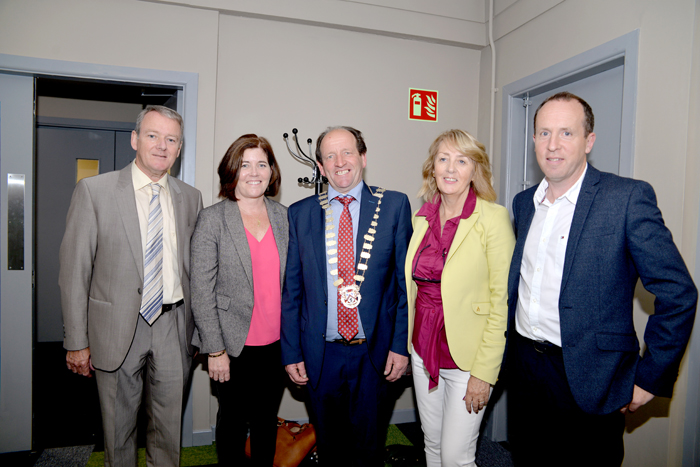 The man with a big role to play in making Webmill a reality in Mountmellick Development Association's campus is MDA manager Paddy Buggy.
Speaking at the opening, he explained that he knows well the pain of commuting to Dublin every day.
"As someone who once spent four hours a day commuting, I know how much it means to have more me time, and a work life balance,” he said.
He explained why there is a need for the centre in the town.
“Mountmellick has a high number of commuters. We have a proximity to Dublin, but it is too expensive to work in,” he said.
Mr Buggy hopes that Webmill can grow new business for the town.
“Webmill brings tomorrow's world to Mountmellick. We hope that the cross pollination will in turn bring new business to the town," he said.
He was praised as “a trendsetter” at the launch by Cathaoirleach Cllr Willie Aird, who said that his father had given Paddy Buggy that name many years ago.
“We're there with you every step of the way with help and support,” Cllr Aird said.
MDA board chairman Paul Dempsey also credited Paddy Buggy for driving the project.
“Paddy pushed us all to complete this project,” he said.
The MDA building is an old mill that was bought by the community run organisation in the 1980’s, using local fundraised money.
It now has a childcare centre, a family run restaurant, museum, meeting rooms used by local clubs, conference rooms and parking, now complimented by Webmill.
The site also has purpose built units occupied by the HSE and the Standex company.
Paddy Buggy has forged contacts with local landlords to ensure that overnight accommodation in Mountmellick can be arranged if needed by Webmill workers.
“We have collaborated with property owners for accommodation,” he said.
He is ready to get the word out to potential tenants.
“We are getting good feedback. The builders literally were working until the morning of the launch so we are ready to roll, the work really starts now,” he said.
Next up for the MDA is to launch its Beale Centre for Business Excellence, to be the focal point in Laois for stage agencies, businesses and third level institutions to work together to create Laois jobs.
A manager will shortly be recruited, co-funded by Enterprise Ireland.