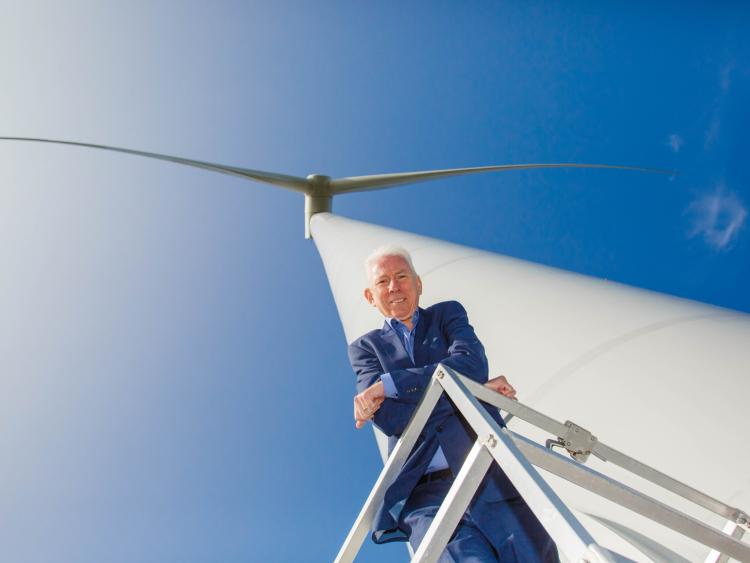 IN the week concerns were expressed about the likelihood of Bord na Mona workers being employed in a major house retrofitting programme, the company has announced that it will raise €1.6bn to fund a series of major climate action projects across its 200,000-acre landholding.

In Offaly, Bord na Móna already has an operational wind farm at Mount Lucas while another in the north-east of the county in Cloncreen is at the construction phase. A third is being planned for Derrinlough in the west of the county.

Bord na Mona said on Wednesday that it has appointed Goodbody Corporate Finance to manage the fundraising for a series of largescale climate action projects, including wind and solar energy infrastructure developments for delivery in this decade.

Announcing the fundraising and investment programme Bord na Móna chief executive, Tom Donnellan said: “Bord na Móna’s purpose is to help Ireland become carbon neutral by 2050 and we are committed to delivering this major pipeline of critical climate action projects. Bord na Móna has a national and business imperative to use our land and other assets to develop these projects. We have already discerned a strong appetite from investors for the major renewable projects that we are developing and are delighted that Goodbody is on board to help manage the funding.”

Bord na Móna has six major projects either in planning or in construction with as many more to follow before 2030.

In addition to the 21-turbine Cloncreen project, and the Derrinlough wind farm, where 21 are also proposed, Bord na Mona is building phase two of a wind farm in Oweninny in Mayo, has planning consent for a 70MW solar farm at Timahoe, Co Kildare, and has a planning application in process for a renewable gas facility at Cul na Mona, Laois.

The company said it is already generating 10% of Irish renewable electricity and is on track to achieve a 300%increase in its renewable energy output in this decade.

It said that by 2030 it will be generating enough renewable energy to supply nearly a third of all Irish homes and its renewable energy supply will significantly help Ireland deliver on its carbon reduction and green energy targets.

The funding and investment announcement follows the company’s recent success in the first competitive auction under the Government’s new Renewable Electricity Support Scheme (RESS-1) where the Cloncreen and Oweninny wind energy projects were successful in their bids.

In 2018 the company adopted its 'Brown to Green' strategy with the stated ambition of taking a leading role in delivering key aspects of national climate action policy.

Under this strategy the company accelerated its development pipeline of renewable energy and recycling infrastructure.

Bord na Mona has also launched one of the largest peatland restoration and management programmes in Europe, saying this programme will significantly boost biodiversity and is aimed at securing and capturing more carbon in its lands.

Commenting on being appointed Bord Na Mona’s financial adviser, Finbarr Griffin, head of Goodbody corporate finance said: “Goodbody is delighted to be working with Bord Na Móna on this large strategic fundraising. Goodbody has been involved in the funding of renewable energy and infrastructure for over 15 years and we see Bord Na Móna as a key strategic player in Ireland’s drive for carbon neutrality.

Last week the European Commission proposed cutting 55% of Europe’s emissions by 2030, up from its previous goal of 40%, and said it would use hundreds of billions of euros worth of green bonds to help fund the target. The European Commission funding plan will make €225bn available for climate action projects across the Union.

With hundreds of Bord na Mona workers facing redundancy as the company exits from peat in line with its 'Brown to Green' strategy, some staff were retrained in retrofitting with a view to attaining work in the €20m social housing energy efficiency drive.

The company has said there will be opportunities for the former peat harvesting employees to transfer to roles in the bog restoration and management programme.