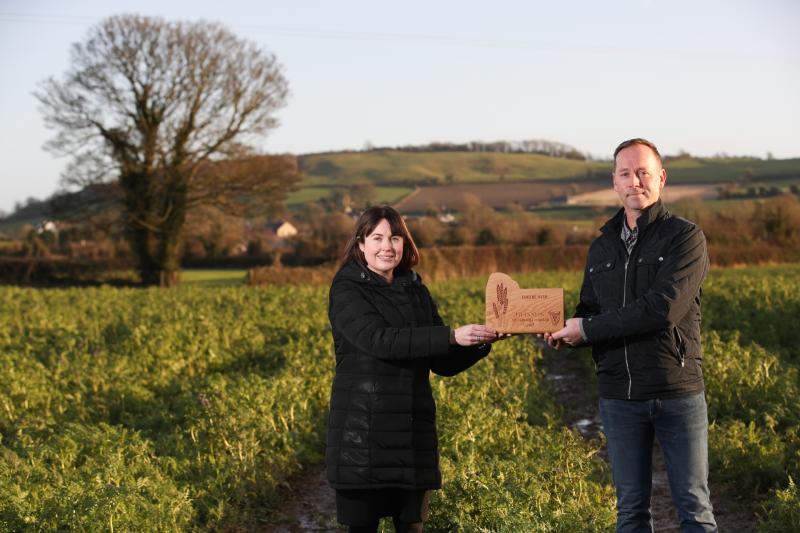 Eugene Ryan from Ballycarroll, Portlaoise has been announced as the winner of the inaugural Guinness Sustainability Award at the 2021 Irish Malting Barley Awards.

The annual awards, which have been run since 1954, acknowledge excellence in malting barley production as well as promoting sustainability in the supply chain.

Organised by Boortmalt, one of the largest producers of malted barley in the world, the awards are hosted by Diageo Ireland, the largest user of malting barley in Ireland. Working in partnership to tackle climate change, biodiversity loss, and helping to create a more sustainable world, Diageo is committed to preserving the natural resources on which we all depend.

Eugene commented on the satisfaction on winning and what he has learned along the way.

“I am absolutely delighted to receive this accolade for such an important subject. Along with my family on the farm, we have been very conscious of the need to do all we can to implement sustainable agricultural practices. With each passing year, we learn something new, and I know that we will continue to adopt even more sustainable farming practices in the near future to ensure that we are playing our part in protecting the planet to the best of our ability,” he said.

Martina Henry, Global Head of Regenerative Agriculture, Diageo said: “Sourcing both the right quality of grain, and grain that is produced in harmony with nature, is critical. The Irish Malting Barley Awards acknowledge excellence in our supply chain, and Eugene Ryan was chosen unanimously by the three independent judges as the stand-out winner of the Guinness Sustainability Award. We were impressed by Eugene’s thorough and thoughtful submission. It demonstrated a holistic farm management approach and a mature awareness of the complementarity and delicate balance of farm economics, community and environment. Eugene also demonstrated a clear dedication to pursuing activities that support the optimisation, rather than competition, of these interests.

"We were extremely impressed with the high quality of efforts and advancements being made by barley farmers overall and there were several other highly commended entries to whom we offer thanks and congratulations on their commitment and hard work. Collectively, we are greatly encouraged for the future of barley farming in Ireland”, continued Ms Henry.

The winner of the overall prize for excellence in malting barley production, and with it the Guinness Perpetual Cup, were John and Thomas Finn from Athy in County Kildare. The Finns were recognised by the judges for delivering consistently high quality barley.

More than 130,000 tonnes of barley are grown by passionate farmers for use at St. James’s Gate each year, or 40,000 acres, which is the equivalent of 12,500 Croke park pitches. 100% of Irish barley used in the production of Guinness is sustainably sourced.  The Malting Barley Excellence Awards bring together and recognise, the best growers from the main barley supply regions of Ireland and the best seed producers.

As part of its 10-year sustainability action plan, Spirit of Progress, Diageo says it is committed to working towards a low-carbon future, harnessing 100% renewable energy to achieve net zero carbon emissions across our direct operations, working with suppliers to reduce indirect carbon emissions by 50% and ensuring that every drink it produces will take 30% less water to make by 2030. For further information on our 2030 Spirit of Progress action plan, visit www.diageo.com

Boortmalt is the malting barley division of the Axereal group, Europe’s largest grain cooperative. Its plant in Athy is the largest producer of malting barley in Ireland.

Diageo Ireland is the largest purchaser of Irish grain of any brewer or distiller. In an average year, the company purchases in excess of 130,000 tonnes of Irish barley.