Laois has the lowest incidence rate of Covid-19 of the counties it borders and is three times less than Dublin over the latest 14 day official measure of the coronavirus pandemic in Ireland.

The Health Protection Surveillance Centre (HPSC) disease outbreak report reveals the numbers of confirmed COVID-19 cases by county in Ireland from August 26 to midnight September 8. It also sets out the key figures of incidence for 100,000 of the population.

After a turbulent August which led to new restrictions in Laois, there were 20 new cases identified in Laois over the last week of August and the first week of September. This is an incidence of 23.6 per 100,000 of the population. HSPC figures up to September 7 also reveal that there have bee 396 confirmed cases in Laois since February. This represents 1.32 of the 30,080 confirmed cases nationally.

The incidence in Laois is also below the 38 per 100,000 national average. A total of 1,810 new cases were identified nationaly by health authorities nationally over the two weeks.

The latest Laois experience contrasts with Offaly where 36 cases were confirmed over the latest two week period giving an incidence of 46.2 per 100,000. It has had 650 cases since February or more than 2% of the national total.

In Kildare, there were 137 new cases which gives an incidence of 61.6 per 100,000. Kildare has the third highest incidence behind Dublin and Limerick in that past two weeks. It has had 2,347 cases since February which is second behind the 14,048 recorded in Dublin.

Meanwhile, Kilkenny also had a higher incidence than Laois. There were 28 cases in the two week period where the incidence per 100,000 was 28.2.

With 913 confirmed new infections in Dublin, the capital is worst impacted and now has an incidence rate of 67.8 per 100,000.

Sligo is least impacted. It had less than five new infections and has an incidence rate of 4.6 per 100,000.

National HSPC figures in charts below. 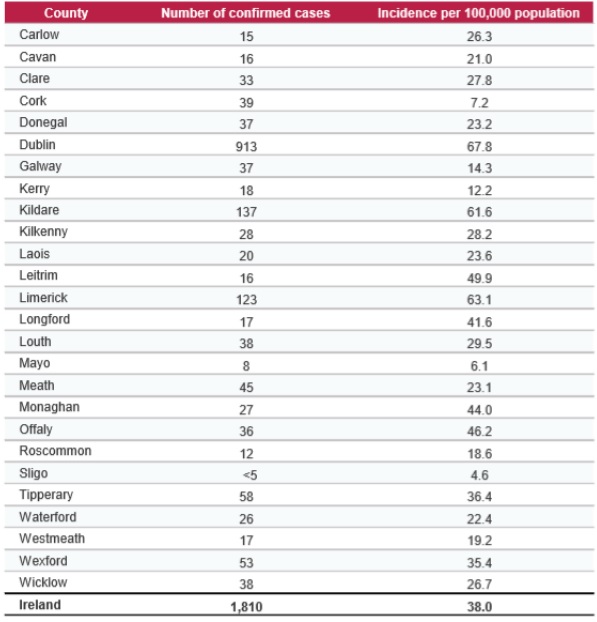 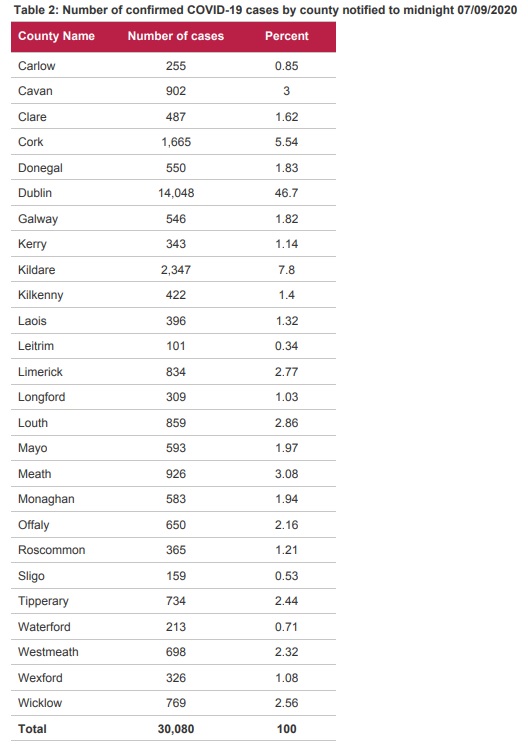