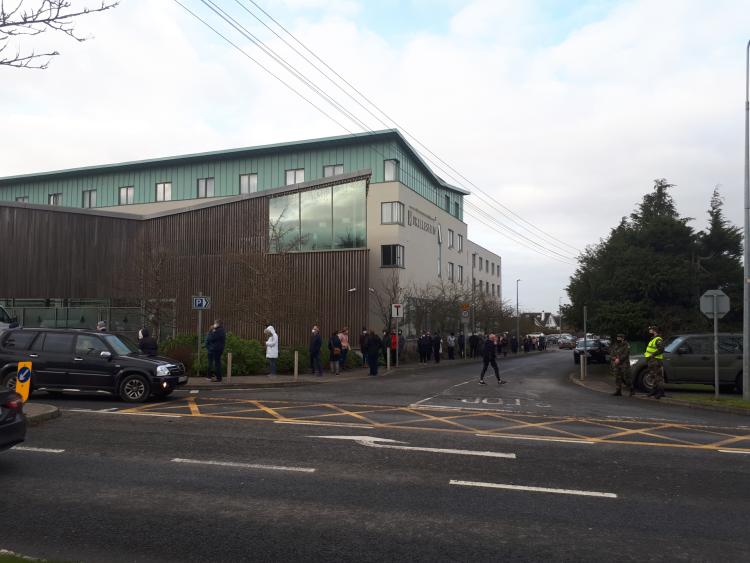 Queue at a vaccination clinic in Portlaoise on January 16

GPs and practice nurses as well as others on the Covid-19 frontline will descend on Portlaoise this weekend and into the coming weeks where they will receive their second vaccine dose to immunise them against the virus.

Doctors and their staff who received their first vaccine at a January mass vaccination clinic in Laois and will return again this weekend, February 13-14.

Doctors travelled from many parts of Ireland, including from around Laois, to the first clinic operated by the National Ambulance Service at the Killeshin Hotel where they received the Moderna vaccine.

It is expected that others working on the frontline will also get the jab at the clinic which is set to be used on a continual basis through the vaccination programme.

A long queue formed at the first clinic in Portlaoise on January 16 when a reported 500 doses of the Moderna vaccine were administered to the family doctors and their teams.

Laois Offaly TD and Minister of State Seán Fleming confirmed that it would be a community vaccination hub for the general population once all those essential workers and vulnerable people get the jab.

"In the first instance, this centre will be used to vaccinate medical staff including doctors, nurses and others who have not been vaccinated to date.

"The centre will be used to vaccinate large numbers of people under 70 years of age.  This will be a major process and there is ample space in the hotel to facilitate this.

"Those over 70 years of age are being contacted and will be vaccinated by their local GPs.  It is good to have a central location in Portlaoise which will be accessible for people in Co. Laois.

"Finally, I want to assure people that nobody will be left behind in the vaccination programme," he said.