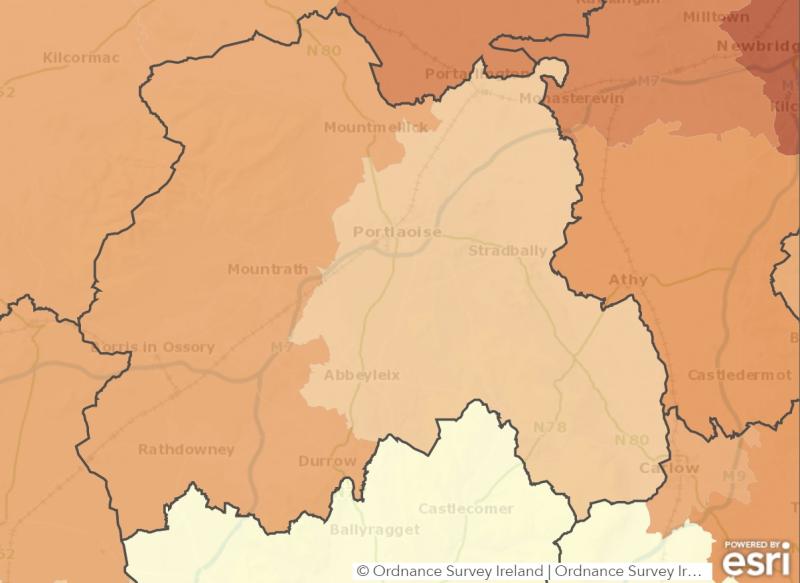 The impressive containment of Covid-19 in Laois has continued in each local electoral area of the county with just one case a day being recorded on average in Portlaoise while the incidence has halved in the area which has a big border with Kildare and Offaly counties that have struggled to contain the disease.

The Portlaoise electoral area has the lowest incidence of Covid-19 in Laois and the lowest number of new cases, according to the latest official figures continuing the trend of recent weeks.

Things have improved dramatically in Graiguecullen Portarlington district on the eastern half while progress has also been made in the Borris-in-Ossory Mountmellick district in the west.

The latest Local Electoral Area (LEA) breakdown published on April 29 on the Covid-19 Ireland data hub covers the 14 days from April 20 to May 3.

The new cases mean the latest incidence has fallen significantly to 44 per 100,000 population down from 69.2 previously.

The Portlaoise incidence is now well below the national 14-day incidence level recorded to May 3 of 134.1 per 100k. The national rate increased in the most recent analysis.

The latest figures from the Portarlington Graiguecullen show a significant improvement. The incidence is down while the daily number of new cases is almost the same as Portlaoise. There were just 16 new cases in the two weeks to May 3 down from 28 in the previous recording period. This means the incidence almost halved to 56.9 per 100 k from 99.7 per 100 k.

The latest figures from the Mountmellick to Borris-in-Ossory LEA also show an improvement. A total of 17 people tested positive down from 28 up to April 26. The latest incidence has fallen to 68.5 per 100 k from 112.9 per 100 k.

Health Protection Surveillance Centre figures for all of Laois in the 14 days to May 3 show that there were 46 new Laois cases compared to 79 new cases in the 14 days to April 26. The countywide incidence is 54.3 per 100 k down from 93.3. The daily average for new cases halved to two new cases a day.

The latest published figures for Laois were published by NPHET up to midnight May 5 show little change. The incidence has fallen to 53.1 per 100 k due to 45 new cases in the previous two weeks. The five-day moving average is three new detections a day.