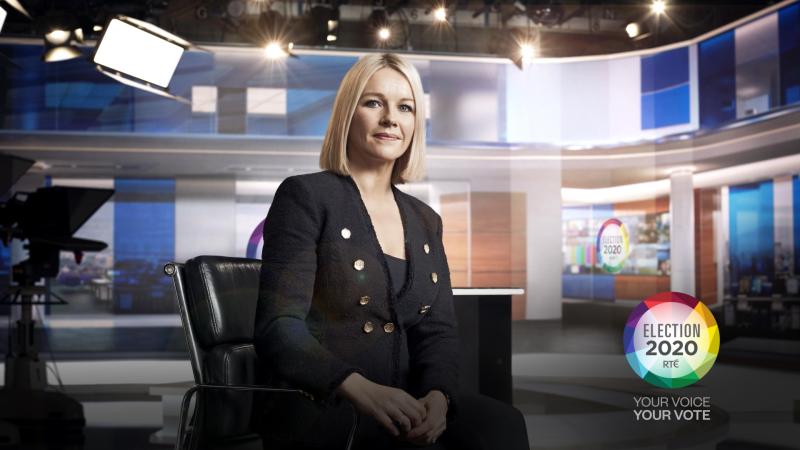 Laois woman Claire Byrne is set to be one of the broadcasters at the forefront of RTÉ's General Election coverage on radio and television as the results roll in.

The Mountrath journalist will front programmes on radio and TV on Sunday and Monday when she will also host a special edition of the Claire Byrne Live show as the public have their say and the results of Election 2020 are revealed.

Apart from regular lunchtime radio news slots including a trip to a mart in Sligo, the Laois woman has hosted debates on the health service and climate change on her TV show. Her most viewed election edition of Claire Byrne Live was in Galway where she hosted a debate of seven party leaders.

RTÉ will begin election results coverage on Saturday night, 8th February with the results of an exit poll carried out for RTÉ, The Irish Times and TG4 and will follow through the coming days with RTE.ie leading the coverage 24 hours a day.

The Ipsos / MRBI Exit Poll, commissioned by RTÉ / The Irish Times / TG4 / University College Dublin, and published simultaneously by RTÉ and The Irish Times at 10pm, is set to be the earliest reflection of voting patterns on Saturday night. Ipsos MRBI will interview approximately 5,000 people across Ireland immediately after they have voted on Saturday.

Across RTÉ, the findings will be revealed from 10pm; on RTÉ One with Election 2020 special with David McCullagh, Eileen Dunne and Bryan Dobson, on a special RTÉ Radio 1 Late Debate with Katie Hannon and on RTE.ie and RTE News Now app.

From Sunday with RTÉ Radio 1 bringing in-depth coverage of the Exit Poll as Gavin Jennings and Justin McCarthy present a special Morning Ireland Election 2020 programme from 8am to 10am. RTÉ Radio 1's Election 2020 - The Count coverage will continue on-air throughout the day and through the night with reporters in every one of the count centres following all 39 constituencies.

Rachael English, Sean O'Rourke, Claire Byrne, Aine Lawlor, Mary Wilson and Katie Hannon will present all the latest results, news, interviews and analysis from the RTÉ Election Centre in radio while Cormac Ó hEadhra will be broadcasting live from the R.D.S in Dublin, the largest count centre in Ireland.

RTÉ One television’s coverage on  Sunday 9th February begins with a simulcast of Morning Ireland from 8am, At 9am Election 2020 will run continuously until 3am on Monday morning with live coverage of tallies, individual counts and results from all constituencies.

Bryan Dobson, Miriam O’Callaghan, David McCullagh and Claire Byrne will host studio analysis and discussion, with the latest breaking reports from count centres across the country. RTÉ One's Election 2020 results coverage will also include three half hour news bulletins with the One O'Clock, Six One and Nine O'Clock News on Sunday bringing viewers a round up of the day's election news and the other key stories of the day.

From 10pm on Saturday night, RTÉ News Online will deliver comprehensive coverage of the Exit Poll with analysis from RTÉ's Political Staff live on Facebook and Twitter minutes after the polls close.

Throughout the count, RTÉ News online and app will feature all the big moments and the local news with 39 live blogs giving the latest from each and every constituency, live results detailing constituency breakdowns on an interactive map, the big stories, trends and reaction.

RTÉ Raidió na Gaeltachta’s election count coverage begins on Sunday at 9am with the programme Lá an Chomhairimh, which will run throughout the day until late into the night, presented by Gormfhlaith Ní Thuairisg and Máirín Ní Ghadhra.

RTÉ’s election results coverage on Monday 10th February will begin with a special extended Morning Ireland broadcast with Audrey Carville and Justin McCarthy from 7am - 10am on RTÉ Radio 1 and RTÉ One from 8am. This will be followed by Election 2020 - The Results from 10am - 1.45pm with Sean O'Rourke and Rachael English featuring in-depth analysis of the results and key interviews with political leaders.

Mary Wilson and Philip Boucher Hayes will continue to present all the latest election news from 4pm -7pm while Sarah McInerney will present a special Late Debate programme from 10pm with election discussion and analysis as the final seats in the 33rd Dáil are filled.

RTÉ One will begin coverage with Morning Ireland simulcast from 8am followed by Election 2020 programming at 10am as Bryan Dobson, Miriam O’Callaghan and David McCullagh present updates on the latest counts and analysis on of the national picture and political reaction until 4.40pm.

Claire Byrne will present a special Claire Byrne Live Election 2020 programme at 9.35pm on RTÉ One with an overview of the impact and results.

Live coverage on the RTÉ News Now channel (available on Saorview, UPC, Sky, Eir, RTÉ News Now App and RTÉ Player) will have a rolling results service, and all breaking news developments as well as carrying live coverage of the key RTÉ Election 2020 programmes on both television and radio election results programmes.