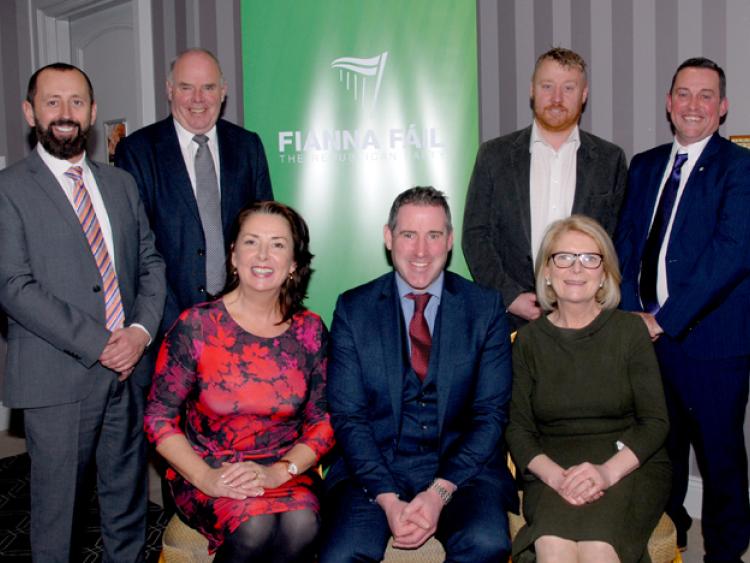 Dom Dunne, pictured second from right in the back row at the Fianna Fáil local election seleciton convention for Portlaoise.

'Skullduggery' 'bad treatment' and 'confidence and supply' fatigue has led to a grassroots Fianna Fáil man to compete with the party in Portlaoise at the local elections.

Dom Dunne is set to launch his local election campaign to contest for one of the seven Portlaoise Municipal District seats on Laois County Council.

Mr Dunne has accepted an invitation from Renua leader John Leahy to be its candidate in the biggest Laois County Council electoral district. He had unsuccessfully contested the Fianna Fáil selection convention.

Mr Dunne, who is a member of the Portlaoise Hospital Action Committee, blamed Fianna Fáil's support for the Fine Gael-led Government.

"I don't agree with this confidence and supply," he said.

Mr Dunne does not believe Brexit is a big enough issue for Fianna Fáil to maintain the confidence and supply arrangement.

"I know Brexit is important but when I go to the doors it is local issues that people are talking about," he said.

The local businessman also believes he suffered during the selection of candidates.

"There was a bit of skullduggery that went on. I can't say what it was...I was let down by Fianna Fáil there is no point in saying otherwise. I was let down. John Leahy rang me to ask me to run. I met him, spoke to my family and was happy to go on the ticket with him," he said.

Mr Dunne was an active member of Fianna Fáil for a number of years in Laois until his recent departure.

Fianna Fáil holds three seats in the Portlaoise District. Cllr John Joe Fennelly, Cllr Catherine Fitzgerald, Cllr Pauline Madigan have been selected alongside Donal Kelly. Cllr Madigan was co-opted onto the council in 2018 following the death of Cllr Jerry Lodge who was a councillor for more than 50 years.

Cllr Fennelly came second in the 2014 poll but the party's other candidates were the final two councillors returned.

Mr Dunne will be launching his campaign in the Portlaoise Parish Centre at 7.30 pm on Thursday, February 28 where he says he will outline "his political vision and passion for the area".