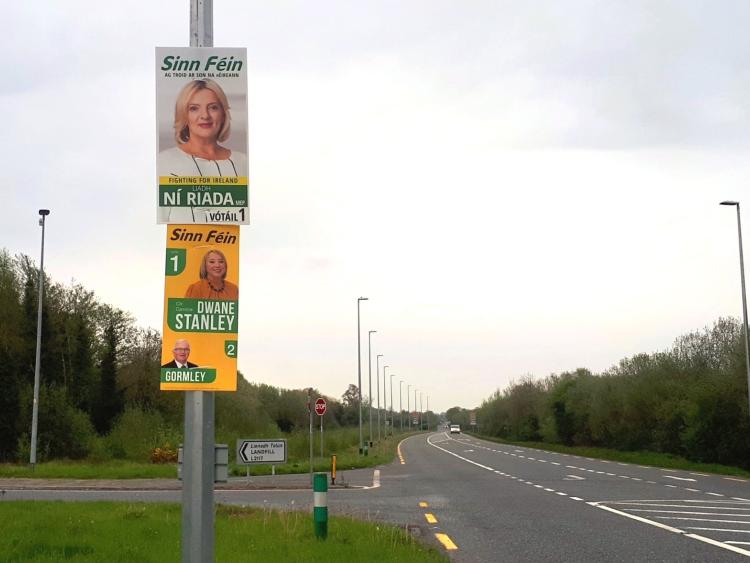 European and local election posters at the Kyletalisha landfill near Portlaoise.

Election posters have begun to appear in Laois, but candidates are expected to largely avoid towns and villages where the Tidy Towns groups have unofficially banned them.

The election posters can legally go up from April 24, a month before the election, until seven days afterwards.

A national campaign called Posterfree.ie has listed 12 towns in Laois that have requested no posters. They are Abbeyleix, Ballacolla, Ballinakill, Ballyroan, Castletown, Clonaslee, Durrow, Killasmeestia, Mountmellick, Mountrath, Portarlington and Portlaoise.

The informal ban still leaves rural Laois open to a proliferation of election posters, but there will be fines if laws are broken.

Read also: Laois could be 'fleeced' with election posters

It is a criminal offence to interfere or remove a poster, but posters blocking paths, driving signs or drivers line of sight can be removed by a local authority.

The ESB and the Road Safety Authority have told political parties not to put posters on ESB poles or road signs.

The ESB has said it will remove posters from ESB poles, and charge a fee per poster. The company warns that electricity can jump gaps. Posters can cause an electricity fault and catch fire, which has happened in the past the company said.

Removing the posters may involve cutting off the electricity to make it safe for ESB crews to remove posters they say.

Posters at junctions can create a blind spot for drivers, and cause danger for pedestrians, the RSA say.

Polling day is on May 24, when voters will be asked to vote in local elections, vote in the European Elections, and vote to reduce the waiting period for divorce.