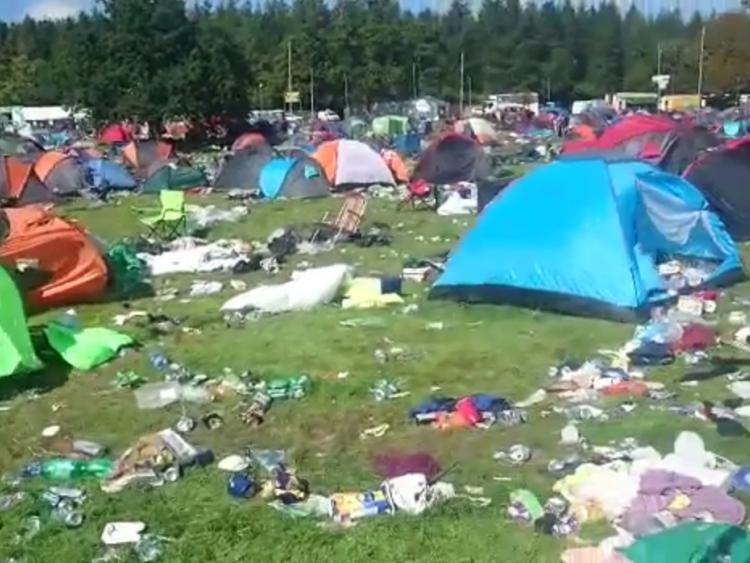 The Electric Picnic 2016 campsite, taken by charity Jacket Off Your Back. Campers are being urged to donate items and clean up.

Electric Picnic campers are packing up and heading home this morning, and are being asked by organisers and charities not to leave their mess behind them.

Campers at Electric Picnic are filing out in the misty rain this morning, surely with thoughts of a hot shower and warm bed on their tired hungover minds.

However organisers Festival Republic and charities Friends of the Earth, PATH Portlaoise Action to Homelessness, and Jacket Off Your Back, are all urging them not to leave tents and equipment, broken or not, behind in the campsites.

"If you have any broken tents, chairs, gazebos, empty batteries, unopened tins of food, take them to the Recycling Points," the organisers have requested.

Thirty percent of waste at festivals is made up of leftover tents they say.

"Don't join the stats. Do the right thing and take your tent home after the festival.

The Jacket Off Your Back is a Carlow charity who last year made a film of the mess left behind which went viral.

They are urging campers to donate undamaged items to Portlaoise homeless charity PATH.

"This year please don't abandon your tent and sleeping bag. This tent could be a home for a homeless person or refugee, and your sleeping bag could save a life," says

Used sleeping bags and tents can be donated at Exit 7, to PATH volunteer Tom Duffy, for the homeless.

Friends of the Earth were at Electric Picnic for the third year in a row with 150 Green Messengers to divert as much waste as possible from landfill into recycling and composting. Their efforts included running a popular Deposit Return scheme with Festival Republic

"We had such a wonderful response to our initiatives. It already looks like we’ll exceed last year’s record of keeping 150,000 cups out of landfill by the end of the festival and it was great to see so many adults and kids being financially rewarded for doing the right thing at our Cup-Deposit refund stations. However, after witnessing the sad state of the concert site following last year's Picnic, we must appeal to festival-goers to follow up all their good work of the last few days by taking home their camping gear and being responsible about their waste before they hit the road.” said Cara Augustenborg.

The 51,000 people who attend Electric Picnic generate at least 400 tonnes of waste.

"That’s over 8 kg of waste per person in just three days, excluding all the tents and clothing left behind. Last year's Electric Picnic revellers left behind a graveyard of discarded canvas, broken poles, abandoned chairs, stools, sleeping bags, food, clothes and soggy litter. In 2016, many festival-goers were under the false impression that left-over tents and sleeping bags would all be donated to charity, but the potential reach of a few small initiatives were over-estimated and more trash than ever was left behind. This year, there are 8 charitable organisations made up of approximately 100 volunteers attending to salvage as much reusable equipment as possible this year, but they can collect very little so most waste is likely to be incinerated or end up in a landfill," said Friends of the Earth.