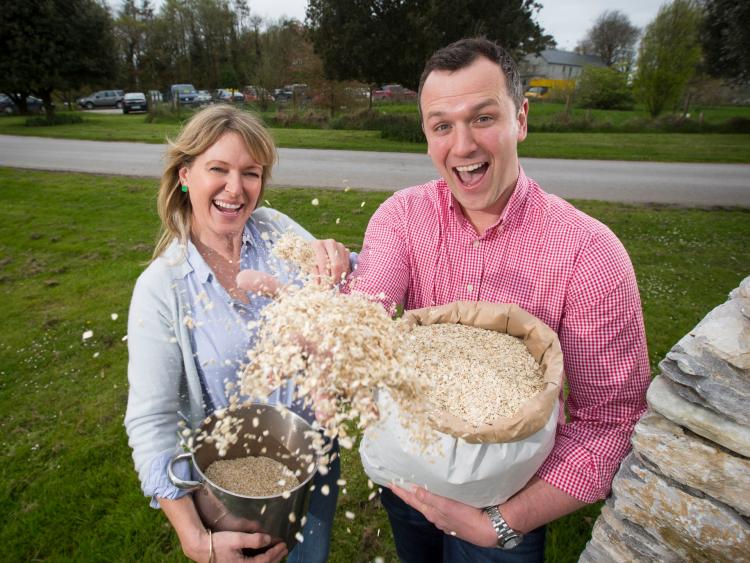 A brilliant new summer fair for families and those passionate about porridge is on the cards for a Laois village this July.

If you’re passionate about all things oats and think you’re a porridge connoisseur, this new competition to find the country’s best porridge maker could be right up your street.

Run in conjunction with PaddyO’s Cereals, the first ever Irish Porridge Making Championships will take place at Cullahill Fair, Co. Laois this July. 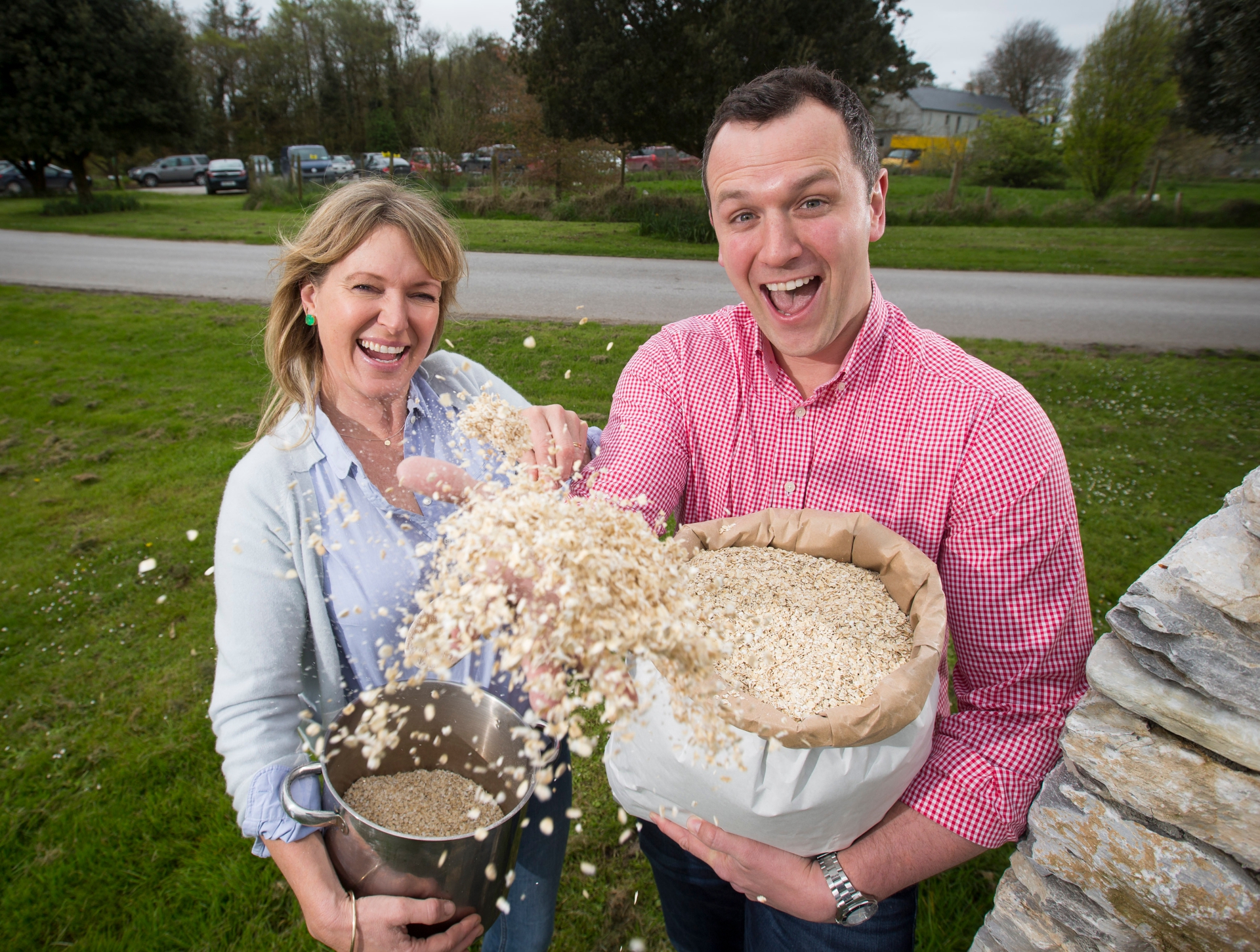 Organisers are looking for competitors from across Ireland to pit their porridge making skills against one another to compete for the title of ‘Irish Porridge Making Champion’.

The competition will be held across two categories and the winners of each will go on to represent Ireland at the Annual Golden Spurtle World Porridge Making Championships in Scotland on 6th October 2018.

The winner of the traditional category in Ireland will be presented with The Emerald Spurtle, carved from Laois bog wood by local woodturner, Alan Meredith.

The traditional recipe can be made with only three ingredients; oats, salt and water and if you’re not satisfied with using just those ingredients, you can compete in the speciality section which celebrates the versatility of porridge.

Speciality recipes can be anything from desserts to risotto – the opportunities are endless.

“We’re delighted to be working with the Cullahill Fair to host the first ever PaddyO's Irish Porridge Making Championships this summer.

"I competed in the World Porridge Making Championships last year and it was great fun but unfortunately, my porridge making skills didn’t set the world on fire!

"However, I was really inspired by the international event, so that’s why I’ve decided to try and help find a worthy representative from Ireland to head to Scotland this year.

"Last year I went to Scotland and when I walked in to the village where it was on, it was nearly identical to Cullahill.

"The whole idea is to get people to come to Cullahill, using Airbnb’s contribute to the local economy, it is going to be the new Electric Picnic. It is really exciting, there is huge enthusiasm in Cullahill.

"It wouldn’t happen without Cullahill Community Council, it is a very community based exercise. I grew up in Cullahill and I know how good the community is to rally around something like this. We are proud of the area and want to show it off and highlight it.

"It is a national event, it is like the All-Ireland of porridge making. Porridge is my livelihood and that is how I got into it so in the application we want to hear from people who love oats and are passionate about food.

"I’d encourage anyone who is passionate about porridge or loves getting creative with recipes to get involved by submitting an entry now! You could be the first ever Irish Porridge Making champ!” he said. 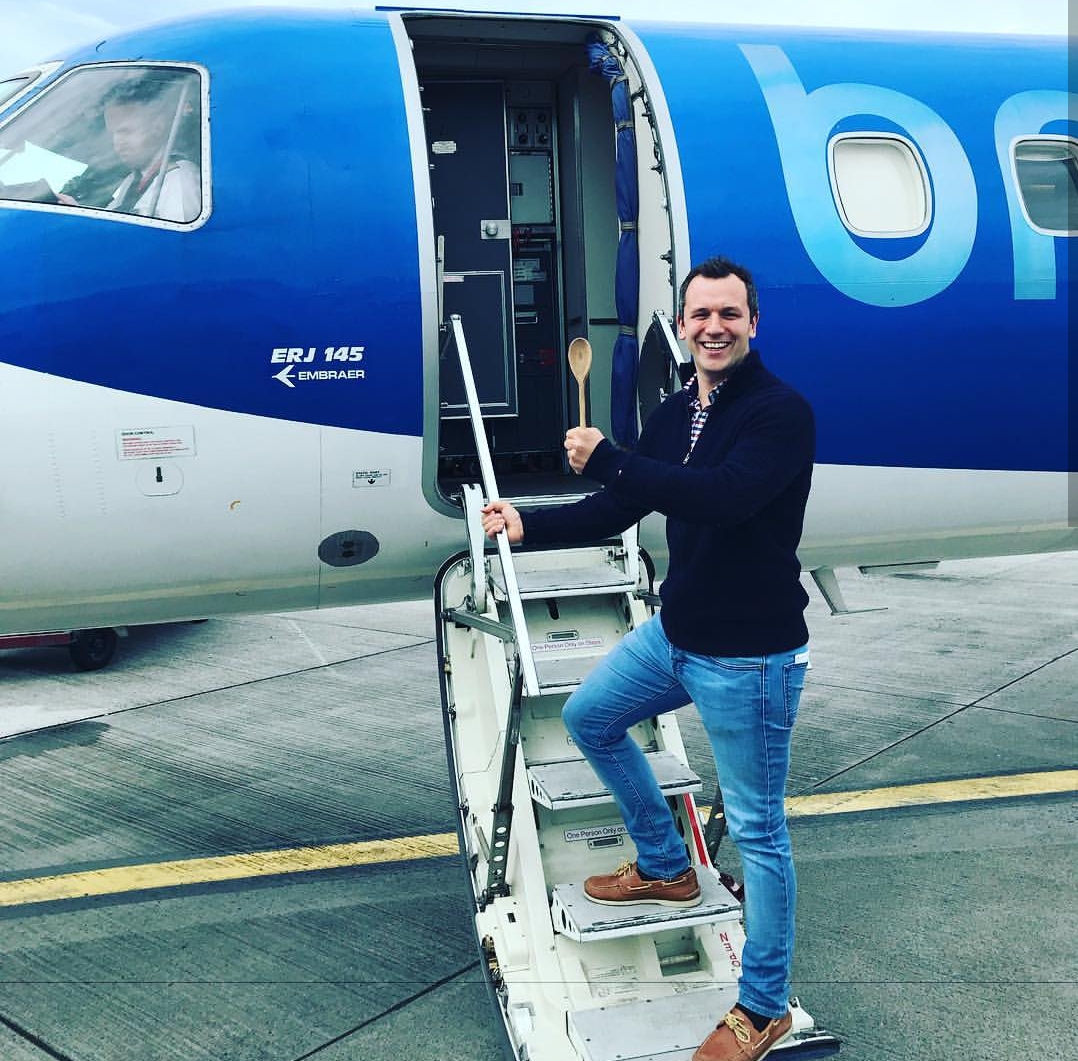 In addition to the porridge making competition, the Cullahill Fair will offer a host of family fun with games and activities, local food, hikes, live music, children’s storytelling, tours of Cullahill Castle and much more.

While you must be 18 or over to enter the PaddyO's Irish Porridge Making Championships, children can also get involved in the Granola Bar Making competition.

Anyone interested in entering the PaddyO's Irish Porridge Making Championships can apply via www.cullahill.ie.

Closing date for applications is 10th June 2018 and the entry fee is €20. The winners of the Irish event will win free flights to Scotland and overnight accommodation in Carrbridge, Scotland for the World Porridge Making Championships and winners must be available to travel to Scotland for the international event.

To kick start the jam packed day on Juy 21, Paddy O’Connel from PaddyO's Cereals, who hails from Cullahill and is a nephew of celebrity chef Rory O'Connell, will lead an early morning walk up Cullahill Mountain taking in the lush Laois landscapes.

The walk will be followed by a delicious breakfast and coffee/tea on top of the mountain, cooked by Paddy himself.

The porridge making heats start at 11:30am and will take place in the Cullahill Community Centre - be sure to get a seat upfront to catch all of the action. The winner of the traditional and specialty will be announced at 4:15pm.

Children can get involved in the Granola Bar making competition which follows the Porridge Making Competition - lots of delicious fun and nutritious learning will take place.

Throughout the day, there will be a Farmer's Market featuring hand-roasted coffees, and a selection of cakes, treats and locally produced ice cream. Along with games for everyone, there’ll be storytelling for children, face painting, tours of Cullahill Castle, music and entertainment.

Following the announcement of the winners, join the victorious porridge champion, participants and judges in the Sportsman's Inn to celebrate the day – there will also be an exciting pop-up restaurant run by FODDER - Aimee Ryan from Rathdowney, Co. Laois. Then put on your stetsons and / or stilettos and dance the night away with our musical entertainment. 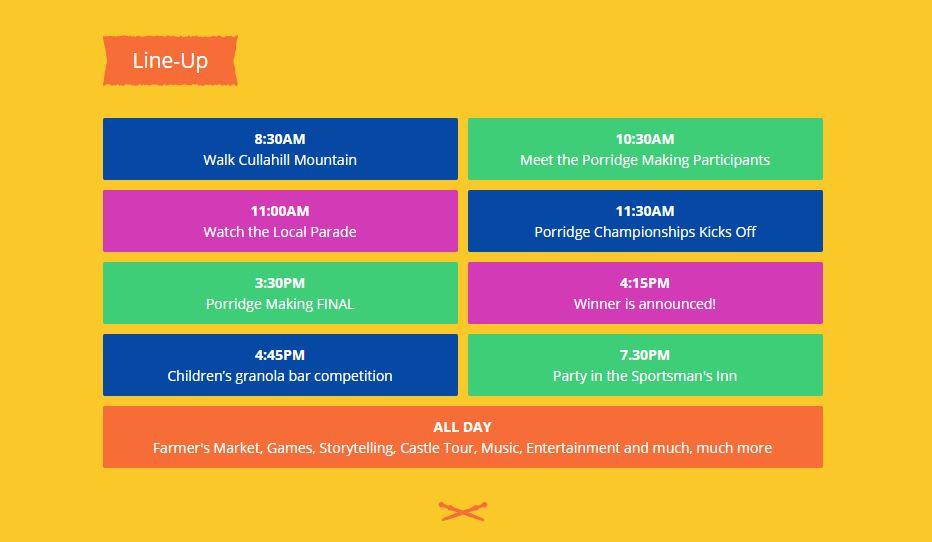 Last year the Cullohill Community Council sought funding from Laois Partnership to carry out a community plan for Cullohill.

The Community Council was successful in its application and has contracted the services of Tom O'Leary of O’Leary & Associates to carry out a five year Community Plan for the village.

Read more about the community plan for the village here.