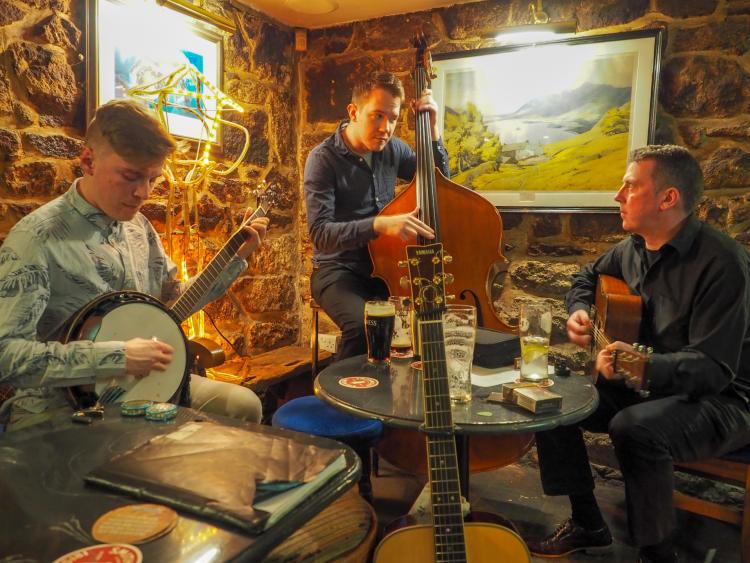 The Blue Light Smugglers are getting set to launch their debut album ‘Record’ in Kelly’s Bar, Borris-in-Ossory this weekend.

It will be a sort of homecoming for The Blue Light Smugglers at the launch as the singer in the band was born and grew up in the village.

Terence Cosgrave is the son of the former doctor in Borris – Dr Paddy Cosgrave – and he went to school in the local primary school.

“I have many fond memories of Borris, and particularly of the fine singers that used to perform in Kelly’s. It was the first place outside of church where I heard harmony singing. And I still have many friends there that are almost family at this stage,” he said.

The album ‘Record’ is a collection of 10 original songs, all written by Terence and performed by his band, The Blue Light Smugglers. They took their name from a pub in the Dublin mountains where they’ve played a residency on Monday nights for the last three years.

The pub – The Blue Light – was associated with smuggling in previous times. A blue light would be shone from up the mountain to let boats in Dublin Bay know that the Customs and Excise officials weren’t on duty.

A shebeen grew up to service the men providing this ‘service’ which later became the ‘Blue Light’.
Terence is joined in the group by Niall Hughes and Luke Coffey on double bass and banjo respectively. He says that while he wrote the material, the group is very much a collaborative effort.

“A lot of people write songs. But bringing them to life is another story. I couldn’t have made this album without Luke and Niall – it’s a three-way collaboration. Always has been,” he said.

Though the album is only being released on Friday, June 7, it has already been played extensively on RTE Radio and local radio.

The band say that for the night of the launch in Kelly’s Bar, they will be playing all the songs from the album – plus a few of their regular favourites.

“We play a mix of country, bluegrass, jazz – even gospel music,” says Niall. “We all grew up in rural Ireland (Hughes in Mayo, Coffey in Roscommon) and we have an affinity for the music we grew up with in those places. People like Hank Williams, Johnny Cash, Bill Monroe, Webb Pierce. We started out playing that type of music and our own sound comes from that.”

The group are best known for their residency in the Blue Light, but they also play a residency on Thursdays in the Hampton Hotel in Donnybrook, and other one-off gigs in other venues around Dublin. Terence had no doubt about the best location for the launch on Friday, June 7 in the new music lounge in Kelly’s Bar and the band at 10 pm.