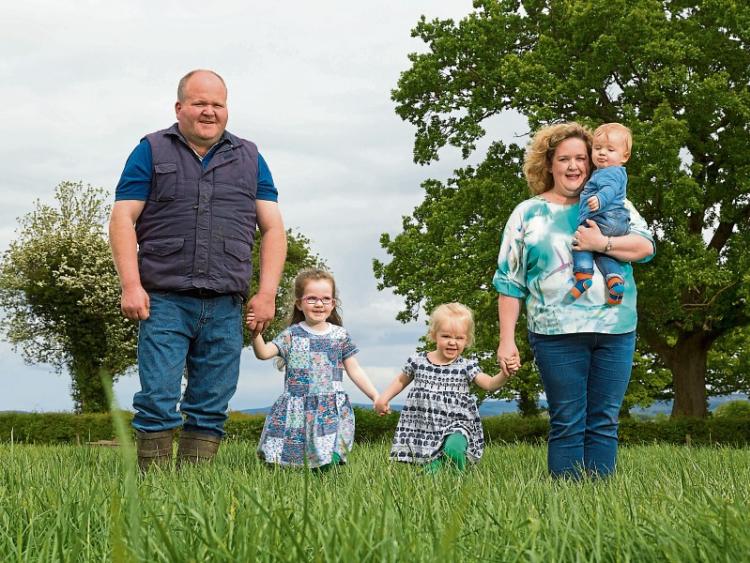 Originally from Portlaoise, Michael bought the then 290-acre farm in 2007. Michael along with his wife Catherine - both former Macra Na Feirme Presidents - have grown the farm further over the past decade by purchasing and leasing more adjoining land and increasing the herd size by 50%.

Michael runs the farm along with two full time staff.

“We are the first generation on this family-farm” explains Michael.

Children Caoimhe (5), Saoirse (3) and Mícheál (1) might be a little young to help out yet - but one gets the impression that it won’t be long!

Doing it right first time – is second nature to Michael & Catherine. “Dairy farming is no big get-rich-scheme” says Michael, “but done right it will pay you back in the long run”. And doing it right seems to be the motto for the Gowings on this busy and efficient 350 cow farm.

Asked what “doing it right” entails – Michael has the answers at the tip of his tongue – as only a shrewd and experienced manager could.

Successful dairy-farming really boils down to 5 key ground-rules in Michael’s book. Eagle-eyed, modest and quick-witted, when Michael speaks you realise that these five simple rules could easily be applied to any management in life – farming or otherwise.

Learning on the job

Not one to shy away from an experiment or try something new – Michael says he never has a closed mind to picking up something new, be it from a discussion group, visitors to the farm, a neighbour or through his own trial and error.

Running a well-defined and straight-forward System: The cows on the Gowings farm graze in a single group. There is no lame or sick herd. This allows for the fastest and most efficient use of labour at milking and setting up grazings. Cows calve from 1st Jan, which is early for a grass-based system, but it suits the Gowings system from a labour, housing and breeding point of view.

Doing the simple things right first time brings great reward in the long run and the smallest of efficiency gains can give a big pay-off.

Calf health is another area where Michael prioritises the basics; “Every last calf here is stomach tubed with biestings - even if he has been sucking. We won’t leave it to chance.”

The 20,000 Gallon underground water reservoir is another smartly-designed feature on the farm. When building the new cubicle house and tanks in 2009, Michael decided that he needed a better reserve of water; “350 cows can drink a hell of a lot of water” he jokes! While there are three wells on the farm, the supply is not great from any of them so they now all feed into the reservoir along with the rainwater collected from the considerable roof area in the farmyard. Michael has the reservoir set up with series of ballcocks at different levels. Rain water is used first, followed by the wells and then “in emergency” the mains supply kicks in.

Planning and Adapting to Change:

2009 was a tough year in dairying and it was no different on Scorduff farm where Michael & Catherine were just getting going in the new venture. And yet a period of terrible milk prices so soon after investing didn’t phase the ever-sanguine Michael. “Look” – he says – “it wasn’t easy; but you just have to cut your cloth to suit your measure in those times and that’s what we did.” That the Gowings came through that commodity price storm even stronger by “doing it right” is no surprise given Michaels considered and flexible approach to management.

Hard Work! The final and most important of Michael’s ingredients of successful dairying. Michael’s system may be consistent and streamlined, but it is no 9-5. Spring time is tough going in terms of hours but a compact calving season means that 90% will calve in 6 weeks. The secret to the compact calving season is simple, he says; “Just take the bull away!”

With a keen interest in Pedigree breeding, Michael’s list of bull breeds is not what one would expect on a typical dairy farm. Stock bulls include BB, LM, SI, SP, HE and AA. Michael operates the bulls on a rotation basis, with two bulls running with the cows at all times. AI is all FR for the first four weeks, then changing to beef and finally the stock bulls go out for the last three weeks. All the AI is carried out by Michael, who also does some ET work and keeps a small number of Pedigree Beef cows on the farm.

Michael likes a big, functional, fertile cow. He sees EBI as a useful tool, but only one of a range of tools he uses to select breeding stock. This spring brought great dividends with an elite bull calf being bought for AI.

The silage ground is typically cut twice and the reseeding rotation involves sowing winter triticale for whole-crop before putting back into grass the following August. He finds this system especially good for keeping control of docks and fields are very level afterwards as a result of being ploughed twice.

Michael replaced 150 old Newton Rigg cubicles with new EASYFIX cubicles and mattresses two years ago. He sees cow comfort as exceptional and appreciates that they are very durable and hygenic. And they are safer: “I’ve seen cows do some stupid things in the shed – but I’ve yet to see one even try to get stuck in an EASYFIX Cubicle!”

Asked about plans for further expansion, Michael's answer is straight-forward - “Down the line I’ll milk more cows if it pays to milk more cows”. “For the moment, the restrictions here are no longer quota, but sourcing good labour and the need to find a little extra family time at the end of a long day”.

Michael & Catherine Gowing are looking forward to welcoming their family, friends and other dairy farmers to the Dairy Open Day at Scorduff, Brosna, Birr, Co. Offaly on Thursday 22nd June 2017.