Initiative is being run by voluntary group, Feed Our Homeless 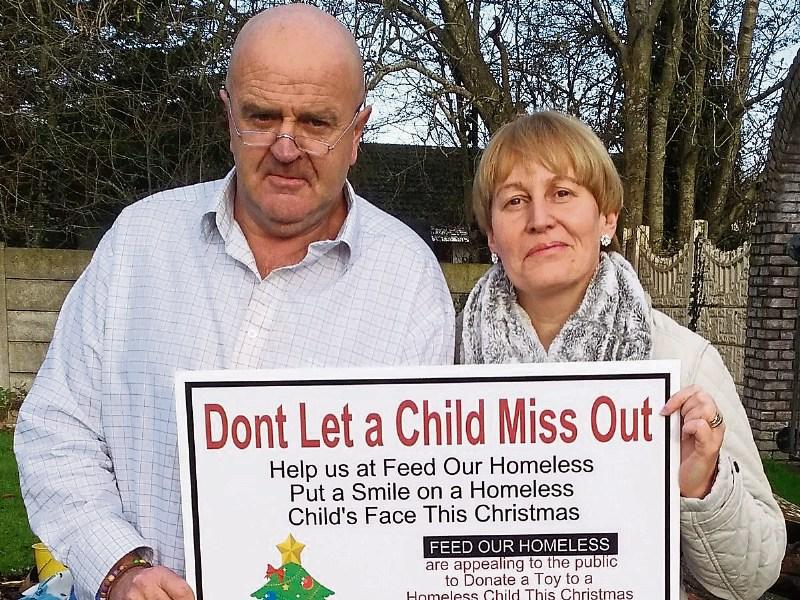 Pictured are Tom Duffy with volunteer for the Christmas toy appeal, Carmel Henderson

The kind hearted people of Laois are being asked to donate a Christmas toy or a selection box for children who are living in emergency accommodation to help put a smile on their faces over the festive season.

The initiative is being run by voluntary group Feed Our Homeless.

Founding member Tony Walsh asked September’s Laois man of the month Tom Duffy to be its ambassador for the toy appeal in Laois.

Mr Duffy gathered 1,000 sleeping bags after the Electric Picnic back in August which were distributed by various voluntary groups including Feed Our Homeless to people who are sleeping rough.

At the launch of Don’t Let a Child Miss Out in Portlaoise on Tuesday last Mr Duffy said,

“This is a local appeal and I am delighted to have been asked to run it in Laois by Tony Walsh and Natasha Morgan.

“There’s 3,125 children living in emergency accommodation throughout the country, every county is affected by this crisis.

“We are asking people to spare a thought for these children, many of whom have been born into homelessness.

“The idea is simple.

“We are appealing to people to buy an extra toy this year which doesn’t have to be huge, gift wrap it and label it either boy or girl and write the age group that the toy is suitable for.

“The response has been fantastic and we’re only getting started.

“ I am appealing to business owners and schools all around the county to collect toys for this great cause and we will supply posters and leaflets to all who get involved.”

There are several places where toys can be brought to.

In addition, Laois Shopping Centre manager Kevin Doyle has given the group permission to collect toys in the centre for what he described as “a wonderful cause” on Saturday 2 December from 9am until 6pm.

Both SuperValue on the Abbeyleix Road and Mulhall’s SuperValue in Portlaoise are also allocating collection days with dates to be announced.

Drop off points include Tom Duffy’s home in Glenbarrow in Portlaoise and Bernie Tynan’s Preschool in Beechlawn, also in Portlaoise.

The closing date for donations is Friday, December 15 at which stage all toys will be collected to allow time for distribution.

Should there be excess gifts they will be distributed to children in surrounding areas.

Director of the voluntary group Feed Our Homeless Natasha Morgan said, “We are organising this initiative in as many counties as we can.

“We are delighted to have Tom on board in Laois.

“We saw how kind the people of lovely Laois are during Tom’s sleeping bags appeal after the Electric Picnic.

“The toys and selection boxes will be collected in communities of Laois and therefore will be distributed to the children who need them within those communities.”

Volunteers will be needed on various days at various locations, most likely in the first two weeks of December.

For any schools, businesses or organisations in towns or villages around the county who wish to get involved or for those who would like to volunteer in any way phone Tom Duffy on 087 627 1309.

The organisers wish to thank everyone for their help and support in advance.