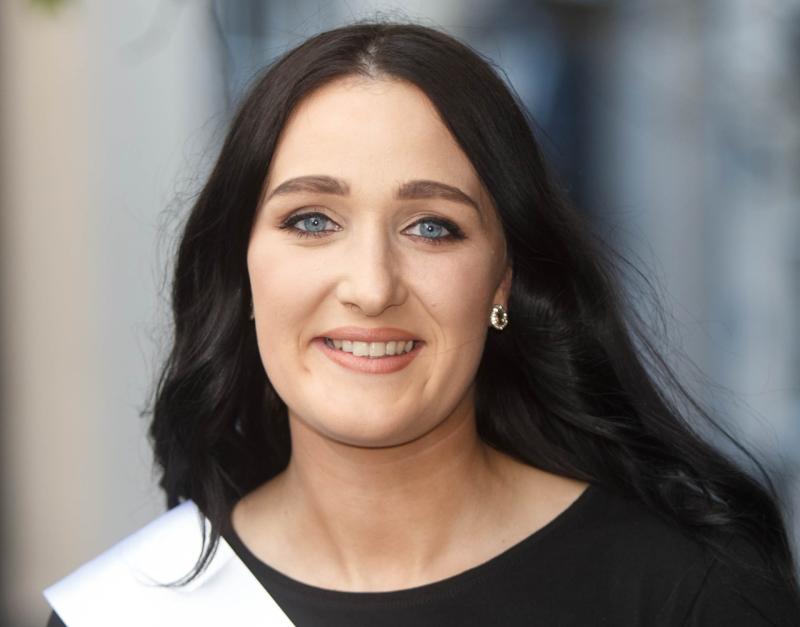 The newly announced Laois Rose 2018 Grainne Hogan from Camross, is absolutely ready to embrace her busy year ahead.

The tall dark 23 year old farmer from Camross talked to the Leinster Express after she was announced on stage as the winner, on a night of craic and talent thanks to all 17 entrants.

“It was a complete shock to win, it's surreal,” she said.

She has been watching the Rose of Tralee on television since she was age 6.

“I've been ready for this for I don't know how many years, bring it on! she said.

Grainne qualifed as one of three females in a class of 103 from Gurteen agricultural college in 2015.

She works for Noel and Breda Dooley in Ballacolla, milking 110 cows every day at 8am and 4pm.

“I milk, spread slurry, fertiliser, I can do it better than any of the lads. I look like this when I'm doing it, with the bit of highlighter,” a glamorous Grainne joked on stage with MC Ollie Turner.

She got him working “milking” Daisy the wooden cow, courtesy of her Macra club in Camross, enthusiastic supporters for her on the night.

Grainne loves to drive huge tractors, she grew up on a farm and keeps a couple of sheep on the side.

Every Thursday she goes to the livestock sale in Mountrath with her neighbours.

Ollie did a great impression of a livestock sale to entetain the audience.

Grainne gave him some tips on bidding for cattle at the mart, one of her favourite spots to visit.

“I just raise the hand and say 'I want this'. You have to be tough,” she said.

Cows can be a danger.

“Dairy cows like anyone with a baby don't want anyong coming near them,” she said.

She has a soft spot for her little nephew Frankie who has spina bifida.

“He is paralysed from the belly button down. He got a new wheelchair last week, he'll be three this month, no matter what happens, he is always happy, I am so inspired by him,” she said.

Grainne gave a special thanks to her mother Anne for her constant support, and Lar Hogan from Sheeran's Pub her sponsor, her friend Terry Moore, her nan Sadie Hogan and her brother Eoin all there for her big night.

"I knew she could make it, she always had a special way about her," said her proud mother.

Below Grainne with her mother Anne. 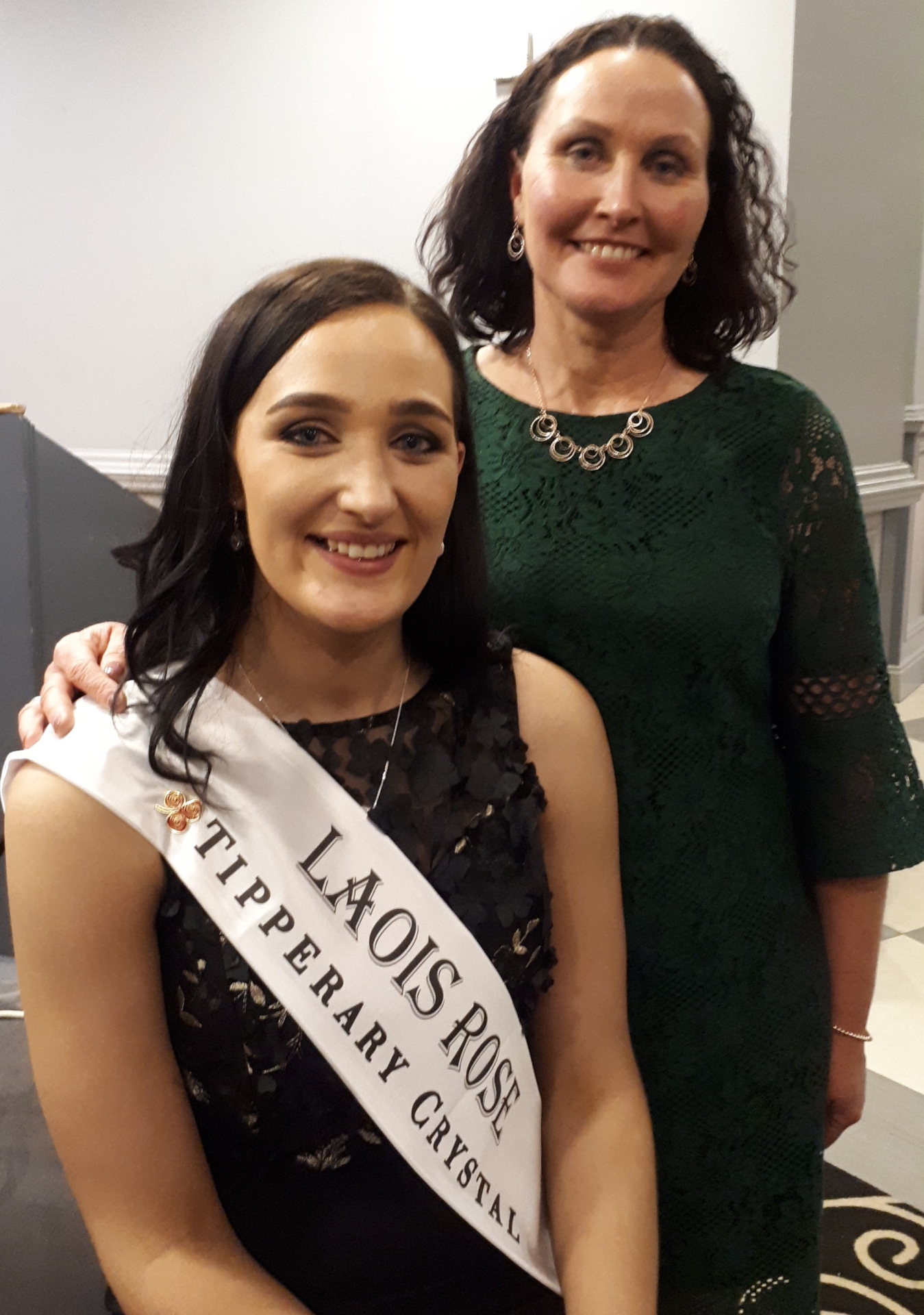 Her former teachers from Killanure NS, Fiona Delaney and Niamh Reynolds were also there with a big banner to support Grainne, who went to secondary school in Mountrath Community School.

Grainne plans to make the most of being a Laois Rose.

“I'm looking forward to meeting new people and organisations, hopefully I can make a difference,” she said.

Her Rosebud was Cheola Dunne, whom Grainne used to babysit. Barrowhouse GAA also won on the night, Grainne's nominated club for the raffle proceeds.

The cows had to look elsewhere to be milked on Monday, with Grainne enjoying a deserved day off.

For all the news about Laois Rose 2018, see our dedicated webpage here.

Below Grainne moments after she was announced as Laois Rose 2018, with MC Ollie Turner. 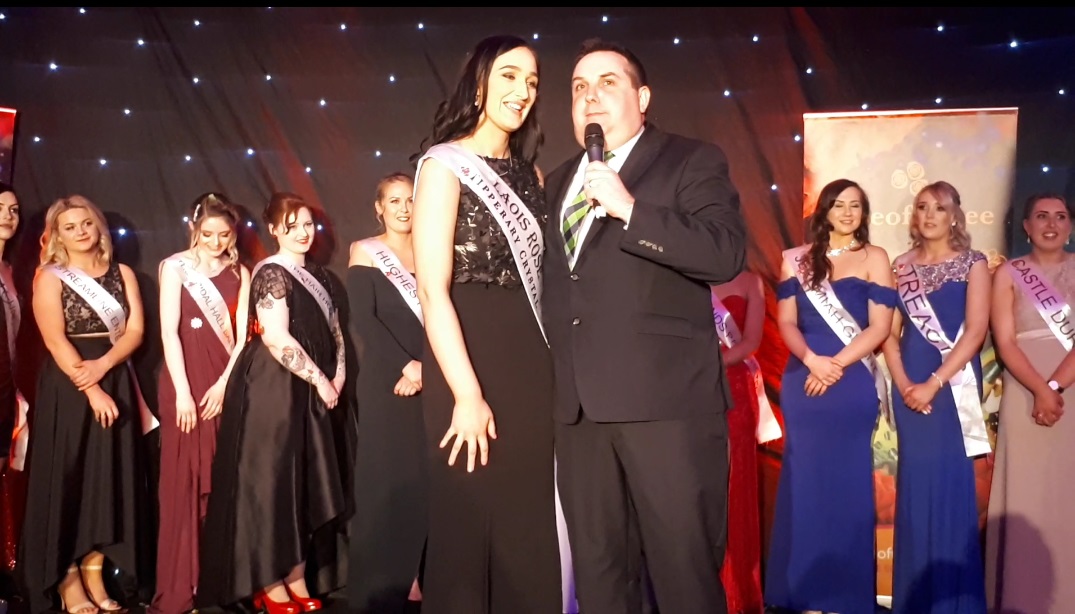