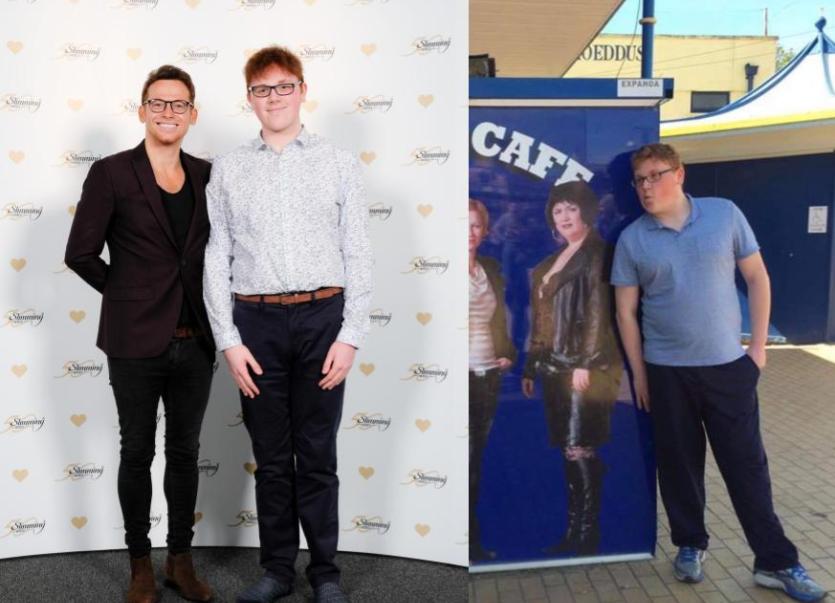 A 16-year-old from Portlaoise has lots to celebrate after losing 5st 3lbs to reach the finals of a national slimming competition where he met TV star, Joe Swash.

Brent Donohue was over the moon to make the final 28 of Slimming World’s Young Slimmer of the Year 2019 competition. He represented the 25,500 16 to 21-year-olds attending 19,000 Slimming World groups across the UK and Ireland.

The competition recognises the enormous achievements of young people who are making long-term lifestyle changes to become healthier, happier and more active. Joe, who co-hosts the I’m A Celebrity…Get Me Out of Here spin-off show Extra Camp, came along to make the day at Slimming World’s Derbyshire head office extra special.

Growing numbers of young people across the UK and Ireland are putting their health at risk because of obesity. Many young people are so severely overweight that they’re even beginning to suffer serious conditions like Type 2 diabetes and high blood pressure. Slimming World supports people of all ages to make changes to their lifestyle and develop healthy habits for life. Since 2006, the organisation’s Family Affair programme has provided support free of charge for 11 to 15-year-olds who attend with a parent or guardian.

Since joining the Abbeyleix group Brent has slimmed from 18st 12.5lbs to 13st 9.5lb, and feels on top of the world. As a result of his incredible achievement, his fellow members in the Abbeyleix group voted for him to represent them in the semi-finals of the Young Slimmer of the Year 2019 competition.

Brent says, “I knew that I had an issue with my weight and that I needed to address it but like many young people I just didn’t know where to start when it came to making healthier choices. I was starting to become more and more self-conscious, and my weight was affecting me in lots of different ways. I would often feel as though I was the only person my age who was overweight and it was very isolating. My Slimming World group helped me to feel included, and I gradually started to feel better about myself.

“I felt nervous at the thought of joining a Slimming World group because I didn’t think people my age did things like that and I was worried I might get judged for being young and overweight. I was wrong though, everyone was so welcoming and there were a few other young people there too – so I felt a lot more at ease.

“My friends and family have all said that they are proud of my achievement – and I’m proud of myself too actually. I discovered that it’s possible to lose weight by satisfying your appetite and without going hungry! I enjoy everything from chicken to steak, pasta to potatoes and pile my plate with loads of veg. My favourite meals are curries and chicken in black bean sauce.

“I’ve learned to cook from scratch and just have to make a few healthy swaps, like using low-calorie cooking spray and choosing lean cuts of meat. Now I have a better understanding about the relationship I have with food.

“I also began to think about becoming more active, so I’ve started walking and I can walk up to 18km now. I also swim and go to the gym about four times a week and I love it. I’ve learnt so much from my Slimming World group, as well as lots of guidance and support, they’ve helped me to develop healthy habits that will stay with me forever.”

Joe was blown away when he met Brent at the semi-finals and said: “I honestly can’t believe the difference in Brent, to have achieved something like this at such a young age is just amazing. I think a lot of people think that losing weight is all about eating less, but everyone I’ve met today loves food just as much as me! It takes a lot to turn your life around like that, so hats off to Brent for setting his mind to something and actually being strong enough to see it through.”

Carmel Minogue, who runs the Abbeyleix Slimming World group which Brent attends, agrees: “I’m so proud of Brent. What he’s achieved is so much more than just losing weight. I’ve watched Brent transform into a strong and confident person who has the world at his feet. Joining Slimming World has given him the knowledge and skills to make healthy choices and develop new active habits that will stand him in good stead for the rest of his life. Most of all it’s given him the self-belief to achieve whatever he puts his mind to.

“Anyone who wants to lose weight – whatever their age – and wants to know more about the difference that Slimming World can make is welcome to pop along to my group at Abbeyleix Manor Hotel or call me on 0872972305.”

Although he made the top eight, unfortunately Brent was not the overall winner of the competition. Slimming World’s Young Slimmer of the Year 2019 was Lucie Hadley from Peterborough who lost 10st.