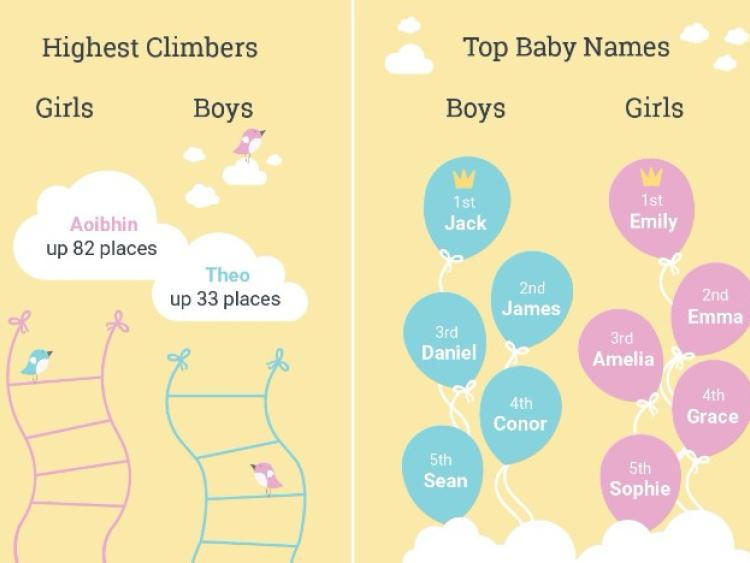 The timing is slightly unfortunate but as Storm Emma is about to hit it's been announced that Emma is the most popular name for baby girls in Laois.

The Central Statistics office today confirmed the most popular names for babies born to mothers in Laois and the other counties of Ireland.

Emma was confirmed as the most popular name for girls while Jack and Conor shared joint top spot for boys born to Laois mums.

Nationally Jack has reclaimed the top spot as the most popular baby boys name in 2017, a position it has held since 2007, with the exception of 2016, when James was the most popular choice. Jack was followed by James, Daniel, Conor and Sean as the first five most popular names for boys in 2017.

Emily, Emma, Amelia, Grace and Sophie were the top five names of choice by parents for their newly arrived baby girls. Interestingly, not one of these five names appeared in the top 100 names for girls a half century earlier.

Back in 1967, John, Michael, Patrick, James and Paul were the names most favoured by parents of newborn baby boys. While there were 2,981 baby boys named John 50 years ago, taken together the five most popular boys’ names in 2017 accounted for 2,765 baby boys.

As is evident from the tables, girls are given a wider variety of names than boys, with 4,493 girls' names registered compared to 3,472 boys.

In 2017, Jack was the top name for boys in Kildare, Louth, Meath, Wexford, Wicklow, Clare, Cork City and County, Kerry, North Tipperary, Waterford County and Mayo. It also shared top spot in South Dublin with Adam and James. In Limerick City, Jack shared the honours with Adam, while Jack along with Conor was the most popular in Laois.

Murphy was the most common surname followed by Kelly.