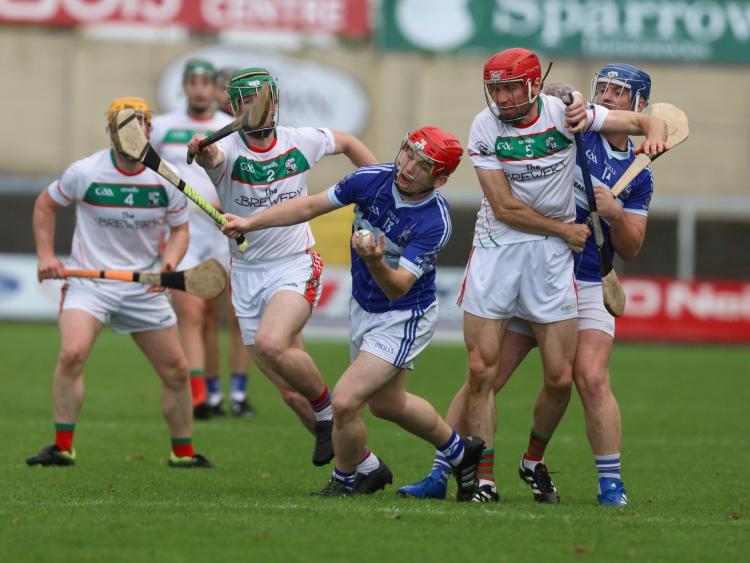 Action from the Laois SHC Round 2 clash between Castletown and Rathdowney-Errill at O'Moore Park. Photo: Alf Harvey

Rathdowney-Errill hit four goals on route to a seventeen point victory over Castletown in the second round of the Laois Senior Hurling Championship at O'Moore Park tonight, Laois captain Paddy Purcell bagging a hat-trick for the winners.

Castletown took an early lead in this game with Gearoid Gaughan sending over a free in the first minute before Aaron Gaughan doubled their lead a minute later.

Rathdowney-Errill settled themselves with their first score arriving from the hurl of Mark Kavanagh, and their second from the same man from a 65 after Ross King's shot was turned behind by John Paul Bennett in the Castletown goals.

Their first goal arrived a minute later, Laois hurling captain Paddy Purcell on hand to provide the finish to push them ahead.

Castletown hit the next two through Martin Phelan and Conor Phelan, but Rathdowney-Errill hit back through Brandon McGinley and Tadgh Dowling to keep their lead at three points.

Castletown closed the gap with a Gaughan free, but Rathdowney-Errill were knocking on the door as Bennett was forced to save another Ross King attempt at goal. Rathdowney pushed on with a brace of Kavanagh frees before Dylan Conroy pulled one back for Castletown.

Gearoid Gaughan restarted the proceedings with a pointed free for Castletown, but Paddy Purcell struck for his second goal two minutes into the half. Rathdowney-Errill followed with points from Kavanagh to push their lead out to ten points.

Gearoid Gaughan returned two frees for Castletown, but it didn't halt Rathdowney-Errill as Kavanagh sent over two himself - the first from inside his own 45 - before Dylan Conroy sent over Castletown's final point on 46 minutes.

Rathdowney-Errill raced to the finish line from here with Paddy Purcell completing his hat-trick ten minutes from time. Kavanagh (2), Purcell, Jack Kelly and Tadgh Dowling all added to the scoreboard for the eventual winners.

Rathdowney were reduced to 14-men in the first minute of injury-time when Mark Kavanagh received his marching orders for a coming together with Conor Phelan, but Rathdowney-Errill finished with seventeen points to spare as they now top the group.