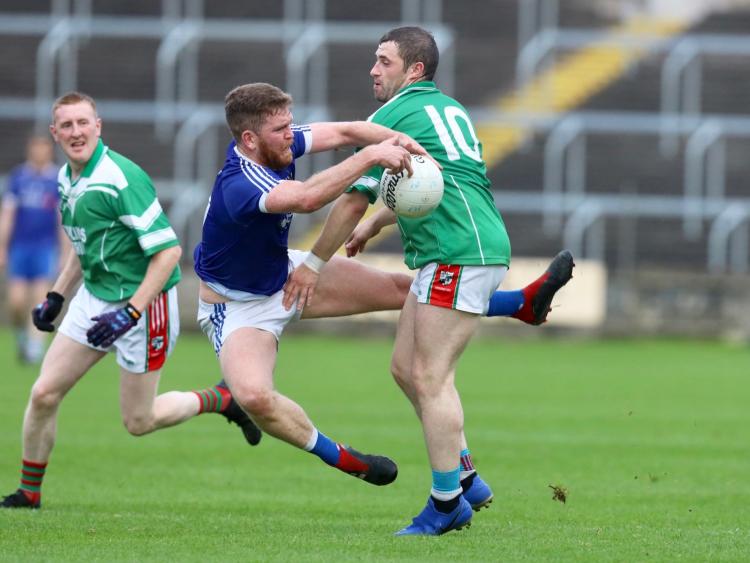 Despite putting up a good fight in the opening half, Mountmellick couldn’t maintain that pace, and Errill, spearheaded by Laois hurling captain Paddy Purcell, marched to victory.

Eoin Bourke continued Errill’s great start by launching over a 45’, as the midfielder connected with the ball sweetly.

Mountmellick’s Jordan Williamson reduced the deficit back to a goal, but further Errill scores from David Poynton and Paddy Purcell (free) had them in pole position.

However, Mountmellick responded strongly to go down the other end and earn a penalty. Colin McEvoy’s ball into Robbie Hibbits resulted in Errill corner-back Daniel Bourke bringing him down in the square.

Darragh Hanlon stepped up to the plate, and while his first attempt was well saved by Brian Meehan in the Errill goals, Hanlon made no mistake with the rebound.

Conor Comisky found his range from the very next play to leave Mountmellick just a single point behind now.

David Poynton placed over in response for Errill after they broke at pace from a throw-in, but Mountmellick got themselves on level terms thanks to Jordan Williamson and Robbie Hibbits efforts.

However, that good work was wiped out when Errill strick for their second goal. Vinny Cleere was quickest to react to a breaking ball, and on the ground, he fired it into the Mountmellick goals.

Great running from Paddy Purcell resulted in David Poynton pointing once more, and Errill raced into the dressing room with a 2-6 to 1-5 lead.

Robbie Hibbits grabbed the opening score for Mountmellick upon the resumption, but that was their last score of the match, as Errill took complete control.

Paddy Purcell picked off two points from placed balls, and then Purcell showcased his superior pace and power by sauntering through after playing a give and go with Tadgh Dowling to fire in Errill’s third goal.

Tadgh Dowling, John Purcell and substitute Matt Meehan (two) got in on the scoring act before the game finished, as Errill lifted the Junior ‘B’ trophy again.