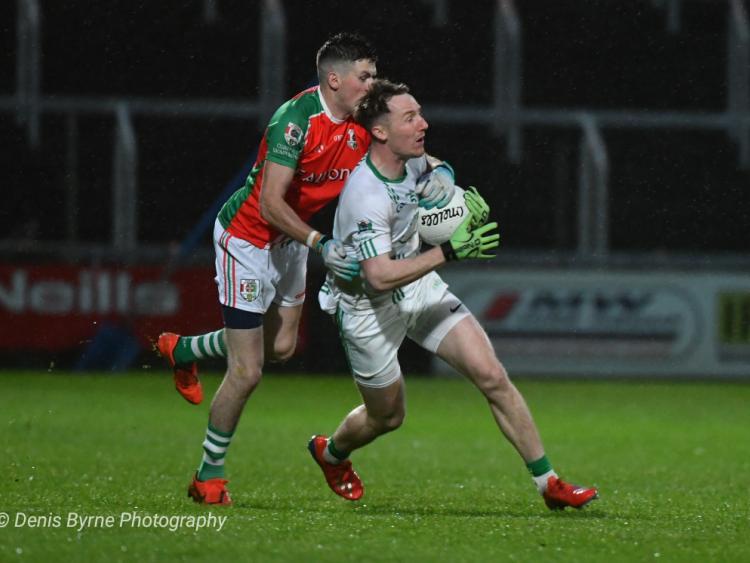 Rosenallis were crowned Laois Intermediate football champions in O'Moore Park tonight following a nail-biting finale that saw Clonaslee St Manman's finish with 12-men in what was a titanic tussle between the neighbours.

It took until the twentieth minute for the game to spark into life, the first of four red cards providing the catalyst to the game.

Rosenallis strolled four points to no score ahead by the ninth minute of the game as it was all one-way traffic.

Eoin Dunne set the scoring underway two minutes in with a tricky free from out near the sideline on the stand side in O'Moore Park. Ronan Murray followed suit to convert a placed ball from the opposite side, before he and Eoin Dunne registered their third and fourth points respectively with Clonaslee still yet to get off the mark.

A minute later Clonaslee opened their account when Niall Corbet took off on a superb run before finishing with a composed point to break the deadlock ten minutes in.

Rosenallis picked up where they left off with Mark Dunne (2), Murray and a brilliant outside of the boot effort from Laois senior hurler John Lennon leaving them seven points clear with 16 minutes on the clock.

The catalyst to the game arrived 20 minutes in, Darren Hogan receiving his marching orders for an off-the-ball incident. In Paul Galvin-esque fashion, when referee Des Cooney brandished the red card the Clonaslee man swiped at the referee's book before making his way off the field.

Seven points down and now reduced to 14-men, Clonaslee could have been forgiven for throwing in the towel. However, the incident only proved to spur them on as they closed out the final ten minutes of the half by outscoring Rosenallis five points to one.

Corbet accounted for all but one of Clonaslee's five, Paddy Hyland kicking the other, as they went in trailing by three points at the interval - 0-9 to 0-6.

Corbet picked up where he left off after the restart, dissecting the posts two minutes into the second half. Rosenallis settled with the next two points through Brian Fitzpatrick and Mark Dunne.

Substitute Bob Downey brought it back to a three point game before Clonaslee were reduced to 13-men following Diarmuid Conroy's straight red eight minutes from the end of normal time.

As the first red card did, Conroy's sending ofd injected life into Clonaslee and they went up the field and struck for a crucial goal through Liam Senior to level the sides.

With 58 miinutes on the clock substitute Cian Barrett curled over to give Clonaslee the lead for the first time in the game, but Mark Dunne replied in the second of six additional minutes to set up a nervous finish.

Clonaslee were then left with just 12 players on the field following Glen McEvoy's second yellow, but Rosenallis also lost a man with Man-of-the-Match Mark Dunne picking up a second yellow too.

Rosenallis secured the title with a late brace of points from substitute Joey Shelly as they held out to be crowned Intermediate champions.