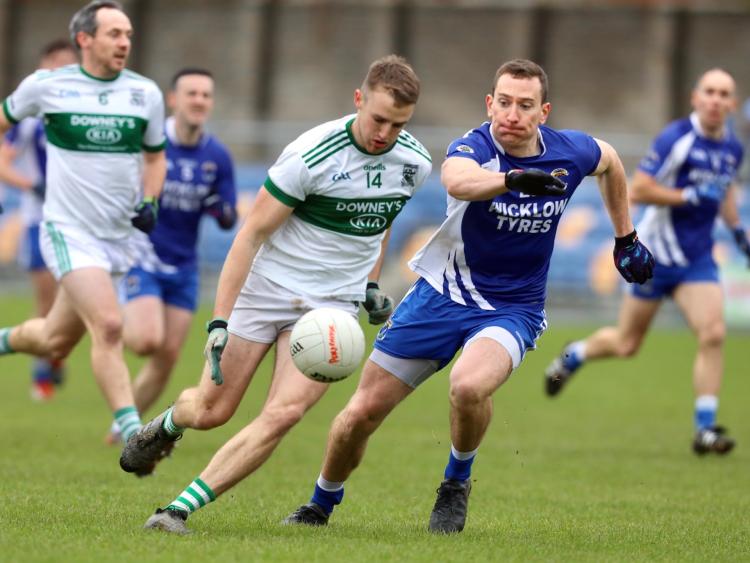 After 80 minutes of football, penalties were needed to separate two evenly-matched sides at Aughrim Park and it was the Laois champions Portlaoise that prevailed with Craig Rogers slotting home the decisive penalty.

With the rain holding off and heavy underfoot conditions at Aughrim Park, Portlaoise settled the quicker of the two sides. Two minutes in Portlaoise registered the first score of the day when Ciaran McEvoy fed Ricky Maher who spun out of the tackle before dissecting the posts for The Town.

A fine move between Lillis, Benny Carroll and Conor Boyle saw the latter double the Portlaoise lead five minutes in, but the Wicklow champions were yet to get going.

St Patrick's roared into life with seven minutes played, full-forward and captain Stephen Duffy getting the better of the Portlaoise defence with a deft touch followed by a sublime finish on the half-volley to send the ball beyond Michael Nolan in the Portlaoise goals.

Portlaoise replied from the resulting kick-out to draw back level with a Benny Carroll free from close range after Ricky Maher was fouled.

Feeling the home crowd getting behind them as the game grew on, St Patrick's took the lead with a quick brace from midfielder Matthew Traynor and John Crowe to send them into a lead they would hold until the break.

Portlaoise broke their ten-minute drought with a Bruno McCormack free after he was fouled himself, but St Patrick's went straight back on the attack and converted a free of their own after an uncharacteristic mistake from centre-back Brian Mulligan.

Portlaoise reduced their arrears to the minimum on the stroke of half-time through a sweet point from the recently announced Laois Senior Footballer of the Year, Kieran Lillis, with a fine effort from the outside of his right boot. With the half in injury-time, St Patrick's galvanised their lead with a Thomas Kelly's second point of the day to send the Wicklow champions in with a two point advantage.

Portlaoise certainly didn't have things their own way in the opening half, and the second-half proved to be much of the same.

The first score of a slow-burning half didn't arrive until seven minutes in, Portlaoise striking first with a Bruno McCormack free. St Patrick's returned fire a minute later when Duffy and Bryan Doyle combined to see Doyle split the posts.

Portlaoise introduced Laois goalkeeper Graham Brody in place of Mick Nolan in an effort to shake things up, but five minutes after his introduction they were dealt a blow when they lost veteran forward Bruno McCormack was sent to the line for a black card.

An outside of the boot strike from Conor Boyle was returned by Bryan Doyle, and then Dean Hurley and Benny Carroll traded scores as one point still separated the sides heading into the final five minutes.

With the game in the second minute of injury-time and Portlaoise searching for that all-important equaliser, Kieran Lillis showed great leadership to step up and kick his second point of the day to send the game to extra-time.

Portlaoise kicked the first score of extra-time with substitute Ronan McEvoy raising a white flag for his side. A minute later, St Patrick's captain Stephen Duffy landed a booming point from distance to a massive cheer from the home support.

The home side got in for their second goal of the day when Paul O'Brien capitalised on a high-ball into the Portlaoise square, but Niall Rigney's side replied instantly with a Paul Cahillane point - but it was to be his last involvement as he hobbled off with an injury straight away.

Portlaoise struck for their only goal three minutes into the final half of football, Kieran Lillis providing the finish after patient build-up from Portlaoise to give them the lead for the first time siince the fifth minute.

With two minutes remaining St Patrick's levelled the game for a final time, Matthew Traynor slotting the all-important point to send the game to penalties.

In what was a Laois club's first involvement in a penalty shootout, Portlaoise persevered after a nail-biting finale.

St Patricks' Thomas Kelly stepped up to the first penalty but saw his shot blaze over the crossbar. Conor Boyle followed for Portlaoise and duly tucked away his penalty.

Captain Stephen Duffy cooly dispatched St Patrick's fifth and final attempt to set up Craig Rogers for the decisive penalty which he duly slotted to a huge roar from the travelling support.

Portlaoise now advance to the semi-finals where they will meet Carlow champions Eire Óg after their victory over Kildare champions Sarsfields in today's other quarter-final.