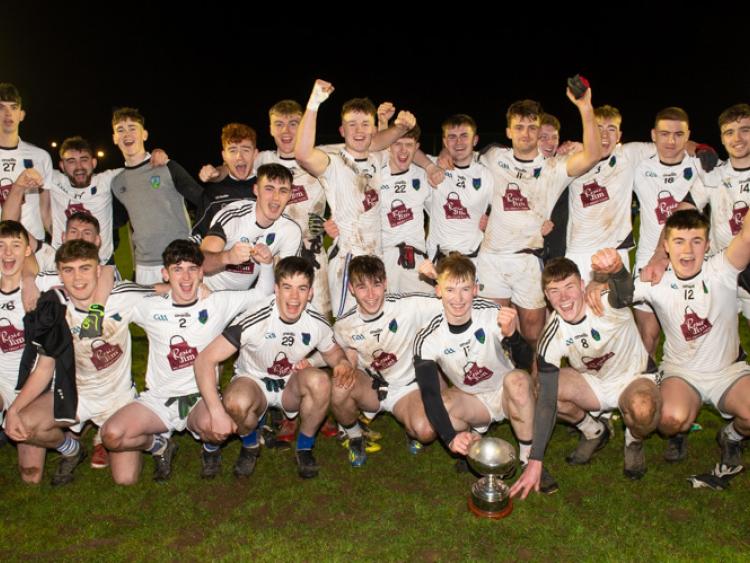 Courtwood-Emo claimed the Laois U-20 football crown over Portarlington following a dramatic finale that required extra-time to separate the sides in Bill Delaney Park, Stradbally on Friday night.

It was Courtwood-Emo who had the last laugh though, as after an end to end and gruelling eighty minutes of football, they managed to kick the last two scores to lift the first-ever U-20 'A' championship in Laois.

Portarlington settled the quicker in Bill Delaney Park, with Daragh Galvin getting them on the board before midfielder Sean Michael Corcoran slotted a free between the posts.

Daragh Galvin nearly added a goal to his point, but Courtwood-Emo goalkeeper managed to get low and save his shot. This seemed to rile up the Emo-Courtwood lads, and they were level shortly after thanks to a super score from Rory Doyle and a Niall Dunne free.

Portarlington kept the pressure on though, with Sean Michael Corcoran blasting over, although the goal chance was on. Jordan Fitzpatrick, who came on as an early first half substitute for Portarlington, made his presence felt early with point from play.

Strong running from Padraig Kirwan drew a foul, and Niall Dunne duly placed over the free to level it again.

Portarlington grabbed the last score of the half through Rioghan Murphy, and they went into the break 0-6 to 0-5 ahead.

Courtwood-Emo started the second-half excellently, with Rory Doyle popping over a nice score before a Jack Owen's point had them in front.

Sean Michael Corcoran levelled it once more with a converted free, but Courtwood-Emo kicked three scores on the trot to take the initiative.

However, Portarlington refuses to lie down, and they overturned the lead once again. Colin Slevin (two), Daragh Galvin (two) and Ronan Coffey (free) pushed Portarlington back ahead by the minimum.

Between that passage of time though, Courtwood-Emo could have easily had a goal. Alan Kinsella crashed the ball off the bar, before Jack Owens' rebound attempt was heroically blocked on the line by Portarlington full-back Alex Mohan.

However, Courtwood-Emo did get their goal near the end of normal time. Sean O'Flynn fed Rory Doyle and the joint captain burst the roof of the net with his finish.

It looked like he had bagged the winner at this stage, but such was the nature of this epic contest, there was room for another twist. Jack Owens was put under pressure close to the Courtwood-Emo goals, and a free into Portarlington was awarded for over-carrying.

Ronan Coffey showed nerves of steel to send over the equaliser, and there was time for no more as extra-time was now on the agenda.

Courtwood-Emo opened the scoring for extra-time through a Sean O'Flynn point, but Portarlington managed to hit back with the only two other point of the half and that meant they held a one point advantage at the end of the first half of extra-time. Coffey and Corcoran (free) were the scorers.

Courtwood-Emo quickly regained the lead in the second-half of extra-time though, with Cian Doyle and Paul O'Flynn raising white flags. Curty Lyons levelled it once more for Portarlington, but Courtwood-Emo finished strongly with two Dunne points from frees to see them crowned champions.