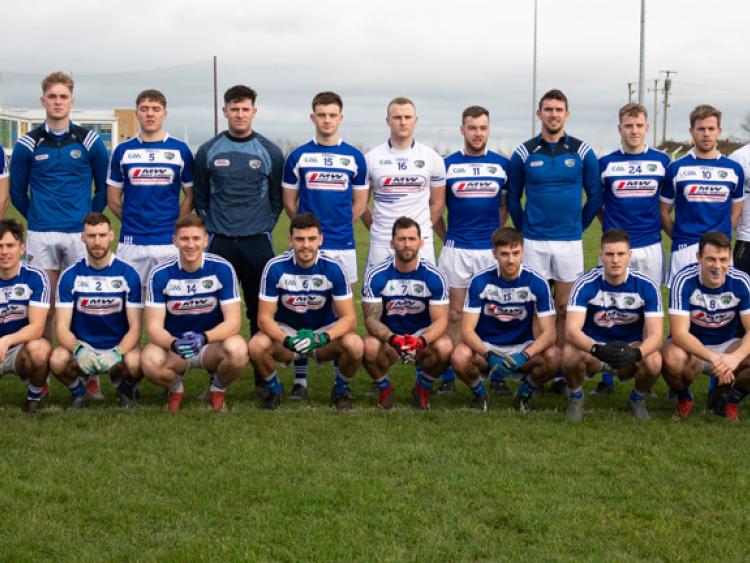 The Laois footballers lost to neighbours Offaly by two points in the opening round of the O’Byrne Cup today at McCann Park, Portarlington, in what was Laois manager Mike Quirke’s first game in charge.

An experimental Laois side that featured five debutants in the starting team as well as a further four more off the bench as Quirke took full advantage of the competition to field 24 players across the 75 minutes of football. Likewise, Offaly manager John Maughan fielded 21 players in total.

The sides went in level at the interval, 2-5 to 1-8, but Maughan’s Offaly side finished the stronger as they made use of their numerical advantage due to Evan O’Carroll’s black card and resulting 10-minute sin-bin under the new rules.

Laois were first out of the blocks at McCann Park, an excellent crossfield pass from Eoin Lowry found Evan O’Carroll who offloaded to debutant Darragh Connolly to finish the move four minutes in.

Laois almost had a goal minutes later but for a last-ditch clearance off the line by Offaly defender Cian Donohoe.

Offaly got off the mark shortly after when Edenderry’s Jordan Hayes launched one over from 40 metres out. Laois replied with a point from midfielder Paddy O’Sullivan who was playing at his home ground, with the assist coming from the impressive Connolly.

Offaly found their stride to rattle off the next three points in a row, all from the lively Bernard Allen operating at full-forward, to give Offaly a two point lead.

Just after the 20-minute mark Laois caught Offaly for two goals in as many minutes. The first arrived after former League of Ireland soccer player Garry Comerford floated the ball across the square to fellow debutant, last year’s captain of the Laois U-20s, Diarmuid Whelan to fist to the net. Less than a minute later Paddy Dunican was left to pick the ball out of the net again, this time St Josephs’ Michael Keogh weaving his way through the Offaly defence before poking home.

Offaly steadied with a Cian Farrell point, but Laois hit for two more through frees from Evan O’Carroll and Comerford.

Offaly closed out the half on a high due to their late flurry of 1-3. Points from Ruairi McNamee, Bernard Allen and Anton Sullivan were followed by a neatly finished goal from Cian Farrell’s rasping shot to send the team in level at half-time.

Laois opened the second half with two Evan O’Carroll frees sailing over, the first from the 21m line and the second from 45m out.

Offaly added points through Bernard Allen and substitute Michael Brazil to back on level terms, but Laois retook the lead with points from O’Carroll and Mark Barry.

A McNamee free and a point from Offaly’s highly-rated Cian Johnson minutes after his introduction had the Faithful men level once more with 20 minutes to go.

The momentum swayed in Offaly’s favour as they rattled off the next four points to take a lead they would hold until the finish. Johnson (2), Niall Darby and McNamee all lifting white flags while Laois were reduced to 14-men due to O’Carroll’s black card.

Laois kept in touch with two points from Ross Munnelly, now playing in his 18th inter-county season, as well as another from Killeshin’s David Aston, but Offaly held out for the win.