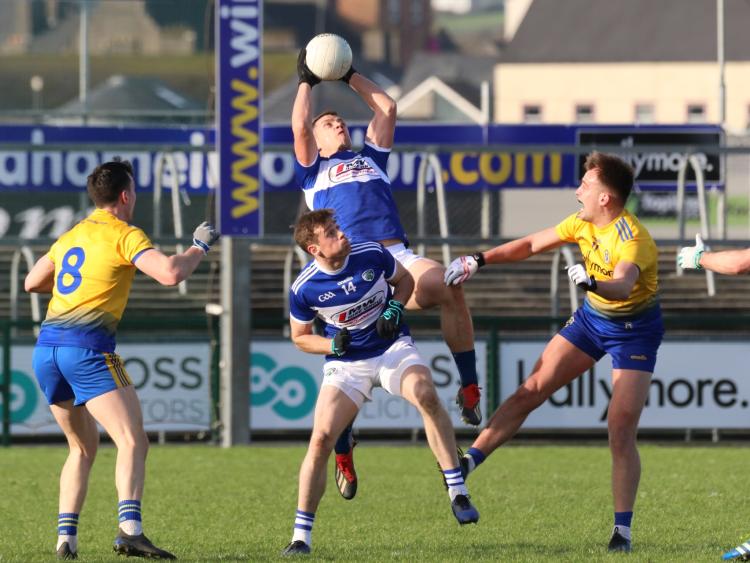 The Laois senior footballers emerged with their share of the points at Dr Hyde Park, Roscommon with a late brace of goals rescuing a result after a hugely entertaining game of football.

A stunning Evan O'Carroll goal gave Laois a fighting chance with a minute to go, and then captain Kieran Lillis salvaged a draw in the fourth minute of injury-time from Ross Munnelly's hopeful ball in.

Roscommon were first off the mark with a Cathal Cregg point inside the first three minutes, but Laois wiped the slate clean two minutes later when Evan O'Carroll converted a '45 after seeing his own shot deflected out.

Roscommon kept in the lead with points from Enda and Donie Smith either side of a Colm Murphy point for Laois with ten minutes played. Laois hit two-in-a-row through Kieran Lillis and O'Carroll to take a slender lead, but Roscommon were back on level terms by the 15-minute mark with a Donie Smith free.

The next two points went the way of the visitors with Michael Keogh and O'Carroll edging Quirke's men two points clear. Roscommon restored parity by the 29th minute through Shane Killoran and full-forward Cian McKeon with half-time on the horizon.

A Colm Murphy point and a Kieran Lillis mark were returned by Donie Smith before Niall Kilroy strolled through the Laois defence and rolled the ball past Niall Corbet in the Laois goals.

Laois lifted the final white flag of the half from an Evan O'Carroll mark to send them in trailing by the minimum, 1-7 to 0-9.

Kieran Lillis reopened the scoring with a beauty from the outside of his left boot to tie up the proceedings, but Roscommon found their stride to hit the neet three without reply. A Cian McKeon free was closely followed by scores from Niall Daly and Donie Smith as the Rossies pulled in front.

Evan O'Carroll saw a glorious goal chance go astray 50 minutes in, but expertly converted the resulting '45 to narrow the deficit. Laois cut the Roscommon lead to the minimum shortly after when substitute Ross Munnelly - coming in for 18th inter-county season - popped over a free from just outside the D.

McKeon and Munnelly went on to trade frees as the gap remained at a point heading into the final stretch.

Niall Kilroy found himself through 1-on-1 with Corbet, but Mark Timmons made a last-ditch tackle to drag down the Fuerty man before he could get his shot away. Timmons rightly received a black card for his troubles and Enda Smith dispatched the resulting spot-kick past the former League of Ireland goalkeeper.

Roscommon compounded their lead with points from Enda Smith and substitute Hubert Darcy as Cunningham's side began to pull clear. Then, with a minute to go in normal time, Evan O'Carroll unleashed a stunning goal to the Roscommon net and Laois were right back in the reckoning.

A nervous groan echoed from the stand as five minutes of injury-time were signalled, followed by an exchange between the in-form O'Carroll and the recently introduced Noel Gately before Laois played their final card.

Ross Munnelly floated it into the square from a free and Kieran Lillis scooped up the breaking ball and fired home to seal a well-deserved point for the travelling O'Moore men.