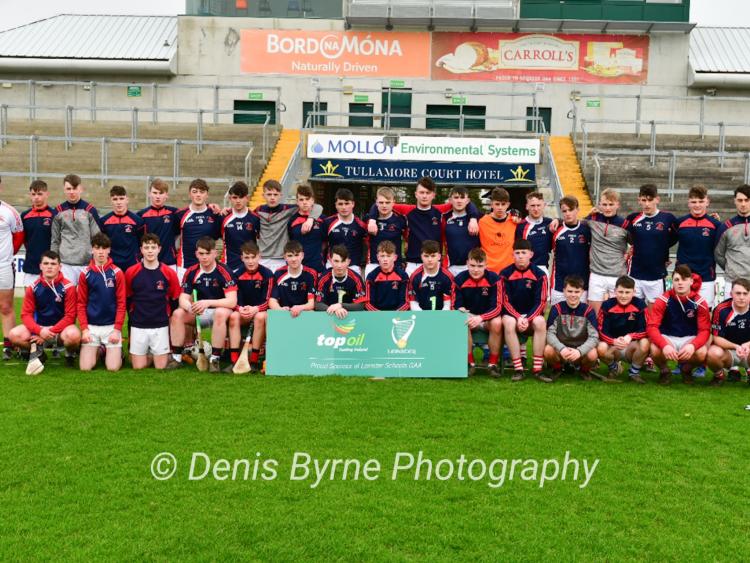 St Brendan’s CS, Birr were crowned rest of Leinster Senior ‘B’ hurling champions on Saturday as they overcame a spirited Mountrath CS side with a convincing victory played in howling winds in Bord na Mona O'Connor Park, Tullamore.

St Brendan’s were a class apart on the day with Luke Nolan and David Tooher their star turns. With the aid of the breeze in the opening half, they built up a 1-15 to 0-4 half time lead while second half goals from Gearoid McCormack and Shane Ryan ensured that the gallant efforts of Mountrath wouldn’t stop the Offaly men from claiming the title.

St Brendan’s played with the aid of the strong breeze in the opening half and they didn’t waste any time setting out their stall.

With just 35 seconds on the clock, John Coughlan opened the scoring for the Birr School. Mountrath were not in Tullamore to make up the numbers though and they actually snuck into the lead with two placed balls from Dan Delaney after four minutes.

With the wind howling straight down the field, St Brendan’s began to pull away with the combo of Luke Nolan and David Tooher really leading the way.

Nolan landed two while Tooher grabbed his first as they led 0-4 to 0-2 on 10 minutes.

From that juncture, they kicked on and a goal from Tooher a minute later really put them into the driving seat.

Tomas Keyes managed a point for Mountrath but that would be their last score until the 29th minute of the half as the Offaly school meant business.

Tooher and Nolan were the leading lights as they moved 1-8 to 0-3 ahead before John Coughlan got his second of the half with 10 minutes left to half time.

David Tooher brought his first half tally to 1-7 while Luke Nolan moved on to 0-5 as St Brendan’s went in at the break having made full use of the elements leading 1-15 to 0-4.

There was always going to be a kick in Mountrath after the restart and they landed the opening three points of the half through Tomas Keye, Tadhg Cuddy and Dan Delaney to bring it back to 1-15 to 0-7.

The Laois men were then hit with a sucker punch as Luke Nolan took off on a lung-busting run, picked out Gearoid McCormack and the Coolderry man found the net with a rasper of a shot to make it 2-15 to 0-7 after 37 minutes.

Dan Delaney kept Mountrath ticking over but the result was put to bed on 45 minutes when Shane Ryan got in for St Brendan’s third goal giving them a 3-16 to 0-9 lead with 15 minutes to play.

The final 15 minutes petered out naturally and while Mountrath kept going until the bitter end, including a consolation goal from Jer Quinlan in stoppage time, there was no doubting the supremacy of the St Brendan’s men.