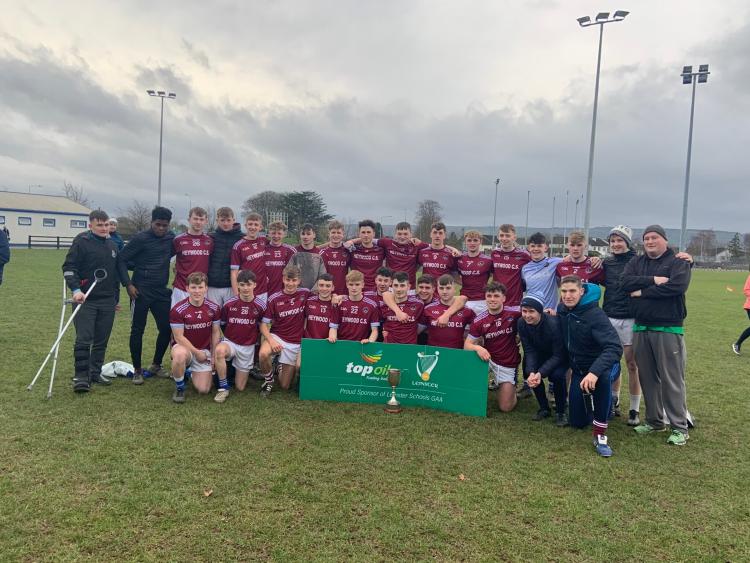 Dublin school St Colmcille's struck late in Abbotstown today with a late blitz that ensured they claimed the Leinster 'C' football title over a gallant Heywood CS side.

With the sides level heading into the final minutes, St Colmcille's sent over a point to edge them ahead. Disaster struck for Heywood from the resulting kick-out as the Knocklyon based school got in for a goal, and while Heywood pushed up in search of a goal of their own, St Colmcille's caught them on the break and netted their second with the game all but over.

Playing with the aid of a stiff breeze in the opening half, Heywood went in a goal to the good on a scoreline of 1-4 to 0-4. Their points arrived from Brian Whelan (2), Mark Kehoe and James McWey while Cathal O'Shaughnessy was on hand to slot home the goal for the Ballinakill school.

Both sides were reduced to 14-men in first 30 minutes, Heywood losing O'Dempsey's midfielder Fionn Holland to a yellow and black card and St Colmcille's their full-forward to a straight red.

St Colmcille's battled back to level within minutes of the restart, but Heywood were back in front by the third quarter thanks to a brace of points from Ballyroan Abbey duo James McWey and Dylan Cuddy.

Boosted by the wind behind their backs, St Colmcille's took the initiative and rattled off the next three to take a slender one point lead. McWey's third of the game brought Heywood back on level terms with five minutes to go, but their Dublin opposition finished with a 2-1 flourish to seal the Leinster 'C' crown.