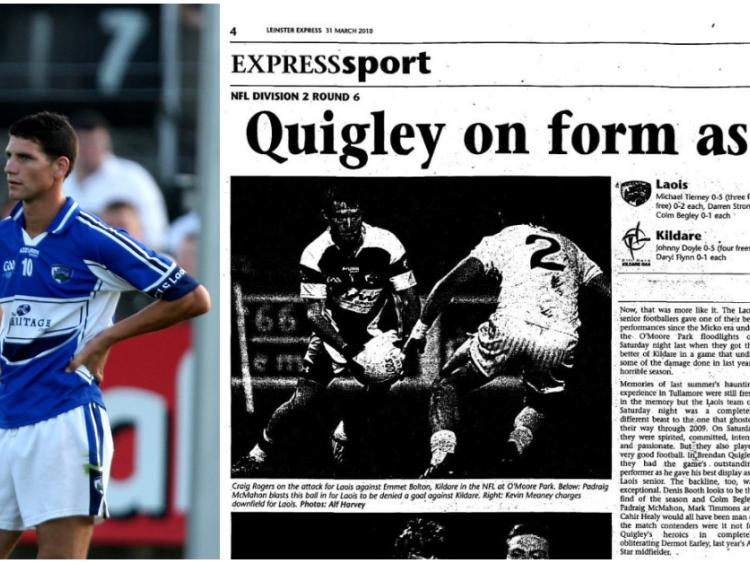 *This article was published in The Leinster Express on March 31, 2010

Read the 'Game at a Glance' - here

Now, that was more like it. The Laois senior footballers gave one of their best performances since the Micko era under the O'Moore Park floodlights on Saturday night last when they got the better of Kildare in a game that undid some of the damage done in last year’s horrible season.

Memories of last summer's haunting experience in Tullamore were still fresh in the memory but the l^ois team on Saturday night was a completely different beast to the one that ghosted their way through 2009. On Saturday they were spirited, committed, intense and passionate. But they also played very good football. In, Brendan Quigley, they had the game's outstanding performer as he gave his best display as a Laois senior. The backline, too, was exceptional. Denis Booth looks to be the find of the season and Colm Begley, Padraig McMahon, Mark Timmons and Cahlr Healy would all have been man of the match contenders were it not for Quigley's heroics . in completely obliterating Dermot Earley, last year's All-Star midfielder.

If anything Laois could have won by more. They kicked a string of wides and missed four goal chances and had they converted even a percentage of them they could well have inflicted a beating and put up a score just like Kildare did on Laois last summer.

In any case it didn't matter. Prior to Saturday's game, Laois needed a win from one of their remaining two games to maintain their Division 2 status. That's done now and they can go to Newry on Sunday week without the threat of relegation hanging over them.

But important and all as the result was, the performance was even more important. As selector Dermot Murphy, hinted at afterwards, a performance like this has been bubbling for some time. And at the end of a busy month, Laois can look back on four decent performances that included two good wins and two one-point losses that could well have been reversed.

All the talk might have been about Laois needing to avoid relegation but in the last four weeks, their form has been more of a team going for promotion, rather than one trying to avoid the drop.

And suddenly the championship can't come quickly enough. Laois play the winners of Meath and Offaly in the Leinster quarter-final and should they get to a semi-final, then Dublin are likely to be waiting for them. Is it too soon to be imagining a big day out in Croke Park even if it's only in June?

The management will want to keep things in perspective of course but they'll be delighted that an improved attitude has resulted in improved results.

Here Laois gave Kildare a three-point headstart in the opening six minutes but they didn't let their heads drop and when they kicked six points on the trot, we could sense something big was going to happen. Quigley was lording midfield (he won six kickouts in the first half and three more in the second) and the backs were frustrating Kildare no end. On one occasion Johnny Doyle was blown for hopping the ball twice as he struggled to get away from Cahir Healy while Healy, Booth, McMahon and Timmons all made brilliant blocks as Kildare could find no way through.

Up front Michael Tierney again led the way. As well as landing three frees, he kicked two from play (one off each foot) and Craig Rogers, Donie Kingston (free) and Danen Strong all pointed as well to help Laois to a 0-8 to 0-5 lead at the break.

A Johnny Doyle free reduced the gap to two three minutes after the restart but Padraig McMahon cancelled that out when he came forward from his wing-back position to blast over from close range. Another free from Doyle got the difference back to two but Laois assumed control again and by rights should really have kicked on.

The otherwise impressive Kevin Meaney missed two good chances in quick succession while Craig Rogers could have had a penalty before Michael Tierney saw his goal chance blocked.

Quigley also missed a good chance but Colm Begley stopped the rot when he kicked the score of the game after good work from Kingston. Again Kildare responded, this time through Earley, but Rogers, Kingston and Meaney all found the range to put Laois five clear with four minutes remaining and at last they had the breathing space they needed.

Doyle kicked one last free but by then the Kildare crowd were heading for the exits.

A good night’s work for Laois, then. At last, it seems, things are looking up.