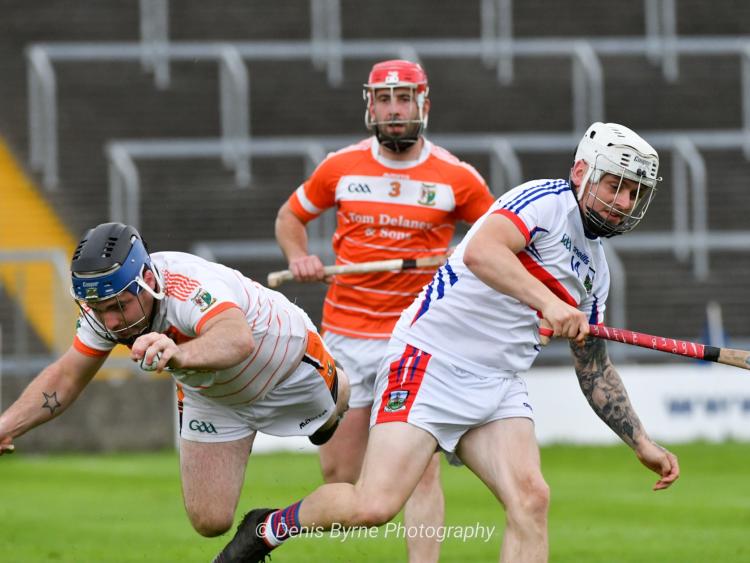 With Ben and Ciaran Conroy excelling, they took the game to Colt Shanahoe and after a hugely physical battle, they came out five point winners.

A teak tough game of hurling, Colt Shanahoe will look back on their nine first half wides while some key misses at vital stages of the second half also scuppered their chances.

Slieve Bloom hit seven points on the spin from the 37th to the 45th minute in what was a game defining spell for the victors.

Both teams were clearly up for the game with no quarter been asked or given early on.

James Keyes opened the scoring for Colt Shanahoe and although Ben Conroy levelled, Rhian Bergin landed over the first of his three first half points to make it 0-2 to 0-1 in favour of the newly amalgamated Colt Shanahoe.

Slieve Bloom then hit a purple patch with two points from Ben Conroy and one from Ben Shore pushing them into a 0-4 to 0-2 lead.

Colt Shanahoe were staying in touch but Slieve Bloom looked that bit sharper early on and another Ben Conroy free pushed them into an 0-5 to 0-3 lead after 16 minutes.

Conroy then pucked the score of the half from a tight angle and while they were moving well, Colt Shanahoe went on to puck nine first half wides.

James Keyes landed a second point for himself but Ciaran Conroy chipped in with two more points for Slieve Bloom before half time as they led 0-8 to 0-6 at the sounding of the half time whistle.

The competitive nature of the game didn’t fade in the second half either and while the scores were scarce in the opening minutes, the will to win wasn’t.

Rhian Bergin landed a ‘65’ but points from Tadgh Cuddy and Fearghal Burke put Slieve Bloom into a 0-10 to 0-7 lead after 40 minutes.

Ciaran Conroy really exploded into the game in the second half and in a game where there were a lot of frees, some of Conroy’s scores were superb.

They were on top all over the field and Colt Shanahoe, while making opportunities, just hadn’t the radar tuned in to the level required.

They got it back to a four point game but that was as good as it got as late points from Ciaran and Ben Conroy gave Slieve Bloom a fully deserved five point win.