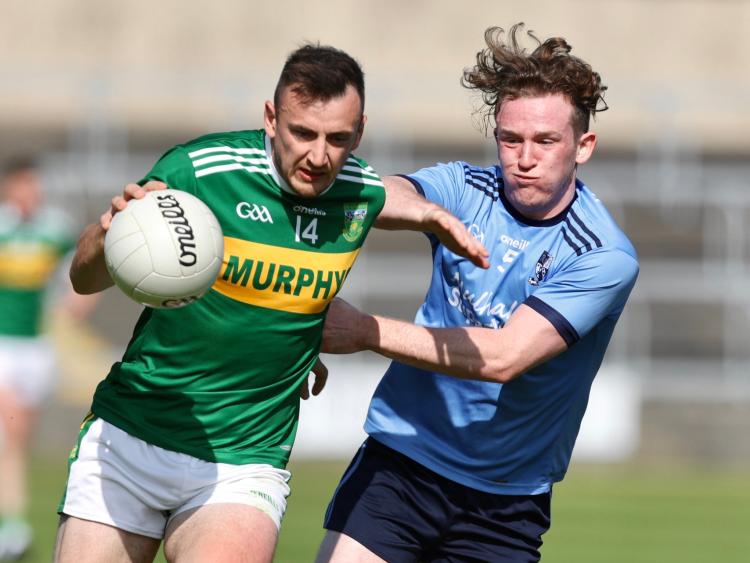 Ballylinan's four goal glut at MW Hire O'Moore Park puts them safely through to the quarter-finals of the Laois SFC, but only after riding a Ballyroan Abbey second half comeback that saw them come within two points after being nine points down early in the second half.

Ballylinan dominated the opening half playing the more fluid football and easily could have gone in at the break with double their scoreline. Ballyroan set up defensively from the offset and their counter-attacking brand failed to ignite as Ballylinan poked holes almost at will.

They staged a gutsy revival in the second half and narrowed the deficit which had been nine points at one stage down to two points before Ballylinan got in for their third and fourth goals to see them through to the quarter-finals.

Ballyroan Abbey welcomed back Padraig McMahon for this encounter and their former player-manager got them off the mark seven minutes in with a close range mark, but only after five wides from both sides in the initial stages.

Ballylinan began to gather momentum thereafter and with Gary Walsh looking lively they went on to slot 1-2 without reply. Walsh settled his side after five early wides with his first of the day from a free 11 minutes in, and he added a second directly after.

A pinpoint pass over the top from Jamie Farrell found Walsh on the edge of the square right before the water break, and the potent attacker easily finished to the net despite the best efforts of Adam Dunne and goalkeeper Andrew Bonham to leave the score at 1-2 to 0-1.

Ballylinan continued to cause problems for Ballyroan after the restart as they forced another fine save from Bonham. With 25 minutes played Walsh brought his tally to 1-3, Ballylinan's total, after he twisted and turned and popped it over under severe pressure.

They almost had another goal straight after when Cathail Dunne broke through and blazed wide from point blank range. Ballyroan replied with their first score in 20 minutes, again through McMahon, to stem the constant Ballylinan attacks, but Mick Lillis' side kept coming.

Ballylinan almost had another goal Walsh's initial shot was saved and the ball was cleared off the Ballyroan line twice in quick succession. They didn't have to wait long for their second goal to arrive, however, as Walsh won and converted a free himself before Liam Kealy bundled the ball over the line to draw the half to a close with Ballylinan leading 2-4 to 0-2.

Ballyroan Abbey emerged for the second half with intent and dropped their sweeper approach which reaped rewards almost instantly.

Diarmuid Whelan sent over the first of the half after just 30 seconds but Walsh was on hand to annul his effort directly after with a perfectly measured score from under the stand, and he added another two minutes later as Ballylinan led by nine points.

Ballyroan Abbey took the game by the scruff of the neck and staged a comeback. A Diarmuid Whelan free set it in motion and Aaron Carroll closely followed before the goal arrived. Substitute Brian Whelan received the ball on the terrace wing and cut in to square the ball to the awaiting Sean Murphy to fist to the net.

Whelan stepped up to convert a 21m free right before the final water break to send them into the huddle with a one goal deficit having been nine points down at the start of the half.

They shaved it down to two points right after with Brian Whelan's first of the game, but that was to be as good as it got as Gary Walsh got in for his second goal of the game to take the sting out of the Ballyroan attack. Brian Whelan landed another, this time from a free, but Ballylinan closed out the game strongly with Larry Kealy adding their fourth goal before Walsh drew the curatin down with a beautiful point in injury-time.