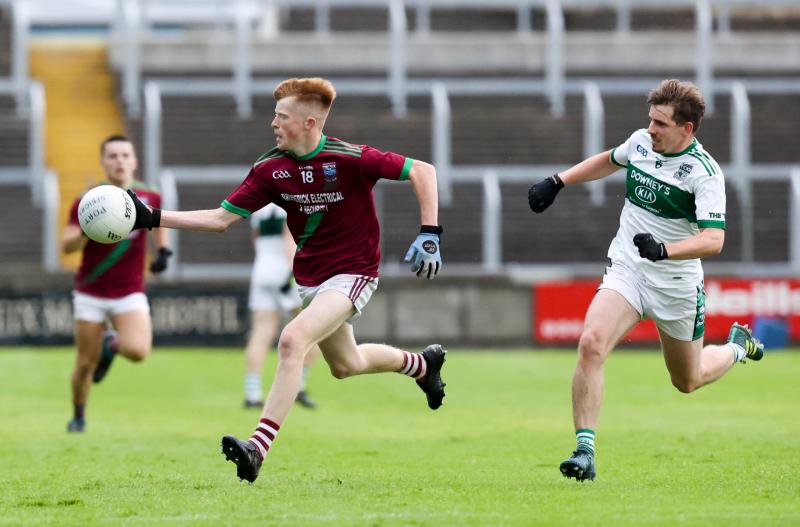 The county champions still came out victorious though, as they showed their strength in depth to hold off Portlaoise's second half burst and send out a statement that they are indeed the top dogs in Laois.

Portlaoise put together a few nice moves after that but couldn't apply the finishing touches. Benny Carroll played a nice one-two with Paul Cahillane, but just as he was about to pull the trigger, Portarlington defender Jason Moore executed a brilliantly-tackle. Portlaoise then put together a nice handpassing move involving Kieran Lillis, Conor Boyle, Damon Larkin and Gareth Dillon, but Dillon's final handpass to Paul Cahillane was misplaced.

Portarlington's Jordan Fitzpatrick punished their opponents lack of ruthlessness up front by knocking over the first point from play, and shortly after the first goal arrived, and it went the way of the county champions.

Sean Byrne sent a high ball into the Portlaoise square, which veteran Cathal Ryan, who usually plays in the backs, caught well. Ryan swiftly offloaded to Sean Michael Corcoran, who found Jordan Fitzpatrick in the square, and he buried it to the net.

Conor Boyle floated over a lovely score from distance for Portlaoise just before referee Maurice Deegan blew the whistle for the first water break, with the scoreline 1-3 to 0-2 in favour of Martin Murphy's charges.

Colm Murphy caught a mark and duly curled it between the uprights a few minutes after the restart, with Portarlington's defence on top. Paul Cahillane did answer for Portlaoise though, as despite being surrounded by a few Portarlington bodies, he found just enough room to fire over.

Portlaoise left a few shots short after that, with Benny Carroll and Paul Cahillane failing to catch hold of efforts against the wind. Colm Murphy wasn't making the same mistake down the other end for Portarlington, as he received a lovely ball in from Sean Michael Corcoran, and Murphy calmly fisted over.

Portarlington fired their second goal in just before the half-time whistle left. Colin Slevin went bursting forward at pace from the backs, and when Colm Murphy hand passed to him on the run, Kieran Lillis took Slevin down just as he was about to pull the trigger. Ronan Coffey, who was only substituted on moments earlier, dispatched the penalty with ease.

Portlaoise started the second half brightly, as strong running and quick inter-changing handpasses allowed Paul Cahillane the space to send one between the posts. It took a few minutes for the next score to come, but DJ White had an instant impact off the bench by slotting over another.

The gap was closing now, and Paul Cahillane reduced proceedings to a five point game seconds later by swing over his third for Portlaoise. Portarlington did end their drought though through Adam Ryan, who fired over their first score of the half from close range.

Portlaoise replied to that with a much-needed goal to bring the game to life. Portarlington goalkeeper, Sean Mooney, fumbled a ball inside, and Portlaoise substitute Michael Culliton immediately put him under pressure. Mooney was forced to give the ball up, and Culliton pounced to fire into an empty net.

Portarlington responded well to the setback though, as Rioghan Murphy, who was the man of the match in the county final last weekend, kept his composure under pressure to curl over a stunning score.

Portlaoise corner-forward Ricky Maher pointed over a simple free after more strong running from the Portlaoise half-back and half-forward lines. They now only trailed 1-7 to 2-7 in this league final.

A few minutes into the resumption of play, and Portlaoise had cut the gap back to two points. Pau Cahillane held the ball up well inside, showing his composure, and fed Gareth Dillon, who was coming like a train. Dillon knocked it over, and the momentum was with Portlaoise.

Portarlington responded through substitute Jake Foster, who sold a lovely dummy before curling one with his left under pressure. However, Portlaoise levelled matters with a penalty of their own in the fifty-fourth minute.

Kieran Lillis struck a shot off the crossbar with his first attempt, but as he was going to pick up the rebound, Cathal Bennett slid in and fouled him inside the square. Cahillane stepped up to take the spot-kick, and he sent Sean Mooney in goals the wrong way.

Portarlington edged back in front though, with Ronan Coffey afforded the opportunity to tap over an easy free after poor indiscipline from Portlaoise's defence.

Portlaoise had chances to equalise in stoppage time, but Kieran Lillis and Gareth Dillon sent their shots wide of the post and Portlarlington held on.

STOP THE PRESS!!! Eight players sent off in Minor club game in Donegal