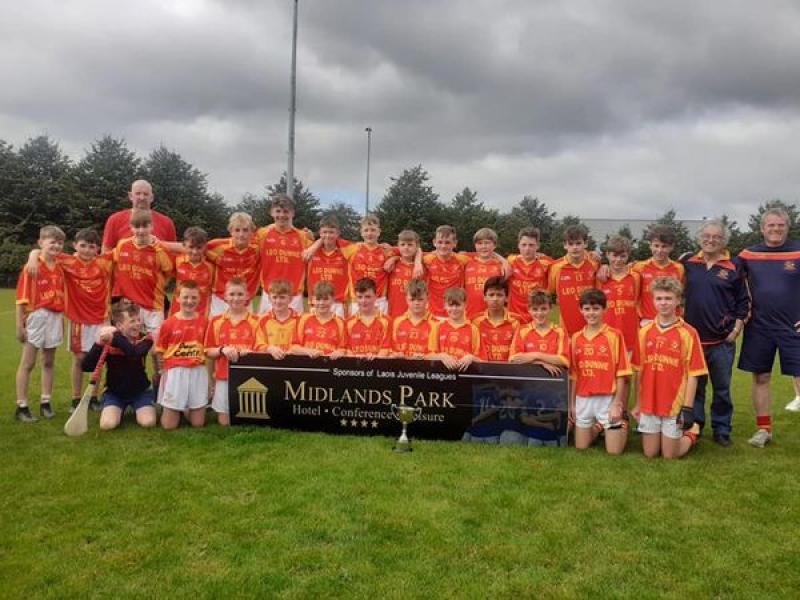 The Harps kept the good times rolling on Sunday morning as they added more silverware to their collection by claiming the U13 'A' hurling title.

At a sun kissed LOETB Centre of Excellence, they edged out a gallant Park-Ratheniska Timahoe who had made a dramatic comeback in their win over Portlaoise in the semi final.

The Harps entered the game as favourites and they didn't waste any time in setting out their stall either. Two early scores from Eoin Delaney had settled them into the game nicely but their opponents were not there to make up the numbers and Park-Ratheniska Timahoe struck for goal against the run of play with Cillian Dunne finishing off a fine move to the net.

Park-Ratheniska Timahoe maintained their slender advantage and led at the first water break but the break gave The Harps the time to settle down and get back into their groove.

Matt Cunningham and Eoin traded scores before the eventual victors struck for goal and it proved to be a game defining score.
Jay Brophy fired to the net and it was a real sucker punch as it extended their lead and they went in at the break in a comfortable position leading 1-8 to 1-2.

While it may have looked like they had one hand on the cup, Park Ratheniska Timahoe had other ideas and with them holding The Harps to just one point in the second point, they set about eating into the arrears.

Matt Cunningham was the man leading the charge and his brace of points gave them renewed hope. He added two more frees before the second water break and now with only two points in it, it was game on again.

The final quarter saw both defences come to the fore and try as they may, Park-Ratheniska Timahoe couldn't find any more scores against the stern Harps defensive unit. Goal chances went a begging at both ends but the dangerous two point lead was extended out to three when top scorer Eoin Delaney fired over a point for The Harps in injury time to give them a bit of breathing space and a three point win to lay claim to the title.