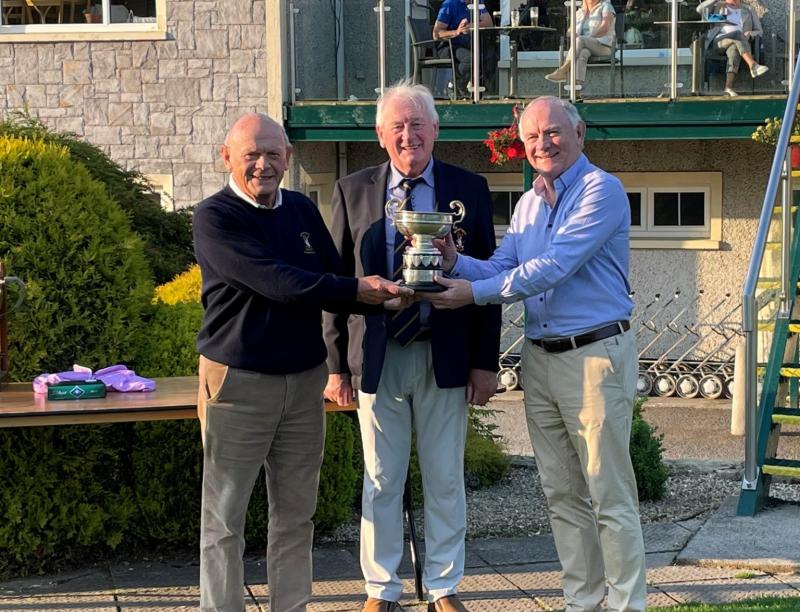 Away from all the excitement of the Olympics, The William Waller Cup competition was played in glorious weather at the serene and beautiful setting at Portarlington Golf Course on Sunday 1st August.

This annual prestigious Competition sponsored by the club’s trustees, proved to be a history in the making event for the one local family, as the winner and outstanding sporting legend, Martin Turley, is a brother of Club trustee sponsor Michael with both past Captains, Presidents and lifetime members of Portarlington Golf Club.

Normally this result would hardly raise an eyebrow, however on further analysis some interesting statistics come to light.
It is a reflection of Martin’s character that at his stage in life, he still competed at the highest level, obliterated high handicappers in the process, and by continuing to compete just for the honour, as this is what golf is all about.

Martin’s outstanding success will go down as one of the most memorable achievements in his illustrious sporting career, for he also represented Offaly at minor, junior and senior level and did so with distinction and had multiple successes at all levels.

In his early days Martin, like lots of pupils from Patrick St, Shandra and Kilmalogue played his schools football in Laois as part of the CBS team, as Gracefield did not enter the Offaly schools competition at that time, however his career took off in when he played minor level with his county in 1957, aged 15, he came on as a sub against Kildare.

He played minor for the next three years and won a Leinster title in 1960 only to be defeated by Galway in the All Ireland semi final by three points, no mean achievement by any standard, but all the more notable when this Galway team matured and went on to win 3 in a row ’64, ’65 ’66.

He was part of the successful St.Patrick’s area team, combining Gracefield and St Mary’s, when winning the Offaly Senior title in 1959. Gracefield won the intermediate title in 1960 and promotion to the senior division which they won at the first attempt in 1961.

More history in the making came in 1970 when Gracefield became the first team to win the Leinster senior club championship, only to fall to a very strong multi club combination of East Kerry side that included several county players and following this, area teams were excluded from the club championship.

Martin was part of the Offaly Junior team that won the Leinster title in 1972, and gained senior success when playing 3 times for Offaly’s double All Ireland side also in 1972.

He also excelled on the rugby pitch and was banned in the ‘60’s for playing rugby but like a number of other football greats, he returned after the ban was lifted.

Having spent his younger years on the Offaly side, Martin like a lot of others in Portarlington ‘crossed the Barrow’ and settled down to married life with his wife Bernadette on the Laois side, which meant the next generation of Turley's played for O’Dempseys, which at that time was one of the main supplies of talent to the county teams, where notably his son Leo won several club honours and who achieved several successes with Laois and proved to be a role model for lots of younger players.

With another son Michael now living in Dublin, the sporting successes of the Turley prodigy continue, as his son Freddie has been honoured as Ireland U15 captain in soccer this year, and recently brother Jake returned to Portlaoise, as goalie with a gallant Dublin U20 side that went down to an Offaly team that went on to win the All Ireland title.

The presentation was a very unique event with Martin being presented with the historic William Waller trophy by younger brother Michael, on behalf of the current Trustees, Pat Byron, Pat Kitson and Seamus Walsh.

Despite her position in the event finishing outside the medals at her second Paralympics, said she was happy with her swim. See interview below.

Nicole, 19, from Portarlington will be competing in two other categories in the Tokyo the 100m Breaststroke and the 200m Individual Medley.

See photos from her first final taken by by Sam Barnes/Sportsfile taken on Wednesday, August 25.