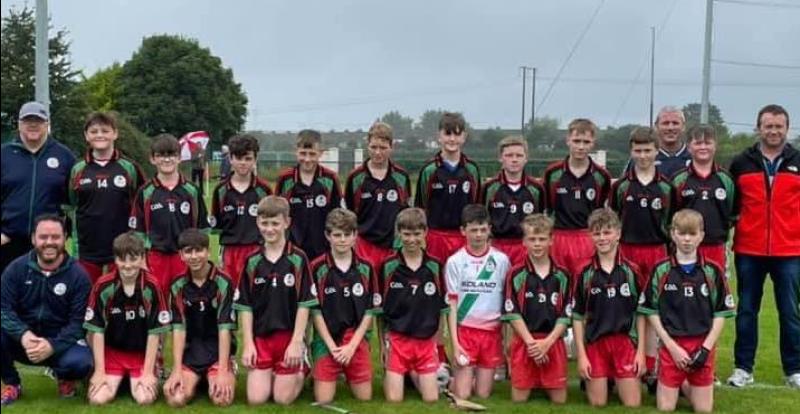 Two of the great hurling clubs met on Saturday for the right to be crowned U13 'B' hurling champions and like so many times in the past, they didn't disappoint as they served up a classic encounter in extremely challenging conditions.
What started off as a nice morning for hurling soon deteriorated as the sides battled through normal time and extra time before the young men from Borris-Kilcotton came out on top.

Calum Jones led the way for the victors while his opposite number Kyle Handcock drove Rathdowney-Errill on all morning.
Both men opened the scoring for their side before Handcock nailed three in a row to give the Rathdowney-Errill men an early buffer. Chances were going a begging at both ends but they stayed plugging away.

Handcock and Matt Bowe stretched out the Rathdowney-Errill advantage and while the game may have been started to slip away from the Borris-Kilcotton youngsters, they soon got themselves back into the game with the opening goal of the final just before half time.

Callum Jones sent in a long ball and getting on the end of it was Paddy Fitzpatrick who finished well to the net to bring them to life.

Despite the missed chances, that goal meant the sides went in level at the break – 1-4 to 0-7 with the game well and truly in the melting pot.

William Bergin produced a fine save in the early stages of the second half before Handcock and substitute Ross Quinlan traded scores to keep parity.

Rathdowney-Errill then looked like they were going to steal a march with Handock again on target before a long ball in from Cillian Stenson deceived the Borris-Kilcotton rearguard and found its way to the net to put them four up as the game drifted into the final quarter.

Callum Jones brought it back to a three point game but both sides squandered late chances to help their cause. With only three minutes to go, that man Callum Jones came up trumps for Borris-Kilcotton with his close range free going straight to the net to force extra time.

As the rain began to pour, extra time began with Handcock and Jones picking up where they left off and added a point each.
Paddy Fitzpatrick then edged Borris-Kilcotton in front before a superb point from Ross Quinlan left them two ahead with the end line in sight.

Jones then finished off the scoring with two more scores as they won out by four points in the end.