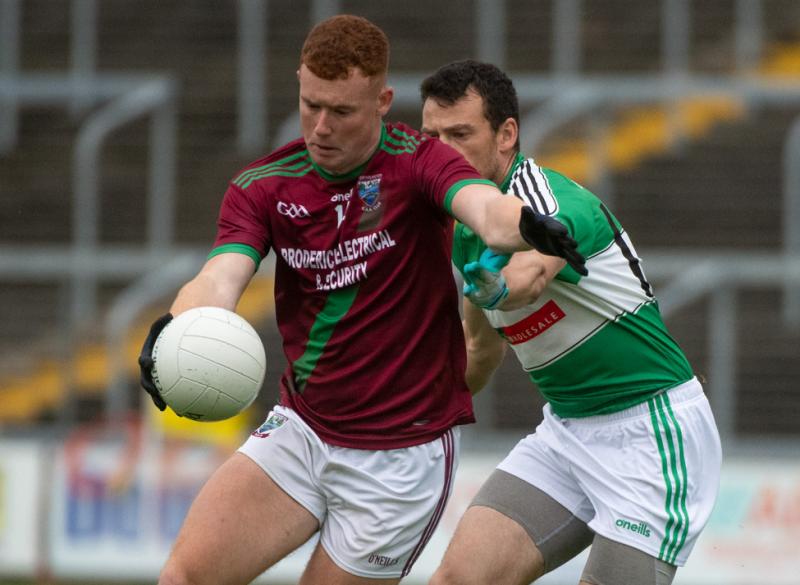 Portarlington survived a ding dong battle with Ballyfin on Saturday afternoon to get their defence of the Laois senior football championship off to a winning start. Ballyfin were a shadow of the team that put in a disappointing display in the 2020 semi final last month and they really asked some hard questions of a Portarlington team minus the services of keeper Scott Osborne, Robbie Piggott and Ronan Coffey while Paddy O'Sullivan only came on as a sub.

Sean Moore was on fire for Ballyfin and along with Sean Byrne in the middle of the field for Portarlington, they were the best on show in an entertaining game of football.

Sean Moore kicked Ballyfin into an early lead with a free as a low scoring opening quarter played out. Jake Foster levelled matters in the fourth minute as both sides went on to prove wasteful in the opening stages.

James Finn kicked over a sublime effort to put Ballyfin back in front just shy of 10 minutes but Port would turn the tables before the water break through points from David Murphy and a fine Adam Ryan score.

Murphy added another just after the water break and on 21 minutes, they hit the net. A well constructed and patient build up allowed Adam Ryan to cut through the middle and his cool finish found the bottom corner to put Port 1-4 to 0-2 in front.

While the feeling might have been that Port would pull away at this stage, Ballyfin knuckled down and began to eat into the lead with Sean Moore leading the way.

Moore kicked a mark and a free in quick succession to leave it 1-4 to 0-4 on 26 minutes before adding another free a minute later with Port corner back Cathal Bennett picking up a black card in the process.

It was all Ballyfin up until the half time whistle with Louis Duff adding their second mark to leave just a point between them.

Port did manage to land the final score of the half through a Jake Foster free as the reigning champions held a 1-5 to 0-6 half time lead.

Ballyfin roared out of the blocks at the start of the second half. An outstanding outside of the boot score from James Moore set them motoring before another Moore free had the sides level on 32 minutes.

Moore added another curling effort to push Ballyfin ahead a minute later but Sean Byrne landed a point from distance to settle Portarlington back into the game and put the teams all square again.

Adam Ryan got a stroke of luck when his tame effort bounced in front of Ballyfin keeper Eoin Connolly and over the bar but once again, that man Sean Moore was on hand with a free to level matters on 43 minutes.

It was tense and tight, a far cry from a few weeks back when they met in the 2020 semi final.

Ballyfin missed a golden opportunity of taking the lead just before the water break when James Finn saw his shot, that was destined for the corner of the net heroically saved by Port keeper Sean Mooney. With the resulting attack, Port came down the field and Sean Byrne kicked over to add a further blow to the Ballyfin men.

Sean Moore was in serious form all afternoon and he kicked a sublime effort of his left foot with 10 minutes to go to level it up at 1-8 to 0-11.

Jake Foster kicked a rousing score to put Port back in front before another Sean Byrne score from distance gave them a bit of daylight with seven minutes to go. Ballyfin had come this far and were not going to go down without a fight.

Sean Moore clipped over another free to narrow the gap to the minimum before Jake Foster landed his third of the day three minutes from time to leave it 1-11 to 0-12.