'Picky' puts in sensational display to power Clough-Ballacolla to victory 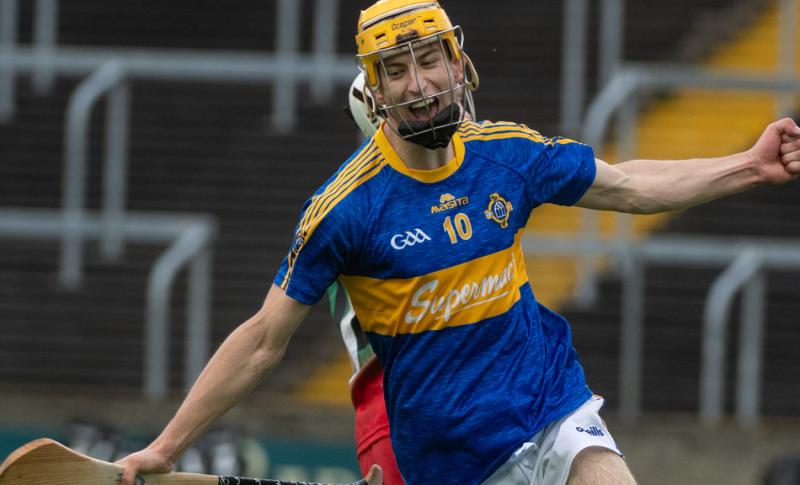 The Senior and Premier Intermediate county champions for 2020 met in the first round of the 2021 Senior championship after a week delay due to a Covid outbreak in The Harps camp.

Despite a very competitive first half performance from The Harps, Clough-Ballacolla, led by Stephen 'Picky' Maher, showed exactly why they are the Senior county champions in the second-half to ease to an opening round win in the end.

The Harps began brightly in the opening game of the four in O'Moore Park on Sunday, as they registered three of the first four scores. Pat Walshe pointed the first from play, with Lanigan landing two points from placed balls. Stephen 'Picky' Maher pointed Clough-Ballacolla's sole score.

Clough-Ballacolla gradually grew into the game, with Jordan Walshe and Stephen Maher (free) points levelling the game. Michael Lanigan replied for The Harps with a fine score out near the side, but two more Maher frees had Clough-Ballacolla in front for the first time.

The reigning Premier Intermediate champions were well up for this one though, as Eoin Clancy grabbed his first point, before John Brophy edged The Harps back ahead.

The sides exchanged scores for the next few minutes, with Lanigan and Maher swapping scores at either end. The Harps did manage to string together a few to put themselves back into the initiative. Lanigan was to the fore once more, as he scored two points, with one an absolutely stunning sideline cut.

However, the main incident that occured in the first half was at the 28th minute mark. with Michael Lanigan suffering an injury to the head after a strong challenge from Clough-Ballacolla. This resulted in a bit of a scuffle, with Clough-Ballacolla's Jordan Walshe and The Harps' David Doheny receiving yellow cards for their part played.

In the next possession, Stephen Maher played a quick free to the onrushing Aidan Corby from midfield, as The Harps were caught asleep. Corby bore down on goals before finishing low to the bottom right corner of the net.

Evan Deegan landed the last score of the half for The Harps from a free, with the scores level and the game finely poised at half-time.

The Harps main man, Lanigan, returned to the field for the second half, and he landed another free after strong running from Daniel Comerford. It was all Clough-Ballacolla though for the rest of the third quarter, as whatever was said at half-time to them, worked.

Stephen Maher (free), Robbie Phelan and Mark Hennessy fired over points for them, and between all of that they almost had a goal. Maher's long-range free dropped short in the square, and Stephen Bergin was alive to the breaking ball. It looked like a certain goal, but The Harps keeper Peter Walsh pulled off a jaw-dropping save to deny.

However, the second goal that Clough-Ballacolla threatened did eventually come, as Maher pointed another free before he finished one into the bottom left corner of the net.

If that was bad enough for The Harps, things got worse moments later. Richard Saunders received a second yellow card, and they were down to fourteen men.

Further points from Maher (free) and Stephen Bergin meant Clough-Ballacolla led 2-15 to 0-13 at the second water break, and what looked like a promising game at half-time, was all but over fifteen minutes later.

Clough-Ballacolla continued to assert their superiority in the last quarter as well, with Maher, John Dwyer, Aidan Corby and Stephen Bergin all getting in for further points to round off a solid display from the Senior county champions.

DOWN MEMORY LANE: A look back in time through our sporting archives